This was the note that I took in a class-discussion session (sinh hoạt lớp) in 10th grade at my high school. This was what my head teacher (giáo viên chủ nhiệm) talked about among many things he talked in the usual sessions. Back then, I had a habit of writing down things that were the most appealing to me during these sessions. 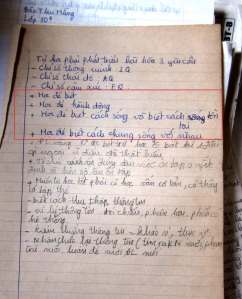 Visiting home in Hanoi 2015, I found this note when I was, again, digging into my childhood treasure box.

I’ve typed the note here in case you can’t read my hand writing (FYI: I was not proud of my reputation of always being in the top 3 – 5 worst hand-writing students in the class from elementary to high school)

Recently, while I was doing the translation work with CVD folks, I bumped into this document on Four Pillars of Education – Bốn Trụ Cột Của Giáo Dục – in the Learning the Treasure within a report and a discourse on Education by UNESCO published in 1982.

Then I realized that the note I wrote down 15 years ago of my head teacher’s words was exactly UNESCO Four Pillars of Education, which I sincerely invite you all to go over attentively, either the English or the Vietnamese version.

I was in shock, mixed with excitement by that aha moment while huge questions were pouring into my mind.

Why was that – a high school teacher like my head teacher knew everything about these beautiful principles and philosophy of Education more than 15 years ago but the Vietnam national education system seems to never have gone into its right path or done the right thing as it should have done during my generation?

Why have Vietnam education policies been continuously popping up left and right, switching day and night, challenging the nerves of students, parents, teachers and the public?

What have been the problems with the education system throughout Vietnam after the fall of Saigon in 1975?

For those questions, I invite you, both young and old, to think and find the answers.

2. On knowledge economy or intellectual economy

On the second note, recently I had a trip to an academic conference in Ontario, Canada. I landed at Toronto airport, and the airport-transit driver drove me from the airport to my hotel. It took almost 1 hour and a half. I was in terrible jetlag as usual after an intercontinental flight but I still clearly remembered the most talkative driver I’ve ever met.

The taxi driver introduced himself – Eitan originally from Israel. Knowing that I was from Vietnam, Eitan said he used to work for the Israeli military. He worked in the aircraft back in the time when the US army and allies airlifted refugees after the fall of Saigon in 1975.

Among tons of Eitan’s stories, I remembered that he talked about TPP, its the pros and cons, and he talked about trade agreements and jobs, and climate change and so on. He also talked about his own experience on how a bunch of Asian migrants coming into North America with their doctorate degree in hands on engineering, medicine and all kinds of profession, then they ended up working as taxi driver like him….I mostly nodded along or gave few words adding to his stories.

Though I was deadly tired and Eitan’s stories kept slipping through my ears, the exhaustion did not take away the impression Eitan left in me. I was quite impressed hearing those stories from a taxi driver. Those were not simply gibberish to entertain his customers. It does need certain level of knowledge and skills to obtain and interpret those kinds of information.

A week after the conference, on the way back from my hotel to Toronto airport, many of the same Eitan stories came out from another taxi driver – environmental protection, the Iraq war, taxes, jobs…. This driver was not a migrant. He was a white Canadian, born and raised in Canada. I couldn’t remember his name.

The stories from the two taxi drivers echoed someone’s mentioning somewhere: “When you visit a new country or a new city, talk to the taxi drivers, they know everything.”

Though this trip to Canada was not my first North America visit, the stories heard from the taxi drivers had me ask myself:

Is this what they define knowledge-based economy in North America (USA and Canada), where a taxi driver can talk globally? Is that how they run their economies? What made a country’s economy an intellectual economy or knowledge economy?

Again, I leave the question to you all, young and old alike, and invite you to find the answers with me.

A little piece about me, I was born and raised in Hanoi. I belong to the so-called 8x generation who were born in the middle 1980s. I realized that being the 8x generation gave me an advantage, I have quite a diverse pool of friends from a large range of ages from 1990s to late 1970s or earlier. For this middle generation, I joke around about myself, I am a “middle actor – trung gian” (trung thì ít mà gian thì nhiều which means more suspicious than honest) 😀 – I am just kidding – Those were the words from my best Algebra teacher in high school as a tip for his students to remember how to borrow the intermediate values when solving algebraic problems .

The little joke is just for you young and old folks to know that I love to befriend you, to have conversations with friends from different generations and to listen to one another. It is my true humility to listen to your sharing. I was a happy kid and a joyful student all the time during my studying in Vietnam. Nonetheless, deep down inside, I was not satisfied with the whole system of education and many things else in Vietnam which I couldn’t define what that really was back then. To cut short, I sincerely invite you all to contemplate and find the answers and actions for those questions among tons of questions that we need to address for the development of Vietnam.