This is the moment that I have feared for 15 years, since Project RENEW was launched in 2001.

Yesterday Ngo Thien Khiet was killed by a cluster munition at a field site in Quang Tri Province, near the former DMZ.  The 45-year-old deminer, a senior technician with eight years’ experience, was directing his team members in an area where several cluster bombs had been found and marked for destruction.

RENEW’s explosive ordnance disposal specialists and clearance technicians are highly trained, and professional.  Safety is their top priority.  Their efforts have resulted in the destruction of more than 30,000 bombs and other munitions over the years, without a single accident, injury, or death.

The RENEW staff, colleagues from Norwegian People’s Aid (NPA) and other NGOs, provincial officials and of course friends and family of Khiet are grieving this loss of a dear friend and colleague, a patriot who sacrificed his life in peacetime to dismantle the instruments of death left behind in wartime. 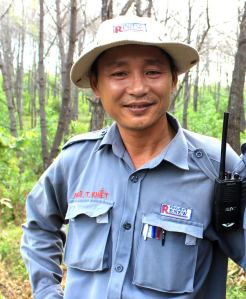 A cluster bomb explosion in Quang Tri Province has killed one deminer and injured another, both technical staff managed by Project RENEW and Norwegian People’s Aid (NPA).  The accident occurred on Wednesday, 18 May, in Co Luy Village of Hai Ba Commune, Hai Lang District.