END_OF_DOCUMENT_TOKEN_TO_BE_REPLACED

The coronavirus pandemic interrupted efforts to control malaria, resulting in 63,000 additional deaths and 13 million more infections globally over two years, according to a report from the World Health Organization published Thursday.

Cases of the parasitic disease went up in 2020 and continued to climb in 2021, though at a slower pace, the U.N. health agency said Thursday. About 95% of the world’s 247 million malaria infections and 619,000 deaths last year were in Africa.

“We were off track before the pandemic and the pandemic has now made things worse,” said Abdisalan Noor, a senior official in WHO’s malaria department.

Alister Craig, dean of biological sciences at the Liverpool School of Tropical Medicine, noted that progress in reducing malaria deaths had stalled even before COVID-19.

“It is almost as if we have reached a limit of effectiveness for the tools we have now,” said Lister, who was not linked to the WHO report.

Noor said he expected the wider rollout of the world’s first authorized malaria vaccine next year to have a “considerable impact” on reducing the number of severe illnesses and deaths if enough children get immunized, adding that more than 20 countries have applied to vaccines alliance Gavi for help in securing the shot. Still, the vaccine is only about 30% effective and requires four doses.

Bed nets can protect people from being bitten by the mosquitoes that spread malaria. The WHO report found that about three-quarters of nets provided by donors have been distributed, but there are major gaps in some of the worst-hit countries. Authorities in Nigeria, for example, gave out just over half their nets, while Congo distributed about 42% of theirs.

Officials also raised concerns about a new invasive mosquito species that thrives in cities, is resistant to many pesticides and which could undo years of progress against malaria. The invasive species has not yet significantly contributed to the continent’s overall malaria burden, but the insects are likely responsible for a recent spike in parts of the horn of Africa, Noor said.

David Schellenberg, a professor at the London School of Hygiene and Tropical Medicine, said there were promising new tools and strategies to tackle malaria, but that “the elephant in the room is the level of funding.” WHO estimated the total investment into malaria — about $3.5 billion — was less than half of what was needed to dramatically reduce its impact.

The Associated Press Health and Science Department receives support from the Howard Hughes Medical Institute’s Science and Educational Media Group. The AP is solely responsible for all content.

Since August, 199 people have died of acute kidney injury, prompting an inquiry and ban on some medicines

A dozen families, whose relatives died or fell ill after consuming cough syrup medicines, have sued the Indonesian government and companies accused of supplying the products.

At least 199 people, many of them young children, have died as a result of acute kidney injury since August, prompting the government to ban some syrup medicines and launch an investigation.

Agence France-Presse, which reported news of the lawsuit, said the class action been launched against the ministry of health, the country’s food and drug agency and seven companies implicated in selling dangerous syrups.

He told AFP that the authorities had failed to prevent the sale of harmful medicines. “No one has claimed responsibility. They are very disappointed with the current situation,” Puryadi said.

Indonesia’s food and drug agency has suspended the licences of at least three manufacturers that were producing syrup medicines while police investigate.

According to a World Health Organization product alert issued in November, eight products in Indonesia were found by the national regulatory authority to contain dangerous levels of ethylene glycol and/or diethylene glycol – colourless liquids that are typically used in antifreeze.

According to the WHO, the consumption of such compounds, especially by children, may result in serious injury or death. Toxic effects can include “abdominal pain, vomiting, diarrhoea, inability to pass urine, headache, altered mental state, and acute kidney injury which may lead to death”, the WHO has warned.

In October, the World Health Organization issued an alert over four Indian-made cough and cold syrups that it said could be linked to acute kidney injuries and the deaths of 70 children in the Gambia.

END_OF_DOCUMENT_TOKEN_TO_BE_REPLACED

Climate change is creating many pathways for zoonotic diseases to reach people. Four cases show how the climate crisis is altering disease threats and how the world can respond.

The world is already witnessing the consequences of human-caused climate change, including hotter temperatures, rising sea levels, and more frequent and severe storms. What’s harder to see are climate change’s effects on the spread of disease: on the mosquito that carries a virus, or the pathogenic bacteria on a piece of fruit.

END_OF_DOCUMENT_TOKEN_TO_BE_REPLACED 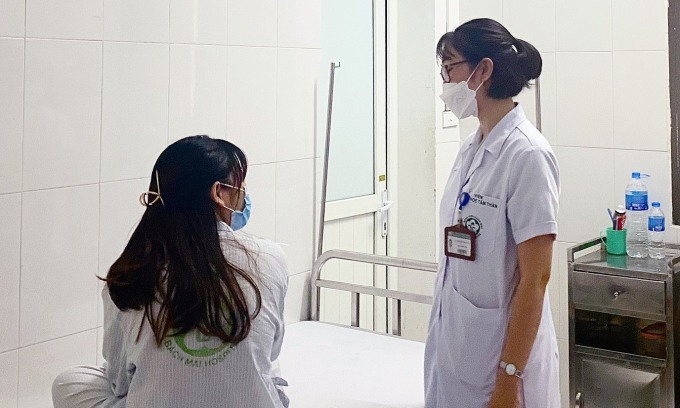 A patient with depression is being treated at the National Institute of Mental Health in Hanoi. Photo by VnExpress/Thuy An

At a Monday meeting to commemorate World Mental Health Day (Oct. 10), Thuan said around 14.9% of the Vietnamese population suffer mental illnesses. Most people in Vietnam associate mental illnesses with schizophrenia, while the condition actually only afflicts 0.47% of the population, he added.

END_OF_DOCUMENT_TOKEN_TO_BE_REPLACED

For Kasun Chameera, who lives in Sri Lanka’s densely populated capital Colombo, dengue fever is a disease which has afflicted many loved ones, including his brother.

“We fear death when we hear about dengue,” Chameera said. “It’s present almost everywhere in my district, and spreads faster in the city than in the villages.”

His brother “suffered a lot from it,” Chameera said. “For at least one to two months, he would be tired walking just 10 steps. We were very scared.”

Also known as breakbone fever because of the severe pain it can cause, the disease is a growing threat across Asia, where 70% of the world’s dengue cases occur. The virus is transmitted to humans through the bites of the female aedes aegypti and aedes albopictus mosquitoes, which thrive in both tropical and subtropical urban areas.

Worldwide, it is estimated to infect about 390 million people every year, with more than half of the global population now at risk.

Recent weeks have seen soaring cases in Singapore, Malaysia and Vietnam, despite the peak season usually lasting from June to October. Reported cases in Singapore topped the 10,000 mark in the first five months of this year, already exceeding the 5,258 cases reported in all of 2021.

In Japan, 461 cases were reported in 2019 — mainly found in travelers from Asian countries. But with the borders effectively closed during the pandemic, the number of cases dropped to 43 and eight in 2020 and 2021, respectively.