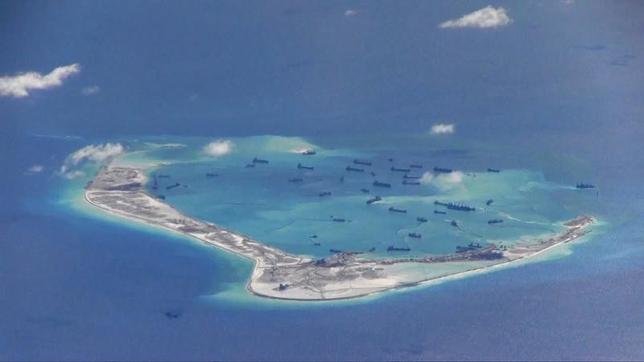 Chinese dredging vessels are purportedly seen in the waters around Mischief Reef in the disputed Spratly Islands in this still image from video taken by a P-8A Poseidon surveillance aircraft provided by the United States Navy May 21, 2015.
Reuters/U.S. Navy/Handout via Reuters/Files

China said on Friday it was “extremely concerned” about a suggestion from a top U.S. commander that U.S. ships and aircraft should challenge China’s claims in the South China Sea by patrolling close to artificial islands it has built.

China’s increasingly assertive action to back up its sovereignty claims in the South China Sea have included land reclamation and the construction of ports and air facilities on several reefs in the Spratly Islands.

The work has rattled China’s neighbors, in particular U.S. ally the Philippines, and raised concern in the United States.

China says it has irrefutable sovereignty over the Spratly Islands and no hostile intent.

Admiral Harry Harris, the commander of U.S. forces in the Pacific, told a Senate hearing on Thursday that China’s building of three airfields on small islands and their further militarization was of “great concern militarily” and posed a threat to all countries in the region.

Harris said the United States should exercise freedom of navigation and flight “in the South China Sea against those islands that are not islands”.

Chinese Foreign Ministry spokesman Hong Lei said China was “extremely concerned” about the comments and China opposed “any country challenging China’s sovereignty and security in the name of protecting freedom of navigation”.

“We demand that the relevant country speak and act cautiously, earnestly respect China’s sovereignty and security interests, and not take any risky or provocative acts,” Hong said at a daily news briefing.

U.S. concerns about China’s pursuit of territorial claims in the South China Sea will be high on President Barack Obama’s agenda in their talks next Friday.

China has overlapping claims with Vietnam, the Philippines, Malaysia, Taiwan and Brunei in the South China Sea, through which $5 trillion in ship-borne trade passes every year.

On Thursday, the head of the U.S. Senate’s military committee criticized the Obama administration for failing to challenge China’s island building in the South China Sea by sailing within 12 miles (19.2 km) of them, saying this amounted to de-facto recognition of Chinese claims.

On Tuesday, a U.S. expert said China was carrying out land reclamation in the South China Sea this month, more than four weeks after saying it had stopped such activity, citing recent satellite images.