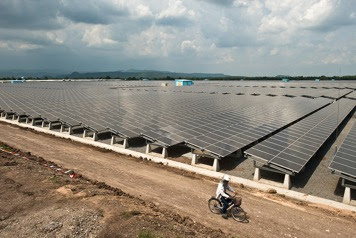 Thailand is moving ahead with a scheduled update to the national Power Development Plan. A slew of contradictory news reports indicate a lively internal debate over the how big of a pivot Thailand will make towards domestic renewable energy and away from power imports from neighboring Laos and Myanmar. The Power Development Plan (PDP), which is revised approximately every three years, should be released in September 2018. The release is timely as prices of alternative technologies like wind and solar power are at record lows and continuing to fall. Given the ongoing need for power sector expansion, Thailand and other countries in the Mekong region are well positioned to take advantage of these low prices if the right policies are set.

The new power development plan will also decide the fate of the Thai-backed Pak Beng dam, the third dam slated for the mainstream of the Mekong in Laos. In March 2018, the Electricity Generating Authority of Thailand (EGAT) temporarily suspended the power purchase agreement for the dam until the PDP revision is finalized. If the Pak Beng dam were cancelled, Laos’s dreams to become the “Battery of Southeast Asia” through the export of hydropower to its neighborhood could be shattered. Such a result would bode extremely well for the Mekong’s fragile ecosystem and the downstream millions who rely on the river’s natural provisions. But Laos will be left in the lurch with no alternative development model, and this places Laos in vulnerable position considering China’s Belt and Road Initiative looms large in the small landlocked nation.

It is too early to tell what the final proposed power mix will look like, but Thailand’s decision should set the tenor for the region more broadly. Thailand’s former PDP supported cross-border investments and power imports to ensure a diverse electricity supply and meet energy reserve requirements. Some analysis suggests the government could pivot away from an MOU to purchase 10,000 MW of electricity from Laos, most of which would have been supplied by hydropower on the mainstream of the Mekong River.

Public statements on the outcome of the PDP give mixed messages. On one hand, since late 2017 analysts note that the PDP 2018 will integrate more domestic renewable energy generation into Thailand’s energy mix. As of 2017, Thailand’s installed solar capacity more than doubled since 2014 to more than 3,300 MW. This is more than halfway towards meeting the 2036 target of 6,000 MW. A recent study by the International Renewable Energy Agency indicates that Thailand could feasibly pursue an installed capacity of 17,000 MW by 2036. A mid-June statement indicates that the Ministry of Energy has officially raised the renewable energy target from 20% in the last PDP 2015 to 30% for the upcoming PDP 2018. The business case for a shift towards renewable energy appears to have convinced Thai investors who plan to invest $3.9 billion in alternative renewable technologies in 2018.

On the other hand, entrenched Thai institutions will resist the widespread adoption of renewable energy. Officials inside the Electricity Generating Authority of Thailand (EGAT) understandably have concerns about how the proliferation of rooftop solar will disrupt its traditional business model. EGAT also has little technical guidance on how to integrate a higher-than-anticipated percentage of variable renewable energy into the power system. Minister of Energy Siri Jirapongpan indicates that EGAT has no plans to purchase any new renewable energy from small power producers from 2018– 2023, and Thai government stakeholders continue to appeal for controversial thermal coal facilities. In numerous public statements Prime Minister Prayuth has pushed the public to consider the benefits of coal plants, and in April Minister Siri emphasized that the government aimed to expand domestic coal generation to guarantee energy security.

In early June a lightning strike on the transmission line between the Hongsa coal power plant in Laos led to an hour-long blackout in northern Thailand and around Bangkok. Shortly after the incident, Minister Siri announced the intent to further increase the reserve capacity. This appears counterintuitive, since early impetus for the PDP revision was to reduce overly high reserve capacity. Maintaining this power reserve is costly for Thai consumers and has led to Thailand backing unnecessary generation projects abroad such as the Xayburi and Pak Beng dams. Official figures show that the national power reserve has surpassed 30% of peak demand since 2016, while some experts indicate it has reached 55% due to lower-than-projected power consumption in recent years. In either case, the total is more than double the international standard of a 15% reserve margin. Did the energy minister spin the lightning strike in Laos to appeal for a beefed-up reserve margin? Or is this a signal toward a waning interest in power purchased from abroad? Could both intentions be true?

The Power Development Plan is still undergoing internal negotiations. Events like the June blackout could reinvigorate the same arguments over energy security that have led to a high reserve margin, over-investment abroad, and ultimately a high cost of electricity for consumers. An ambitious shift toward renewables and reduced demand projection may be stymied by internal momentum supporting a business as usual pathway which keeps Thai companies building hydropower and coal plants in neighboring Laos and Myanmar. However, if Thailand really does make a shift toward domestically produced renewable energy and outbound investment in hydropower and polluting coal slows down, then the energy landscape for the Lower Mekong will look significantly different. Fewer dams, especially fewer mainstream dams, could deliver a more sustainable future for the Mekong’s fragile ecosystem.

If the market for hydropower in Laos falls out of Thailand’s interest, Laos clearly needs to consider new options for economic development. Will China come in as a white knight to keep Laos’s mainstream damming ambitions alive, despite a lack of market and commercial viability? The recent announcement of a fourth mainstream dam in Laos at Pak Lay, which many believe will be built by China’s Datang, suggests this could be true, at least in the short term. Without Thailand as Laos’s major offtaker, Vietnam has a chance to step in and negotiate conditional power imports wherein Laos places dams in less damaging parts of the river system. This would both help meet Vietnam’s unmet energy demand and help transitions the Lao power sector towards a more diversified mix including scale solar and wind power. This approach could put Laos on track to being a better battery of Southeast Asia. Stay tuned for more developments of Thailand’s PDP update. The future of the Mekong river hangs in the balance.