Small but inevitable rises in sea level will double the frequency of severe coastal flooding in most of the world with dire consequences for major cities that sit on coastlines, according to scientists.

The research takes in to account the large waves and storm surges that can tip gradually rising sea levels over the edge of coastal defences. Lower latitudes will be first affected, in a great swath through the tropics from Africa to South America and throughout south-east Asia, with Europe’s Atlantic coast and the west coast of the US not far behind.

The most vulnerable places, including large cities in Brazil and Ivory Coast, and small Pacific islands, are expected to experience the doubling within a decade.

“It is pretty much inevitable that we are going to see increased frequency of extreme water levels – there is no way around this,” said Sean Vitousek, at the University of Illinois at Chicago, who led the research. 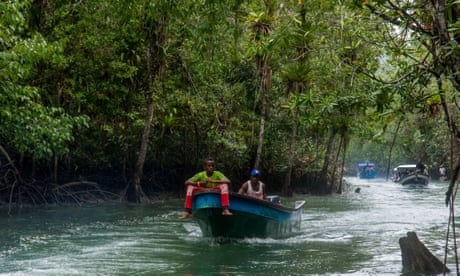 Global development – The Guardian How do you solve half a century of bloodshed in Colombia? – podcast

After the civil war that claimed 250,000 lives ended with last year’s accord, Lucy Lamble investigates how Colombia’s communities plan to build lasting peace

Climate change is causing sea levels to rise at about 4mm per year, as ice caps melt and the oceans warm and expand. This will continue for many years due to the carbon dioxide emitted into the atmosphere.

The steady rise in sea level is unlikely to cause flooding directly as coastline developments are designed to withstand the larger ebb and flow of the tides. But the rising level gives a higher starting point for the storm surges and big waves that can overwhelm coastal defences.

The research, published in the Scientific Reports journal, is the first to analyse these factors, particularly waves, on a global scale. It found that the most at-risk areas were in the low latitudes, where tidal ranges are smaller meaning sea level rise is proportionally more significant.

In those locations, just 2.5cm of sea level rise leads to extreme water levels being seen twice as often, while a 5-10cm increase means coastal floods are twice as likely across all the tropics. A rise of 20cm leaves almost every coast with twice the risk.

Projections of sea level rise vary, with the UN’s Intergovernmental Panel on Climate Change estimating in 2013 an increase between 30cm and 100cm by 2100. But more recent research has suggested the great ice caps are more vulnerable than expected in a warming world and that oceans levels could rise more rapidly to reach 200-300cm by the end of the century.

The rise of 5-10cm, likely to occur within a couple of decades, would mean major cities including San Francisco in the US, Mumbai in India, Ho Chi Minh in Vietnam and Abidjan in Ivory Coast facing a doubled risk of coastal floods. “The maps of increased flooding potential suggest a dire future,” write the scientists.

“This study shows how even small changes in mean sea level can significantly increase the frequencies with which critical thresholds are exceeded,” said Thomas Wahl, professor of coastal risks at the University of Central Florida, who was not part of the research team.

“For coastal communities that means they need to adapt in order to prevent flood events from happening much more often,” Wahl said. “In the end, however, it still needs more localised studies in order for coastal managers to make important decisions on the ground.”

Previous research estimated the damages from coastal flooding could soar to $1tn a year by 2050.

Vitousek said: “We are going to have to [cut carbon dioxide emissions] and engineer the coastlines to stop a lot of these events from happening. We want Greenland and Antarctica to remain as ice for as long as possible.

“One metre of sea level rise is going to be a game-changer for the coastal zone. The next time you are at the beach or down by the water, think about what that area would be like in some of these sea level rise scenarios, half a metre or metre. You’ll see it’s a pretty scary proposition.”