On weekdays, the Trâng family starts thinking about lunch at 6am.

More specifically, that’s when they begin preparing gà chiên muôi ot or “fried chicken salt chili,” the popular dish that serves as the cornerstone of the lucrative lunch service they’ve been operating in the 3rd district of Ho Chi Minh City for three decades.

The family prepares more than 15 distinct dishes daily (plus rice, water-spinach soup, and iced green tea) out of the stall-sized kitchen in their modest three-room apartment. At about 11 am, they lower the goods to the ground floor using a makeshift pulley system, walk less than 100 metres around the corner, and set up shop on a shaded patch of sidewalk next to an electrical transformer. Over the next two hours, a throng of roughly 150 diners – from office workers in suits to motorbike taxi drivers in flip flops – come for lunch, paying 30,000 VND ($1.40) per plate. 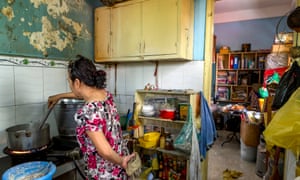 Le Thi Lang, 56, prepares a sauce for Ga Chien Muoi Ot on the stove. She prepares at least 15 dishes for each lunch service. Photograph: Vinh Dao

The Trâng family is one of countless informal street food vendors in Vietnam. In Ho Chi Minh City, 11% of the workforce are street vendors, part of the 51% of the total workforce in the city employed in informal, non-agricultural work, according to government-collected data. 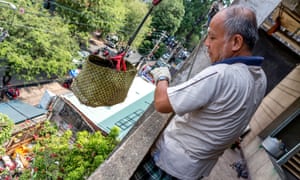 A pulley system that was designed and built by Trang Ding Bo is used to transfer the dishes to his daughter below. Photograph: Vinh Dao

However, despite its ubiquity street vending in Vietnam exists in a grey area. While registration with the government is dependent on surpassing a certain threshold of earnings, a2014 report on Vietnam’s informal economy by the UN’s International Labour Office estimates that up to 78% of these home-run business operate illegally.

In spite of this legal ambiguity, Vietnamese street food has not just become part of the cultural fabric of Vietnam, but also a cuisine that’s imitated, fetishised, and replicated in cities all over the western world. In Ho Chi Minh City, there’s a cottage tourism industry around helping westerners find the best street food as well as YouTube videos and English language blogs providing directions to popular but hard-to-find vendors.

However, amidst Ho Chi Minh City’s increasing luxury stores and air-conditioned shopping malls, it’s easy to overlook the fact that this celebrated and ad-hoc industry is one born squarely out of a lack of economic opportunity and a dearth of jobs in the formal sector. 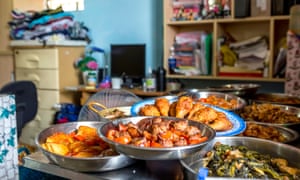 According to Lisa Barthelmes, a PhD candidate studying Vietnam’s informal economy at Germany’s Max Planck Institute for Social Anthropology, Vietnam’s Doi Moieconomic liberalisation reforms of the mid 1980s aimed to create a modern country, and thus street vending in the urban realm was seen by the government as “a visible manifestation of backwardness”. But 30 years later, as any pedestrian on Saigon’s teeming sidewalks can see, the industry is far from in decline. Although unregistered street vending is still not sanctioned by the government, Barthelmes explains why it has flourished in spite of economic reform.

“After Doi Moi, rural Vietnamese suddenly needed cash because formerly subsidised state policies like education and healthcare were abandoned, so they couldn’t live off their farms anymore,” Barthelmes said. “Simultaneously, movement and residency were much less restricted, so all of a sudden the government couldn’t control the rural-urban migration that usually happens when an economy is liberalised.” 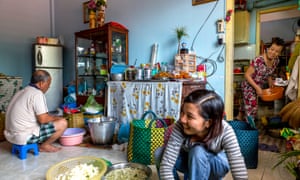 The economic challenges of making a living in the informal economy are not uniform among all street vendors. Those familiar with Ho Chi Minh City’s street food economy say it can be broken down unofficially into a three-tiered system. The bottom tier are hyper-mobile street vendors who serve a single dish, carry their wares on their backs as they move around the city, and are often rural-to-urban migrants scraping by on very low earnings.

The second tier don’t have a fixed storefront, but they tend to operate in the same spot every day and serve a variety of dishes. The top tier are fixed vendors, usually people who have lived in the city for a long time. They pay rent for or own a brick and mortar storefront, and often live in the same space that they sell. 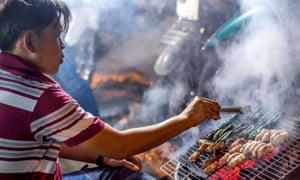 For the Trâng family, this second tier has provided a quality of life that’s far above the national average. After expenses, they take in more than $100 per day, which on a yearly basis puts them far above Vietnam’s average per capita GDP, which isless than $2,000 per year. In the absence of formal financial services like loans, they say this level of earnings is enough to provide the capital to hire a new employee and open an additional noodle stand in the near future. Their 31-year-old daughter Thao, who began helping out at the family business when she was eight, expresses pride in what she does.

“Of course we are happy that people know about our food,” Thao said. “I studied business administration and thought about working in hospitality, but I like the family aspect of the business and the interaction with people. I couldn’t imagine working in an office.”

Le, 39, is a street vendor who operates on the lowest and most difficult tier. Her very popular soup, bún dò (red noodles), is a combination of banana leaf wrapped-sausage, cubes of congealed pork blood, morning glory greens, shrimp paste, snails, and tofu, for which she charges about 75 cents per bowl. The informal and improvised nature of her setup seems to enhance its popularity; at rush hour on a Thursday evening in April, her guests include everyone from a businessman in a tailored suit to a Pizza Hut employee stopping by after her shift just in time to get the dregs of the pot. Patrons squat and slurp on tiny plastic stools behind a bus stop. 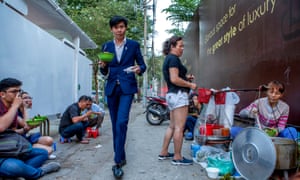 In a sense, Le’s is a high-risk, high-reward endeavour. Thanks to serving a somewhat unique regional dish in a highly-trafficked area near a luxury construction project, she sells roughly 200 bowls per day, pulling in a healthy net profit of roughly 1.6 million VND, approximately $75. 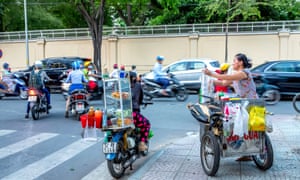 However, she says the physical demands of constant food preparation and transporting her setup are punishing. Moreover, she is constantly afraid of being chased away by police, which is part of the reason she did not provide her full name when interviewed. When that happens, Le says it significantly hurts her bottom line.

“I can’t sell enough bowls of soup to break even because I lose too much time.”

Le’s situation is in contrast to Hoa Huynh, a fixed vendor who lives with his family in his shophouse on Cô Giang, a hub of street food in Saigon’s 1st district. His earnings from selling bańh trańh cuôń (rice paper rolls with fat-wrapped beef, rice noodles, vegetables and fresh herbs) are much lower than Le’s, profiting less than $25 per day. Hoa says that because he lacks the literal kerb appeal of vendors such as Le, he has to offer freebies like hand wipes, delivery and free Coca Colas to differentiate himself and lure customers off the street. 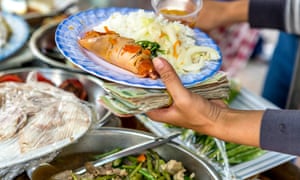 However, with his stationary enterprise, he’s able to operate seven days per week, takes on far less risk, and doesn’t have to pay for transportation or lost earnings due to an abandoned post mid-service. Somewhat perversely, locals say a fixed storefront vendor like Hoa is considered at a higher socioeconomic level than a mobile vendor like Le, despite the fact that she earns more profit.

The Vietnamese government seems aware that this multi-tiered industry is at least in part responsible for keeping Ho Chi Minh City’s unemployment rate quite low at 3.29%. The government’s 2014 report on the labour force says the this stabilised unemployment rate despite a “low level of development of the economy” could be owed to the harsh reality that “workers must stay employed, even in the informal sector where earnings are low and unstable, in order to support themselves and their family.” Meanwhile, interviews with the ministry of planning and investment, which is responsible for regulation, reveal that the ministry “is aware of this situation but does not seem to consider that addressing this issue should be a priority”, notes the ILO report.

Although earning potential, risks, and status vary widely across Saigon’s street food industry, the biggest indication of how vendors feel about their work comes from asking if they want their children to do the same. 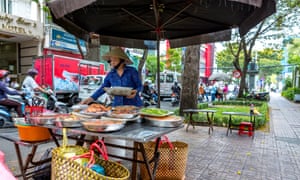 Le, who is illiterate and says she has never contemplated any other profession, knows she is unlikely to find a job in the formal economy. But when asked about her teenage son, who often comes to help her after his studies, she looks up from her near-empty soup cauldron and, for the first time in the evening, seems resolute.

“There is no future for my son if he keeps selling food this way.”