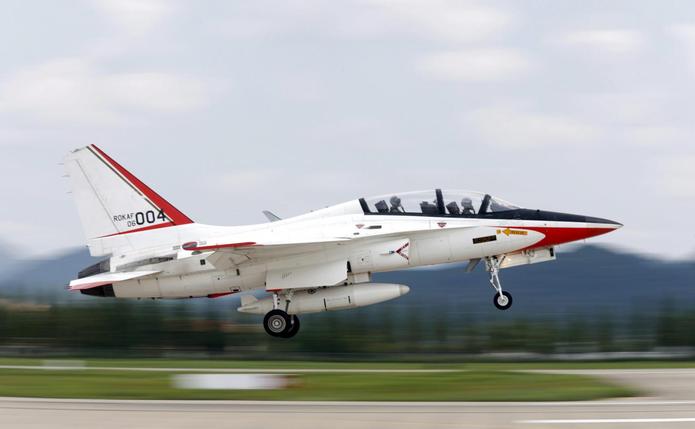 A T-50 advanced jet trainer takes off during training at the First Fighter Wing of the South Korean air force in Gwangju, south of Seoul, in this August 14, 2013 file photo.
Reuters/Lee Jae-Won/Files

Vietnam is in talks with European and U.S. contractors to buy fighter jets, maritime patrol planes and unarmed drones, sources said, as it looks to beef up its aerial defenses in the face of China’s growing assertiveness in disputed waters.

END_OF_DOCUMENT_TOKEN_TO_BE_REPLACED

Despite a slowdown in its economy and the continued reliance on coal, China is pumping billions of dollars into its renewable energy industry.

LONDON, 30 May, 2015 − China invested more than US$89 billion in renewable energy projects in the country in 2014 – a growth of 31% on the previous year, according to a detailed report on the country’s energy sector.

The soaring increase is revealed in a report by the US government’s Energy Information Administration (EIA). But it adds that fossil fuels − particularly coal − still look set to continue to dominate China’s power sector.

Coal is by far the most polluting fossil fuel, and China is the world’s leading emitter of climate-changing greenhouse gases.

Wind power production went up by nearly 40% in the 2012-13 period. Although there are still big gaps in the transmission infrastructure, the aim is to generate 200 gigawatts (GW) of electricity from wind by 2020.

“China is also aggressively investing in solar power and hopes to increase capacity from 15 GW at the end of 2013 to 100 GW by the end of 2020,” says the EIA. Substantial government subsidies have helped to fuel growth in the solar sector. END_OF_DOCUMENT_TOKEN_TO_BE_REPLACED

Although Vietnam has very comprehensive frameworks for its climate and energy policy, there are justified doubts about the practicability of the strategy and its compatibility with economic development. This is reflected in the current climate and energy policy. Right now, it is impossible to consistently pursue the goal of balancing an effective climate policy with a low-carbon economy. This is because the goal is at odds with current developments in Vietnam’s energy sector. Germany Trade & Invest says that, in contrast to Germany’s energy policy, Vietnam has made the construction of coal-fired power plants a top priority, and this despite the fact that the country has considerable potential when it comes to renewable energies
(hydropower, biomass, nuclear energy).

CLIMATE OR THE ECONOMY? VIETNAM’S ATTEMPTS TO BALANCE GROWTH AND THE ENVIRONMENT

Against the intuition of standard economic theory on collective action problems a number of developing countries engage in unilateral climate change mitigation policy. Ostrom (2010) gives several potential reasons why conventional theory fails to explain this observation, as for example the existence of multiple benefits. By analyzing the case of Vietnam, this study intends to give insights on the potential motivation for climate policy in a developing country. By means of qualitative interviews with Vietnamese policy makers and other stakeholders we examine the determinants that have shaped climate related policies recently launched in Vietnam, focusing on renewable energy policy and fossil fuel pricing policies. We find that emission reductions are not a main objective of these policies. Distinguishing between domestic and external factors, we argue that multiple policy objectives related to multiple benefits stemming from climate policy played important roles for national policy making as well as Vietnam’s international climate policy. Along the lines of Kingdon’s (1995) ‘multiple streams framework’ our analysis suggests that the interplay of those external and internal factors has opened a ‘window of opportunity’ enabling a policy change from a climate policy focused on adaptation to one in which increased emphasis is put on mitigation

END_OF_DOCUMENT_TOKEN_TO_BE_REPLACED

EAF – The South China Sea dispute has become the new normal in ASEAN meetings. The dispute, with its overlapping claims on various land features in the South China Sea, has started to figure as the most important territorial disputes in Asia, one that risks becoming a major power confrontation in the region. With this in mind, ASEAN must take a collective stand on the South China Sea.

END_OF_DOCUMENT_TOKEN_TO_BE_REPLACED

Washington (CNN) Four million current and former federal employees may have had their personal information hacked, the Office of Personnel Management said on Thursday.

The agency, which is conducts background checks, warned it was urging potential victims to monitor their financial statements and obtain new credit reports.

U.S. officials believe this could be the biggest breach ever of the government’s computer networks.

The breach is beyond the Office of Personnel Management and Department of Interior, with nearly every federal government agency hit by the hackers, government officials said. END_OF_DOCUMENT_TOKEN_TO_BE_REPLACED