The Indian government says sex-selective abortions and a neglect of girls have resulted in millions of statistically “missing” women. Despite the numbers, some gender equality indicators have improved for women.

An Indian government report presented to parliament on Monday has found that about 63 million women are statistically “missing” from India’s population, due to a preference for male children.

The survey, presented with a pink cover, included a chapter on women’s issues for the first time – with the slogan #MeToo in recognition of the global campaign against sexual harassment.

A sex ratio of 943 females per 1,000 males has led to the identification of some 63 million “missing” women, the annual economic survey found.

The survey reported the reason for the figures was largely because of sex-selective abortions, better nutrition and medical care for boys and that “families where a son is born are more likely to stop having children than families where a girl is born.”

The survey analysed birth rates and the gender of last-born children. It estimated that more than 21 million girls were not wanted by their families.

While families openly celebrate the birth of a son, the birth of a daughter is not always greeted in the same manner. Sons can inherit property but parents have to pay dowries when their daughters marry.

Sex-selection abortions are banned in India but they still take place and parents choose to keep having children until they have sons.

Not all bad news

The report found India’s northeast performed best in terms of women’s development. The region which includes ethnic communities closer to China and Myanmar represented a “model for the rest of the country.”

“In some sense, once born, the lives of women are improving, but society still appears to want fewer of them born,” the survey said.

Read more: Why implementing child bride verdict is a challenge in India 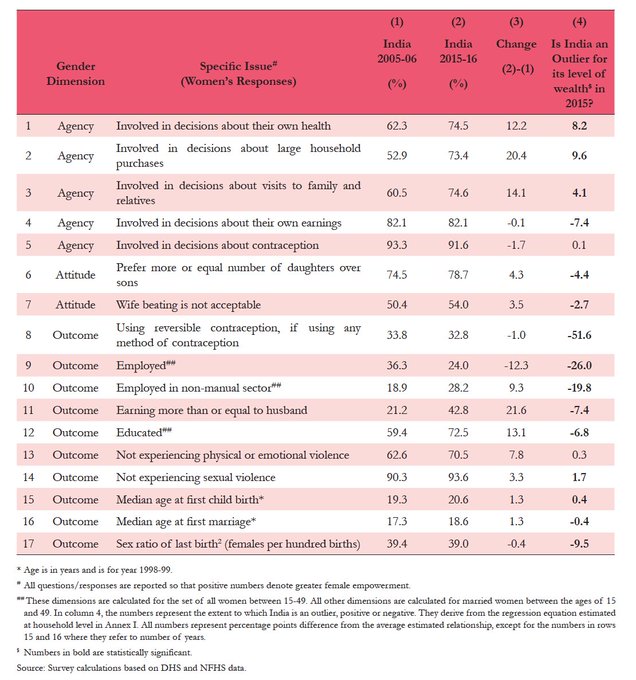 Increasing wealth has not meant an end to a preference for male children among families. Some comparatively wealthy areas, including New Delhi, have fared worse over the years.

“India must confront the societal preference, even meta-preference for a son, which appears innoculated to development,” the report said.

Nearly two-thirds of Indian women who do reach higher education and qualify with college degrees are without jobs. Female labour force participation is among the lowest in the world, according to World Bank data.

In January 2015 the Indian government launched “Save the Daughter, Educate the Daughter,” a campaign aimed at improving gender inequality by creating awareness and changing social norms around daughters.