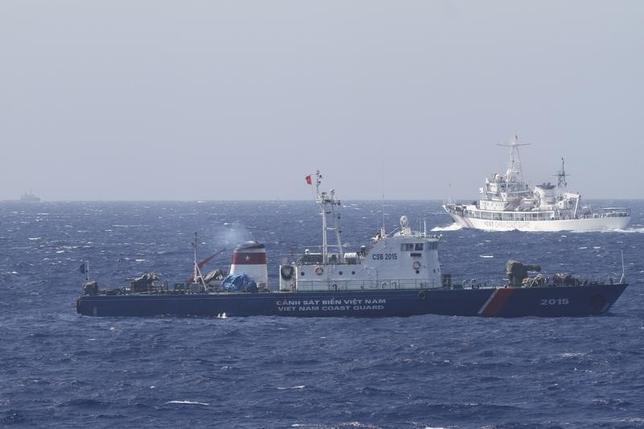 A ship (top) of Chinese Coast Guard is seen near a ship of Vietnam Marine Guard in the South China Sea, about 210 km (130 miles) off shore of Vietnam in this May 14, 2014 file photo.
Reuters/Nguyen Minh


Australia expressed alarm on Wednesday at escalating strategic rivalry in the South China Sea, saying it puts Asia at the risk of a military blunder with potentially serious consequences.

China’s recent assertiveness in the South China Sea has increased military and diplomatic tensions between it and rival claimants, including Vietnam, the Philippines, Brunei, Malaysia and Taiwan.

Defence Minister Kevin Andrews refrained from taking sides, but his comments made clear that Australia’s greatest concerns arose from Chinese military construction on scraps of land that are internationally contested.

“We don’t believe that turning a reef into a military airport is enhancing the peace and security of that region,” Andrews said after a speech to a think-tank during a visit to India.

“The greatest danger in the region is a miscalculation.”

China has reclaimed 17 times more land in the potentially energy-rich region in 20 months than the other claimants combined over the past 40 years, the Pentagon said last month.

Australia, a close U.S. ally, wants to strengthen its relationship with India. The two countries will stage their first ever naval maneuvers in the Bay of Bengal this month.

At the same time China, the world’s second largest economy, is Australia’s most important trading partner. It was in the interests of both to maintain that situation, Andrews said.

“We have not taken a stance on the various claims to rocks and reefs and outcrops and artificial islands in the South China Sea,” Andrews said at the Institute for Defence Studies and Analyses in New Delhi.

“But what we’ve said is that these matters should be solved in a peaceful way,” Andrews added, calling for a rules-based system of resolving disputes to be agreed by the Association of Southeast Asian Nations (ASEAN).

Andrews said Australia’s submarine deterrent – a major tender for a new order of long-range vessels is now in its final stages – was vital to national security.

By 2030, Australia expects the Indo-Pacific area to account for 21 of the world’s 25 top sea and air trade routes, two-thirds of oil shipments and a third of bulk cargo movements.

“We will maintain our right in the future to exercise the international right of passage – both on the sea and in the sky in the South China Sea,” he said.

“We want to be a friend and continue to be a major trading partner with China, as with other nations in the region, but we also believe that all nations should make clear their strategic intent.”