Akira Yoshino was about nine years old when his teacher gave him a book: Michael Faraday’s A chemical history of a candle. He’s never looked at a candle the same since. ‘There was a TV programme on the other day about candles and how they can only really be used on Earth. What happens when you’re in a zero gravity environment? The flame looks like it’s extinguished (it actually burns almost invisibly at a very slow rate). That fascinated me,’ he says with the broadest smile. 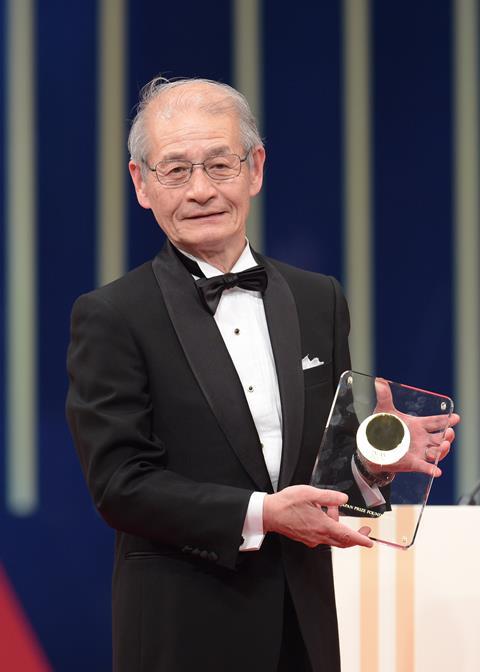 Decades after he first looked at candles in a new light, he’s received his country’s greatest scientific honour: the ¥50m (£345,000) Japan prize, together with a solid gold medal presented by the Emperor of Japan. ‘We had a frank discussion over dinner,’ he says. The event is the only time Emperor Akihito dines outside of his own quarters, yet alone with outsiders.

Born in 1948 in Osaka, Yoshino graduated from Kyoto University before taking a job at Asahi Chemical. There he began developing materials to build a better battery. There was growing demand for mobile devices, but most batteries at the time could only be discharged once. Those that were rechargeable, like the lead–acid or nickel–cadmium battery, were too big and too heavy, with limited capacity and shelf-life.

Many were experimenting with lithium as an anode. The problem was that the system was prone to short-circuit over multiple charge/discharge cycles, and was highly flammable. Yoshino shows two-decade-old videos of his team in a parking lot, dropping huge iron balls onto prototypes to see if they would explode. ‘You wouldn’t get away with doing this today!’, he laughs.

Yoshino was researching polyacetylene, which has the ability to conduct electricity despite being an organic substance. This was good as an anode, but he couldn’t find a suitable cathode to partner it with. Then, in 1983, a paper by the solid-state chemist John Goodenough caught his eye. It introduced him to the lithium cobalt oxide cathode – and a new friend. ‘His material provided everything I needed,’ says Yoshino. ‘It conducted well and brought the weight down by a third of the existing lithium–cadmium battery.’ Goodenough and Yoshino struck up an enduring friendship – the 70-year-old Japanese still visits the 95-year-old American in Texas every year. ‘Battery technology is electrochemistry, a complex and difficult interdisciplinary field,’ says Yoshino. ‘Achieving advances requires broad expertise – I consider the lithium-ion battery to be a fruit of such collective wisdom.’

Paired with a carbon-based anode, Yoshino found a working combination. But safety and performance remained an issue. This led him to perfect a thin polyethylene-based porous membrane to separate the anode and cathode: lithium ions move between the pores of the membrane during charge/discharge, but when the battery overheats the membrane melts, closing off the pores and stopping the battery from functioning.

Yoshino further developed an aluminium foil collector to draw electricity from the cathode, and optimising the solvent, dramatically improving performance in terms of high voltage and high capacity. Previously, rechargeable batteries used water as an electrolyte, but, getting more than 1.5 volts was practically impossible. Yoshino used an organic solvent instead, achieving over 4 volts.

That was in 1991, but there was no overnight success. For a while, video camcorder sales barely sustained demand, until, finally, the IT revolution and with it the lithium-ion battery’s moment. Today, smartphones fuel demand. Yoshino sees a future in wearable tech, but also embedded body sensors (think pacemakers but wider). Lithium-ion technology and wireless charging can extend the life of these devices without having to undergo surgery.

The next ‘canvas’, as Yoshino puts it, will be cars, where the application of lithium-ion tech is already advancing at a rapid rate. Low emission, hybrid electric vehicles are already common, but it’s self-driving technology that really excites Yoshino. ‘What will change is the social value of the car, from simple transportation to a space where we get services,’ he says. Just as the phone evolved, automated cars will become a space to consume media, organise our day, check our finances, maybe even monitor our health. It’s also thought that retired lithium-ion batteries from cars could be recycled to store energy from sources like solar power.

These functions will need batteries that provide even more power with longer lifespans. ‘There’s only so far that even lithium-ion technology can go, and as society’s demands evolve the bigger breakthroughs in storage capacity, charging, safety and size will most likely come from finding new materials with new properties,’ he suggests. ‘In 2011, for example, we had a breakthrough with solid electrolytes, which are safer and more stable. This kind of discovery leads to more engagement in the field.’

The thing about batteries, he quips, is they are so common to us that they can seem unspectacular. ‘Let’s be honest, the battery industry isn’t a particularly flamboyant or sexy-sounding field … this kind of award gives some motivation to the young people in the field that they can be recognised for their work.’