An animation entitled Bình Ngô Đại Chiến (The Pacification of the Wu) by a team known as Đuốc Mồi has received 5 million views within a few months of release.

The youthful Đuốc Mồi team is running a project to make animation films about outstanding figures, battles and milestones in Vietnamese history. The films by the group have received millions of views on YouTube and are said to have inspired many to take an interest in history.

The 2D production is about the Lam Sơn Uprising in the 15th century. The film highlights the battle of Tốt Động – Chúc Động in 1426 between the Lam Sơn troops under the command of national hero Lê Lợi and the Ming Chinese invaders from the north.

After the battle, Đại Việt gained independence and Lê Lợi became king in 1428. 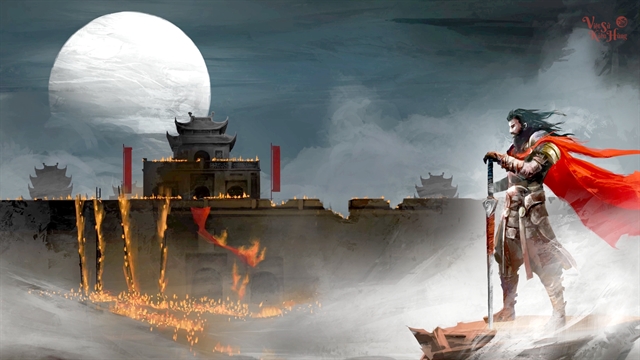 FAMOUS BATTLE: A scene from Bình Ngô Đại Chiến. The animation features a victory in the Lam Sơn Uprising under the command of Lê Lợi. After the battle, Đại Việt gained independence and Lê Lợi became king in 1428.

The film is one-hour in length and the largest scale film made by the Đuốc Mồi team. It was filmed in 15 months with a sum of VNĐ1.3 billion (US$57,000), which was crowdfunded by more than 1,600 backers.

The film had over 1,200 shoots and the script was adjusted 13 times. Shot in monochrome, but with occasional pops of colour, often red for flecks of blood, the hip animation is superbly drawn, acted and has a brilliant soundtrack. It is quite unlike any Vietnamese animation made before it.

“At the beginning, we planned to make a film with a length of 30 minutes. But the more we did the more interesting we found it, and there were more stories we wanted to tell the audience.”

The script editor Đỗ Minh Nhật put his shoulder to the wheel and had to adjust the script many times.

“The most difficult thing is not making the script better,” Nhật said. “The point is how to adjust it to best suit our production capability. We even had to change the script after the film was dubbed.”

Bình Ngô Đại Chiến went into production at the end of 2019. It was premiered at Cinestar Quốc Thanh in District 1, HCM City before launching on YouTube. It was the first animation to be trending in the Top 15 for YouTube Việt Nam.

The film also earned a 2020 WeChoice Awards for making a substantial contribution to the community.

Titled Việt Sử Kiêu Hùng (Việt Nam Epic History), the project is one of the most successful crowdfunding art projects in the country.

The project hopes to bring Vietnamese history closer to young people through animation, according to Trần Minh Tuấn, former leader of Đuốc Mồi.

“In the early stages of the project we had the principles that we respect history and we do not defend any character,” Tuấn said.

“We also choose historical periods and events that were not too controversial. We wanted to make the animations not for children but adults to inspire them to know more about history. In Việt Nam, animation is usually produced for children.”

Making historical animations came by accident to Tuấn, a graduate from HCM City University of Technology. He likes listening to audio-visual tellings of Vietnamese history. He and his few friends initially were just experimenting on a small scale.

But they were successful with a 10 second-demo clip, which inspired them to set up the Đuốc Mồi team.

The team has 10 permanent members and many temporary ones, both in Việt Nam and abroad. They are from different fields but share the same passion and love for history.

The team received support at the early stage not only from young people but also historians and artists.

With professional support from Đạt Phi Media and Epic Music VN, veteran artists such as Thành Lộc, Khánh Hoàng and Đức Thịnh also contributed to making the film a success.

Đạt Phi Media is a major partner with domestic and foreign studios such as Walt Disney, Sony Pictures and Warner Bros, whilst Epic Music VN is one of the first and largest production music libraries in Việt Nam.

Popular artist Thành Lộc agreed to join as he knew it was a non-profit project operated by young people. He was happy to join hands with the team to spread a love for Vietnamese history.

“It is great to join the project,” said Thành Lộc. “At the beginning, I was invited to dub Trần Hiệp’s character then Lý Lượng in Bình Ngô Đại Chiến.”

“I highly appreciate Đuốc Mồi team because of their work. While many people are ignoring history the team has made a great effort to produce historic animations despite financial and human resources difficulties.”

The fanpage of Việt Sử Kiêu Hùng has 150,000 followers and many interact with the page every day. The number of followers is not much but their comments encourage the team.

“Thanks team for a meaningful project. Your products evoke self-esteem and national pride. I want to thank you again,” Facebook user Tuan Anh Nguyen commented.

History Professor Nguyễn Quang Ngọc, deputy chairman of the Việt Nam Association of History Science, said it was popularising history for young people who had not paid it attention previously.