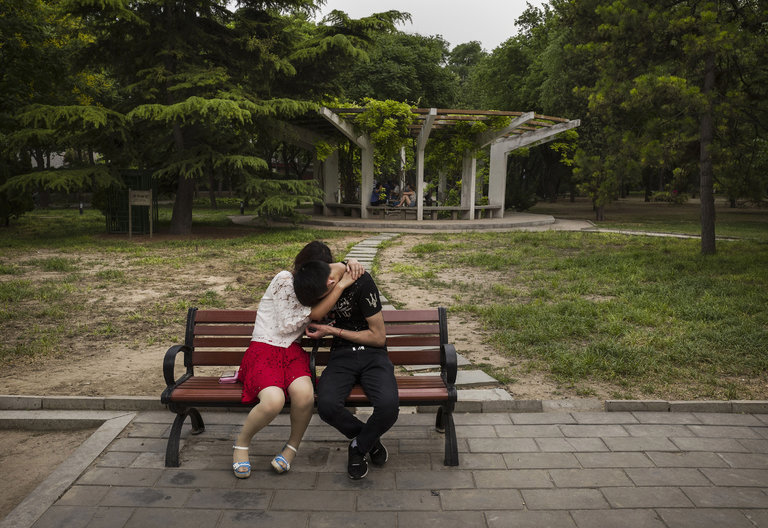 A couple in a park in Beijing, China, this month. Sex education is inconsistent in Chinese schools.CreditKevin Frayer/Getty Images

BEIJING — Young women who have sex before marriage are degenerates. A girl who gives her body for love will make the boy who “conquers” her love her less. Premarital sex has a “tremendous negative psychological and physical impact on girls.”

These are some of the assertions in a sex education textbook approved by a provincial education department in China that has led to an outcry on social media.

Outraged by the text, “Senior Middle School Student Scientific Sex Education,” a teacher posted photos from the book on Weibo, China’s equivalent of Twitter, on Friday, unleashing a firestorm of comments.

“I was so angry when I read the textbook,” Zhong Guangquan, the teacher from Guangdong Province in southern China whose post started the online debate, told a Chinese website, Sixth Tone. “The concepts are backward and all the negative comments are directed toward girls.”

“This makes me sick — as a man I can’t stand this,” one Weibo user said. “Since you want women not to have premarital sex, then please tell all boys to do the same.”

The publisher should “name itself the 18th Century Publishing Group,” another online user said.

In addition to fears about the harm such attitudes inflict on girls, the online reaction reflected concern about the lack of sex education in China. Teenagers often talk about how their parents explained to them as children that they emerged from armpits, or even from trash cans.

Anatomy is commonly taught as a substitute for sex education. In schools with rudimentary sex education, the message for girls is often abstinence, women’s rights campaigners say.

The textbook, first issued to high school seniors in Jiangxi Province in 2004, is old and seems to have had a limited circulation. Apparently embarrassed by the outcry, the publisher, 21st Century Publishing Group, told Sixth Tone the book would be revised.

Get news and analysis from Asia and around the world delivered to your inbox every day in the Asian morning.

Sign Up
You agree to receive occasional updates and special offers for The New York Times’s products and services.
https://www.google.com/recaptcha/api2/anchor?k=6LeN0R4TAAAAACwPa5WX2QYE0npOf2-2veTOm2Tp&co=aHR0cHM6Ly93d3cubnl0aW1lcy5jb206NDQz&hl=vi&v=r20170808164053&size=normal&cb=41ytul43ydkp

In a broader sense, the antiquated attitude of the school system is not keeping up with the sexual revolution in China. A 2012 survey published by a magazine of the central government showed 70 percent of Chinese had had premarital sex, up from just 15 percent of those surveyed in 1989.

A women’s rights advocate, Xiao Meili, 27, said the text reflected “a common idea among the Chinese public.” She added: “It is the same in Western countries in ancient times. To solve sexual problems? Try abstinence.”

For contemporary Chinese girls, the story line is dangerous, she said. “These words will hurt the young girls; they objectify women. They treat a woman as a thing, an asset.”

Ms. Xiao, who walked 1,600 miles from Beijing to Guangzhou in 2014 to raise awareness of sexual abuse, said her generation had received “basically zero” sex education.

Xiong Jing, 28, the editor of the website Gender Watch, said there was an upside to the debate because it showed that values were changing. “Many Chinese now won’t accept these biases anymore because they receive more education and more information from the internet,” she said.