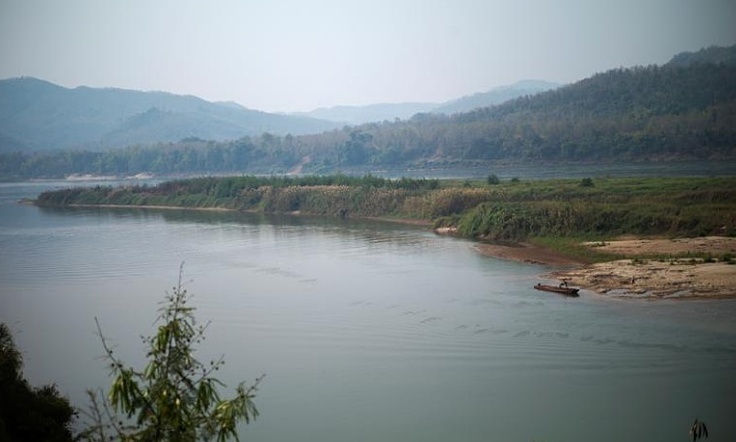 A general view of the future site of the Luang Prabang dam is seen on the Mekong River outskirt of Luang Prabang province, Laos, February 5, 2020. Photo by Reuters/Panu Wongcha-um

This could benefit millions who live downstream the Mekong River, an MRC Friday press release said.

The station sits on Laos’s northern border with Myanmar. The commission handed the station over the Laos government to operate and provide related parties with relevant data.

It will require Myanmar to jointly collect data with Lao colleagues on water discharges that will be made quickly accessible to the millions of Southeast Asians living downstream. This should enable them to adapt accordingly, like the farmers planning to harvest crops or fishermen relying on the river for their daily catch, the release said.

Dr Anoulak Kittikhoun, the MRC Secretariat CEO, said that the station would record water flow from the upper Mekong River that lies approximately 130 km from the station. If there were any change, due to water release, closing a gate, or sudden rainfall, the public would know almost immediately.

“This is a strategic monitoring station,” Kittikhoun said.

He said that with greater capabilities, the MRC can provide more information to member countries and local communities. This would require every riparian country to share more information about dam operations.

At the station’s opening ceremony, the Lao alternate member of the MRC Council, Vice Minister of Natural Resources and Environment Chanthanet Boualapha, said that by installing these stations on its territory, Laos hopes to send a message that it’s stepping up to play its part in Mekong River management and effective future forecasting.

The Xieng Kok station is one of several new monitoring stations whose construction was delayed by Covid, as it slowed the delivery of crucial supplies and spare parts.

The release said denizens of the lower Mekong River basin have been long vulnerable to the whims of water flow, human-made or caused by nature. Villages might be flooded from one moment to the next, with disastrous consequences for the families living there.

Between 2008 and 2012, 49 stations have been built along the river and its tributaries to continuously measure rainfall and water levels. They are in the first phase of the Mekong Hydrological Cycle Observing System Project (HYCOS).

Twelve of these were built in Cambodia, Laos and Vietnam, 11 in Thailand and two more in southern China, through which most of the river flows. Funding was provided by the French Development Agency (AFD).

Through HYCOS, expansion and upgrades will soon see a total of 56 stations along the Mekong, with an additional 13 on its tributaries, under Japan’s drought-management project, and two more under the MRC Joint Environment Monitoring Pilot Project.

In Cambodia, the MRC has completed one new station and refurbished another so far. Laos has seen two stations refurbished and two new stations built, including Xieng Kok. As Covid delays ease, recently completed stations have become operational in Thailand and Vietnam.

Each monitoring station is equipped with a cutting-edge “telemetry” system which transmits current water levels and rainfall data every 15 minutes: first to a central database at the MRC Secretariat, then disseminated to the member countries.