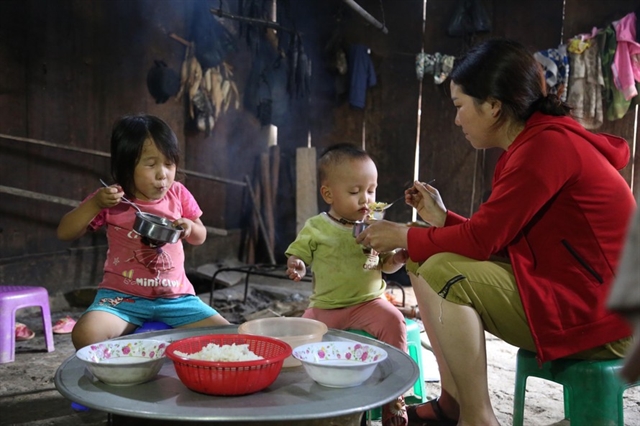 Xồng Y Pà has a simple lunch with rice and noodles with her two children. — Photo tienphong.vn

NGHỆ AN —  In a dilapidated stilt house, Xồng Y Pà, 23, started a fire to cook some food. These noodles and rice will be lunch for her and her two young children.

When the food was ready, two children with dirty faces rushed to eat. The one-year-old boy started to cry because his soup was too hot for him. Pà helped to cool his down. His three-year-old sister did not have such qualms and quickly began eating.

After eating, the two children went back outside. There was still some rice and noodles left, but Pà did not eat. Instead, she kept the leftovers for her husband, who was tending cows, and her oldest son, who is six years old, who had not returned from school.

Pà lives in Huồi Pốc Village, Nậm Cắn Commune, Kỳ Sơn District in the central province of Nghệ An. Together with her husband, Lầu Bá Dờ, 29, the couple worked in the southern province of Bình Dương. Their children remained in Nghệ An in the care of relatives.

But after just three months of working in Bình Dương Province the couple, along with so many others, found themselves unemployed as the pandemic took hold. They could not afford necessities like food or accommodation, and so decided to head back home by motorbike.

“We rode for four days and three nights. All we had to eat was bread and water,” she said.

After finishing the regulated quarantine period upon their return, Pà and her husband are back in their home now. Both are unemployed.

Pà hopes that the pandemic will soon be controlled so she can find some work. She was earning about VNĐ5 million (US$220) per month, enough to cover her daily expenses and create some savings.

“At home, the fields are small and I’m unemployed. We are submerged in poverty,” said Pà sadly.

Xồng Bá Định, 22, is in a similar situation.

Định left his hometown in Buộc Mú Village, Na Ngoi Commune, Kỳ Sơn District three years ago, bringing his family to the southern province of Đồng Nai with him to earn a living.

He earned a modest income as a mechanic; just enough to put away some savings if he was economical.

In April of this year, as the pandemic began to take hold, he had less and less work. By May he was unemployed.

“Try and hold out,” he told himself at first. His small savings were quickly spent as he waited in Đồng Nai for the pandemic to pass.

“Despite our best efforts, we couldn’t wait any longer. Our savings were exhausted,” he said.

Định and his wife discussed their options. Like Pà, they risked riding their motorbike over a thousand kilometres back to their hometown.

The return of so many people to Nghệ An has been problematic, particularly in the more mountainous and remote districts. Ensuring infrastructure is in place for quarantine facilities has been particularly difficult

The province has utilised nearly 500 schools as quarantine centres, though these facilities require a great amount of labour to function. Cooking meals and periodically sterilising all areas is time-consuming.

Kỳ Sơn District has more than 30,000 people that are of a working age; more than 5,300 of them have returned since April.

Vi Thị Quyên, deputy chairwoman of the Kỳ Sơn District People’s Committee, told the Tiền Phong (Vanguard) newspaper that arranging work for people, particularly those returning, is very difficult. The district does not have many production plants and little land for manufacture.

Quyên said that the district plans to work with the provincial Department of Labour, Invalids and Social Affairs and vocational centres in the province to promote vocational training.

Priority will be given to families that have made great contributions to the nation, and poor people.

Statistics from the Nghệ An Department of Labour, Invalids and Social Affairs, since the end of April until now, about 25,000 workers have returned to the province. — VNS