While prices of high-grade coal with higher power generation efficiency have fallen by more than 30% over the past year as developed countries have been reducing coal consumption, prices of low-grade coal have fallen more slowly. The price difference between the two categories of coal has shrunk to one-third the level of a year ago.

As coal has been increasingly blamed for its greater contribution to global warming, the difference of attitude toward the use of coal between developed countries and emerging countries has become clearer.

Of thermal coal produced in Australia, which serves as a benchmark of thermal coal prices in Asia, high-grade coal with a calorific value of 6,000 kilocalories per kilogram is currently traded at about $65 per ton, down 34% from December of last year.

The price decline reflects slowing demand for coal for use in power generation. In Japan and Taiwan, two of the main Asian markets for high-grade thermal coal, a shift from coal to renewable energy and liquefied natural gas has been accelerating with a growing environmental awareness. 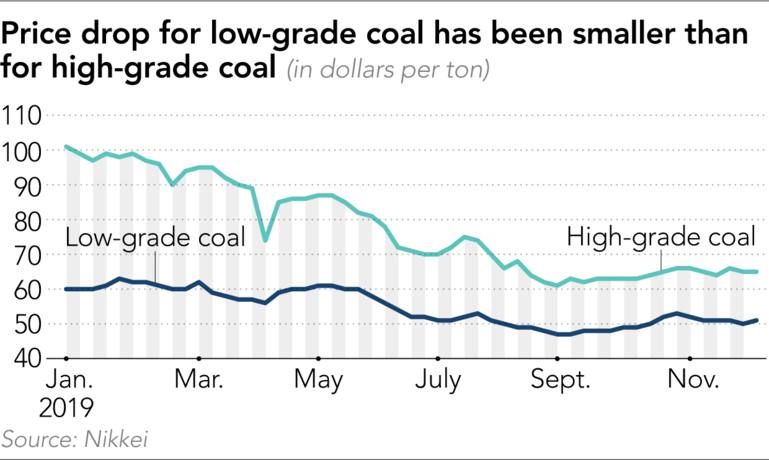 Meanwhile, prices of low-grade coal with lower calorific value, at 5,500 kcal per kg, stay at around $50 per ton, down about 15% over the past year. Cheaper low-grade coal is imported mainly by emerging countries, such as China and Vietnam. The price drop for low-grade coal has been smaller than for high-grade coal, although the coal market is weak overall amid fears of a slowdown in the global economy and falling prices of alternative fuels.

This reflects robust coal demand in emerging countries. Particularly in Vietnam, with many factories run by Japanese and other foreign manufacturers, additional thermal power plants are under construction to meet rapidly growing electricity demand. The country’s thermal coal imports in 2019 are estimated to total about 32 million tons, twice the amount for last year and up three times from three years ago.

With the U.S.-China trade disputes prompting manufacturers to move their factories from China to Southeast Asia, power demand in Vietnam is expected to continue rising. In Southeast Asia and India, coal-fired thermal power, whose generation costs are relatively low, has become a main source of electric power and the procurement of cheaper coal is increasing.

The supply of low-grade coal is not increasing in line with demand, because coal prices that have remained low for a long time have adversely impacted mining companies’ earnings.

“Materials companies are raising their production ratio for high-grade coal that can sell at higher prices in order to alleviate the earnings deterioration attributed to the weak market,” said a person in charge of coal at Idemitsu Kosan, which has coal-mining interests in Australia and other countries. Climate change activists from Greenpeace hold banners as they protest outside the EU Council headquarters ahead of an EU leaders summit in Brussels on Dec. 12.   © Reuters

The International Energy Agency forecasts that global coal demand will rise by just under 1% from 2017 to 2030, to about 5.4 billion tons. While demand is expected to decline in Japan and the U.S. as well as in Europe, which is active in reducing greenhouse gas emissions, demand in Southeast Asia and India is estimated to rise at double-digit rates.

The change in supply-demand balance for high-grade coal and low-grade coal will highlight the difference in attitude toward coal between developed countries and emerging countries.

Producing areas for low-grade coal are distributed widely in Indonesia, the U.S. and other countries, so “consuming countries can procure it from diverse regions,” said an official at the Japan Oil, Gas and Metals National Corp. However, low-grade coal is said to emit a larger amount of greenhouse gas per unit quantity of heat produced because its combustion efficiency is lower.

As the Paris Agreement, an international framework for preventing global warming, is put into operation in 2020, criticism against the use of coal will become even more intense. Japanese electric power companies are also utilizing cheaper low-grade coal. They will have to introduce technologies that reduce coal’s impact on the environment.