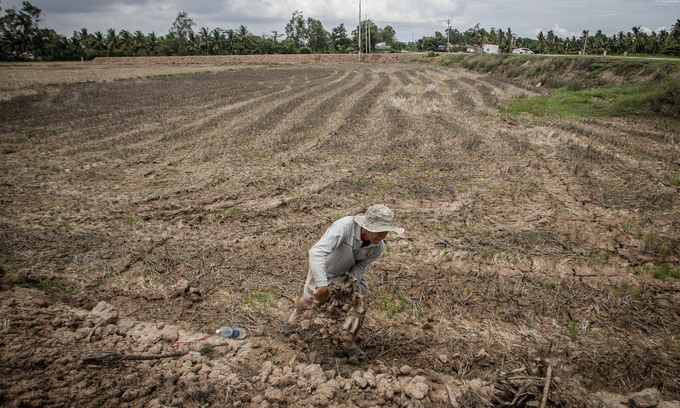 To cope with upcoming crises, the government wants all localities in the region to apply every method they can to make sure farmers and other locals have enough water for their crops and daily actitives, said Deputy Prime Minister Trinh Dinh Dung at a meeting Friday with officials of the Mekong Delta’s 13 localities, held in Ben Tre Province.

According the Ministry of Agriculture and Rural Development, the rainy season arrived late last year in the Mekong Delta and was shorter than usual, with the total rainfall of 1,240 mm, 8 percent lower than the average level of previous years.

Water levels in the Mekong River sections flowing through the delta has decreased rapidly since the dry season started in late November and is currently 2.33 meters lower than in previous years, as measured at the Kratie station in northeastern Cambodia, it said.

It is expected that the water level at this station will be 35 percent lower than previous years in the first two months of 2020 and the water amount in Tonle Sap Lake, the largest freshwater body in Southeast Asia, is now at 5.1 billion cubic meters, which is 15.7 billion cubic meters lower.

Worse than the worst

Saline intrusion has already happened at sea gates in the delta since the middle of last month, which is much earlier than normal, the agriculture ministry said.

It said that seawater could intrude 35-110 km inland, even more than in 2016, when the region was hit by the worst drought and salinity ever.

Drought and salinity could hit 10 of the 13 delta localities, with the three exceptions being Dong Thap, Can Tho and An Giang.

The entire region has more than 1.5 million hectares (3.7 million acres) of rice fields where farmers have already started planting for a new crop, and 330,000 hectares could be affected by the adverse conditions.

With funds allocated by the state along with financial aid from local companies and international organizations, more than 20,000 tanks to store fresh water have been provided for the region, apart from projects to install 1,600 km of water supply pipes and build dozens of wells.

The ministry has requested local authorities to build plans to send water tank trucks to remote areas with little access to fresh water, supply pipes as needed, apart from investing in more tanks, storage bags capable of holding 30 cubic meters of freshwater and saltwater filters made by local companies.

For the long term, the ministry has suggested that the central government continues to set aside funds for digging fresh water lakes and building embankments to prevent salt water intrusion, as also devices to automatically monitor salinity levels at sea gates throughout the region.

It also mentioned the need for large-scale solutions to help locals switch to growing crops more appropriate with current conditions.

The government should also raise its voice and ask operators of hydropower dams upstream the Mekong River to release water to downstream sections, the ministry said.