Three Vietnamese policemen who died during clashes over a land rights dispute have been buried with honours in Hanoi.

Their deaths came during a massive security operation last week in a village near the capital, in which a local leader also died.

Villagers had been resisting attempts by the military to build an airfield on their land for several years.

Land disputes are common in Vietnam, but rarely escalate into such conflict. END_OF_DOCUMENT_TOKEN_TO_BE_REPLACED

END_OF_DOCUMENT_TOKEN_TO_BE_REPLACED 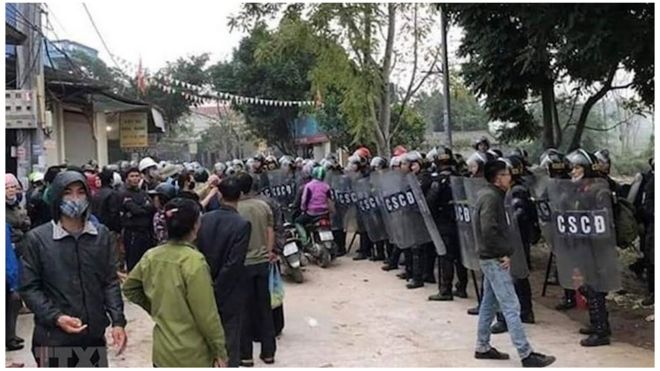 END_OF_DOCUMENT_TOKEN_TO_BE_REPLACED

reuters.com
BANGKOK (Thomson Reuters Foundation) – A deadly land dispute in Vietnam has led to a crackdown on social media posts, a sign of growing heavy-handedness by authorities as rising demand for land spurs more conflicts across the country, analysts and human rights activists said.

Four people were killed and dozens arrested last week in the northern village of Dong Tam near the Vietnamese capital of Hanoi, as a long-running land dispute flared after a dawn raid by police.

Authorities said villagers attacked the troops with hand grenades, petrol bombs and knives, and were responsible for the deaths of the three policemen and a village leader.