Anh Chi is among the few social media-savvy activists, who are trying to push the boundaries of delivering news and analysis straight to the Vietnamese public. But these days, their voices are increasingly becoming muted due to government restrictions.

The deadly January 9 incident in Dong Tam is a case in point.

According to the authorities, three police officers and 84-year-old village leader Le Dinh Kinh were killed after local residents clashed with police in the early hours of that day.

The dispute, over agricultural land next to a military airport, shocked the country.

But afterwards, Vietnam‘s cyber-army, also known as Force 47, was deployed to counter the content on social media platforms deemed critical of the way the authorities handled the situation.

The authorities also arrested three activists over posts made in relation to the dispute, while Facebook users faced restrictions.

“The Vietnamese government’s heavy-handed efforts to censor discussion of this land dispute are the latest example of its campaign to assert control over online content,” Nicholas Bequelin, Amnesty International’s regional director, said in a statement.

“Social media, particularly Facebook, is increasingly becoming weaponised by Vietnam to go after those who peacefully speak their mind. This is an unacceptable attack on freedom of expression and a clear attempt to stamp out dissent.”

Vietnam’s Force 47 is run by the Ministry of Public Security (MPS) to hack anti-government websites and spread pro-government messages online, and is believed to be at least 10,000-strong.

Anh Chi, the pen name of 46-year-old Nguyen Chi Tuyen, knows the ministry’s tactics well. He has created videos criticising Force 47, and has expressed concern about the impact of a new cyber-law that came into effect at the beginning of the month.

“I strongly oppose the many articles in it that violate freedom of speech, freedom of expression, and basic human rights,” he said.

Digital rights campaigners accuse Vietnam of attempting to replicate China’s “Great Firewall”  by regulating and censoring the internet  with the cybersecurity law.

Neither Google, which owns YouTube, nor Facebook has complied with the legislation, which requires the American tech giants to open local data storage facilities inside Vietnam by January 1.

The Asia Internet Coalition, a lobby representing Facebook and Google, said the legislation was a step in the wrong direction for the country’s growing digital economy.

The law states that “it is prohibited to use cyberspace to prepare a post and spread information that has the content of propaganda opposing the state of the Socialist Republic of Vietnam, or anything that offends the nation, national flag, national emblem, national anthem, great people, leaders, notable people and national heroes”.

As Vietnamese searched for more information about what happened in Dong Tam a week ago, some Facebook users reported receiving the message online: “Due to legal requirements in your country, we have restricted access to your profile on Facebook. This means that other people in your country cannot see your profile, and may not be able to interact with you over Messenger.”

Vietnam has a population of 96 million. With more than 60 million Facebook users, it is the platform’s one of the fastest-growing markets. 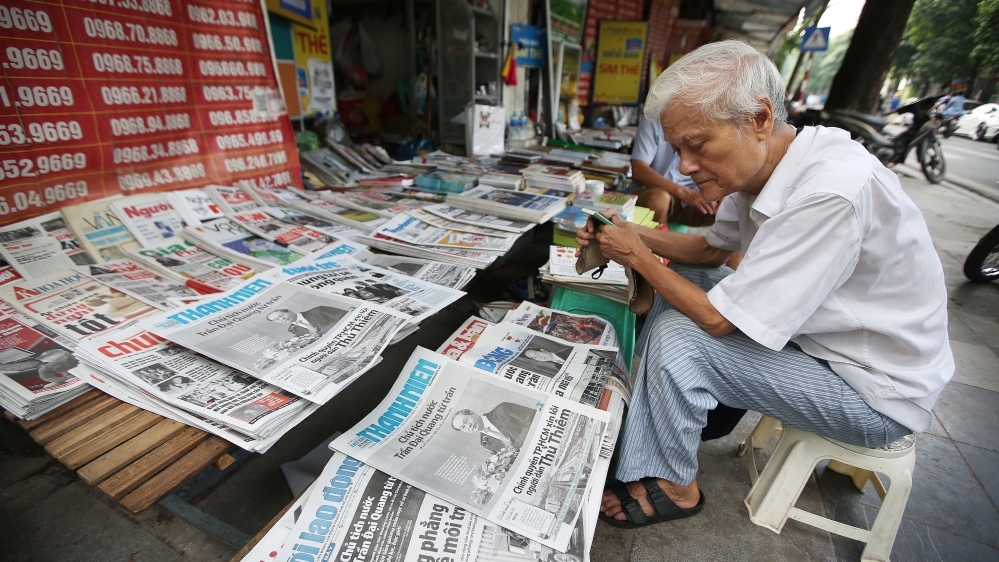 “Facebook is the main source of independent news now in Vietnam,” said Trinh Huu Long, a co-founder of Legal Initiatives for Vietnam.

“The government has been working with Facebook to try to control content posted by dissidents and independent voices,” he added.

Searches for protests in Hong Kong have also been affected. Many, like Anh Chi, blame the cybersecurity law for the filtered information.

“They know people in Vietnam are active on social media, and they follow the news, especially with what’s happening in Hong Kong every day,” he said. “The government fears that one day people in Vietnam will join such protests.”

Bao Trung, 37, started his own Facebook page called “Bao Sach [Clean Newspaper]” with five other independent journalists in 2019. The whole team used to work for the state-run media.

“Most of the people in Vietnam have Facebook accounts. Anybody can be a reporter now with a smartphone,” Bao Trung said. “I think it’s impossible for the government to control online news and information.”

Vietnam’s dispute with China over its claim on the islands and energy-rich waters in the South China Sea is also sensitive.

Vietnamese people have long viewed their northern neighbour as a threat. In June 2018, there were nationwide protests against the cybersecurity and special economic zone legislation because they were seen as favourable to Beijing.

The authorities reacted quickly to end the protests, which activists described as the biggest in Vietnam since the end of the war in 1975.

Vietnam’s cybersecurity law stipulates that social media platforms must allow the authorities access to local user data. The government has even pledged to create its own Vietnamese platform to rival Facebook, although its attempts have failed.

The Ministry of Public Security claims the cybersecurity law is needed to stop cyber-threats and attacks against Vietnam.

Anh Chi does not seem bothered by  such threats. He had a blog on Facebook for nine years until he switched recently to YouTube. But with a decade of political activism under his belt, he calls himself “the people’s journalist”.

In a country where state institutions, from citizens committees, to the military and newspapers refer to themselves as “the people’s [nhan dan]”, this claim may ring hollow with his audience – which he said ranges from local street vendors to government civil servants. 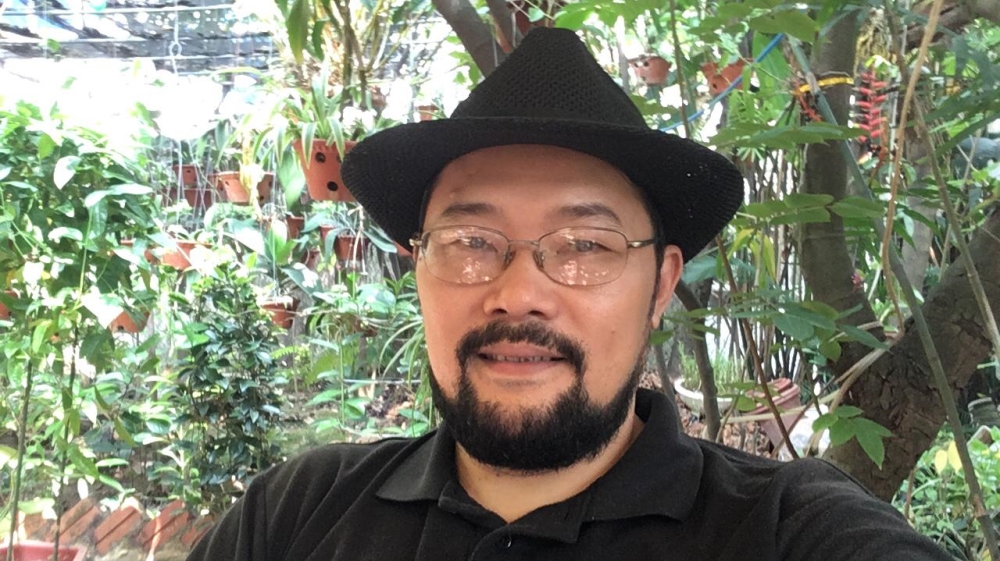 With a decade of political activism under his belt, Anh Chi calls himself ‘the people’s journalist’ [Adam Bemma/Al Jazeera]

“I choose to spend my time on YouTube rather than Facebook because Vietnamese people are busy with work,” he said. “They have smartphones, so while they’re working they can listen to the story rather than having to read.”

Reporters Without Borders ranks Vietnam near the bottom of its 2019 World Press Freedom Index at 176 out of 180 countries listed. Freedom House labels Vietnam as “Not free”.

The 88 Project for Free Speech in Vietnam states there are 276 activists currently in prison, while human rights group Defend the Defenders monitored the cases of 36 convicted in 2019. 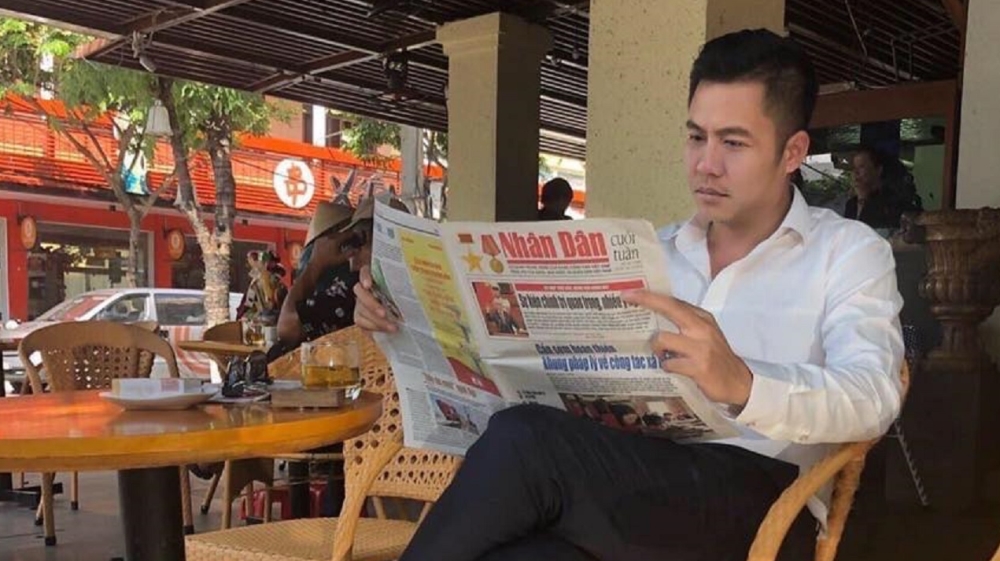 Vietnam’s government disputes these statistics, but under the country’s legal system they already have several laws to prosecute online dissenters.

Many fear the cybersecurity law is just another layer – a way to deter people even from questioning the government.

Anh Chi is unbowed, saying he will continue to speak out. He dedicated an entire episode on his YouTube channel to Le Dinh Kinh, the elderly man killed in Dong Tam last week.

“If they want to arrest anyone of us, they can do it. There are many laws in the penal code to use against us,” Anh Chi said. “We’re ready to defend our human rights. That’s our challenge and our mission.”