Sharia prosecutors in Indonesia’s Aceh province say two men on trial for gay sex should each be punished with 80 lashes, in another blow to the country’s moderate image after a top Christian official was imprisoned for blasphemy.

The lead prosecutor, Gulmaini, who goes by one name, said on Wednesday the two men aged 20 and 23 had “confessed” to being in a gay relationship, which was supported by video footage and other evidence found in their rented room.

The men were led into the court handcuffed together and pulled their shirts up to partially obscure their faces.

They were arrested in late March after neighbourhood vigilantes in the provincial capital, Banda Aceh, suspected them of being gay and set out to catch them having sex. Mobile phone footage that circulated online and forms part of the evidence shows one of the men naked and visibly distressed as he apparently calls for help on his cellphone. The second man is repeatedly pushed by another man who is preventing the couple from leaving the room.

If found guilty the men will be the first to be caned for gay sex under a new sharia code implemented in Aceh two years ago. Aceh is the only province in Muslim-majority Indonesia to practice sharia law, which was a concession made by the national government in 2006 to end a years-long war with separatists.

Indonesia’s reputation for practising a moderate form of Islam has been battered in the past year due to attacks on religious minorities, a surge in persecution of gay people and a polarising election campaign for Jakarta governor that highlighted the growing strength of hardline Islamic groups.

On Tuesday the outgoing Jakarta governor, a minority Christian, was sentenced to two years’ prison for blasphemy against the Qur’an. 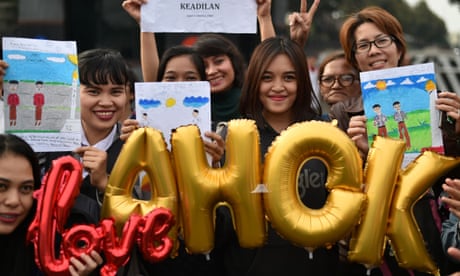 Protests in Jakarta after Christian governor convicted of blasphemy

In Aceh the sharia court’s panel of three judges will announce its verdict next week.

Gulmani told reporters that the men did not accept the court’s offer to appoint a defence lawyer. He declined to elaborate but guilty verdicts are certain in most cases that reach the sharia court.

The sharia code allows up to 100 lashes for morality offences including gay sex. Caning is also a punishment for adultery, gambling, drinking alcohol, women who wear tight clothes and men who skip Friday prayers.

Human Rights Watch has called for authorities to immediately release the two men. “These men had their privacy invaded in a frightening and humiliating manner and now face public torture for the ’crime’ of their alleged sexual orientation,” it said in a statement last month.