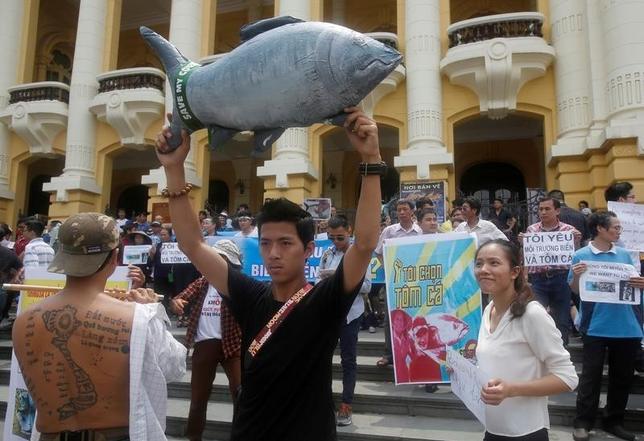 Demonstrators, holding signs of environmental-friendly messages, say they are demanding cleaner waters in the central regions after mass fish deaths in recent weeks, in Hanoi, Vietnam May 1, 2016.
Reuters/Kham

Vietnamese police broke up a demonstration in the capital, Hanoi, on Sunday when protesters gathered for the second time in a week to denounce a Taiwanese firm they accuse of causing mass fish deaths in central coastal provinces.

Hundreds took to the street in Hanoi and Ho Chi Minh City, Vietnam’s second-largest city, last week to vent their anger at a unit of Taiwan’s Formosa Plastics, even though an official investigation found no links between the fish deaths and Formosa’s $10.6 billion coastal steel plant.

A group of protesters sat on the bank of a big lake in Hanoi before police shepherded them on to a waiting bus, Reuters witnesses said. Demonstrators were also put on buses at a square in front of the nearby Hanoi Opera House.

Demonstrations are rare in Vietnam and are often quickly suppressed by uniformed and plain-clothes police. State-controlled media has not reported any of the demonstrations.

The fish mass deaths emerged a month ago in the central province of Ha Tinh, where the Formosa unit runs the steel plant. Fish also washed ashore in three other provinces along a stretch of 200 km (125 miles).

The government has invited experts from Germany, Japan, the United States and Israel to inspect the Ha Tinh site in an attempt to find the cause that led to the fish deaths.

The inspectors have yet to announce their findings.

The government’s initial investigation said the cause could be “red tide”, when algae blooms and produces toxins, or a release of toxic chemicals by humans.