The loss of sand has caused erosion and increased salinity as well as subsidence in the Mekong Delta.

The studies of the Mekong River by Prof Stephen Darby from Southampton University found that within several years, the river bed fell by several meters on a section of hundreds of kilometers in length. 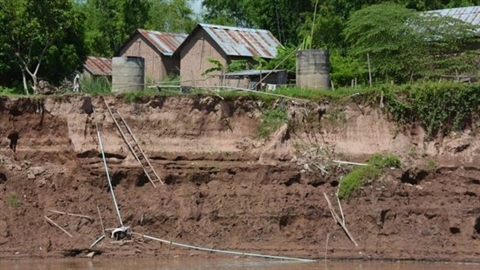 The World Wildlife Fund (WWF) and Mekong River Commission (MRC) also said the river bed of Mekong’s two major tributaries in the delta decreased by 1.4 meters in 1998-2008. The overexploitation of sand is the reason, they said.

The study published in Nature journal last November showed that sand exploitation on a river section tens of kilometers long was unsustainable because it cannot be replaced quickly enough by natural sediment from the river upstream.

Expressing his worry about the changes, Vu Trong Hong, former Deputy Minister of Agriculture and Rural Development, said there are many reasons causing the lowering of the river bed.

First, the silt is blocked by hydropower works in the upper course. Sediments include sand, gravel and pigments. Without sand and gravel, the river bed has been lowered gradually.

“In principle, to push water away, there must be a certain amount of sand and mud. When the water is clear, the river does not flow. It is just like a reservoir. The river has to ‘snap’ the riversides and it will only continue flowing when it can get enough sand,” Hong explained.

“This is why the Mekong river bed has declined and it will continue declining very rapidly,” Hong warned.

Vietnam plans to set up many new urban areas and open new highways. Where will the sand and gravel be obtained for these construction works?

“When considering construction projects, it is necessary to think about how much natural resources the works will need and if the existing resources can satisfy the demand,” he said.

“Too many urban area projects have been licensed, which has resulted in a sharp decrease in natural resources and the erosion of the river bed,” he concluded, adding that the unreasonable programming, not sand exports, have caused the lowering of the river bed.