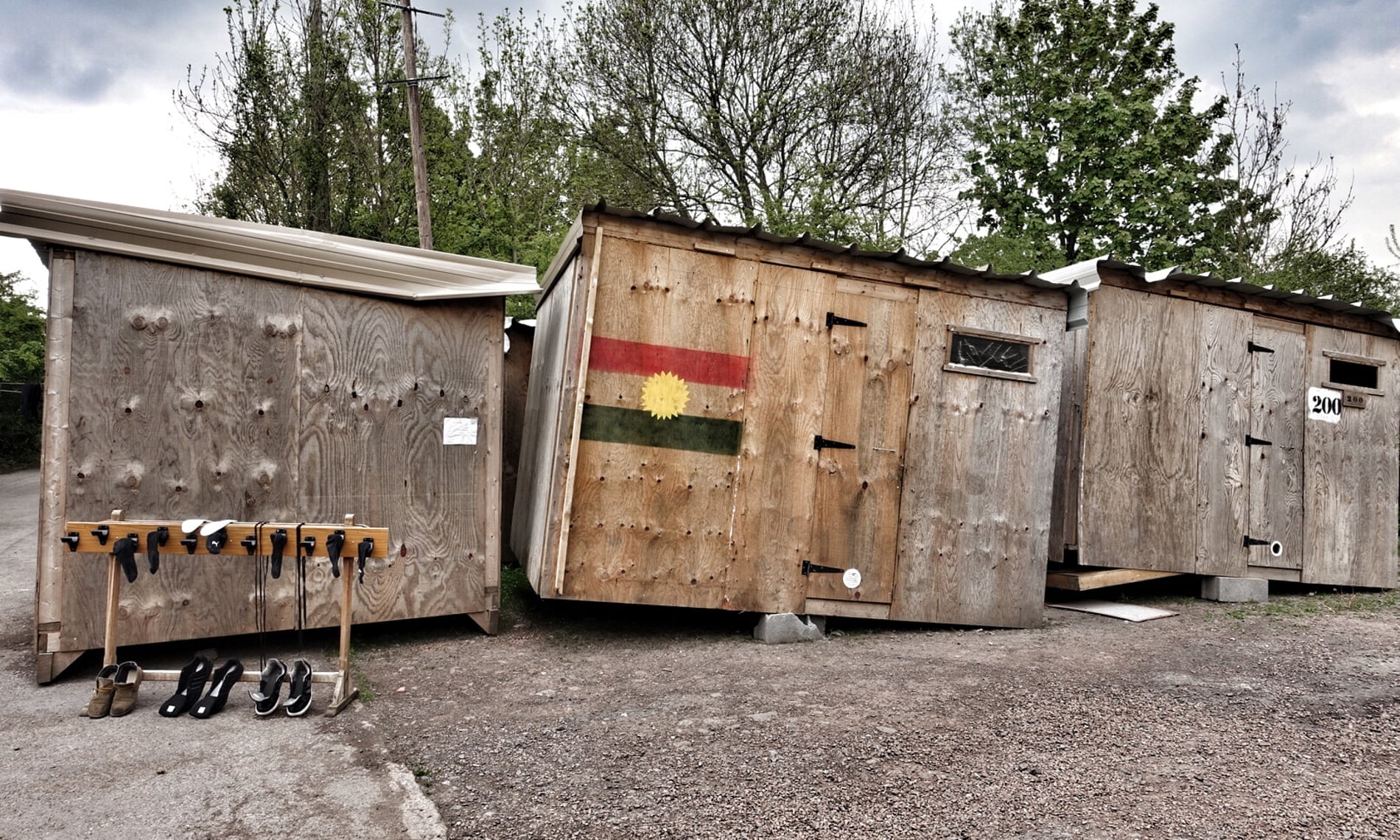 Hidden in woodland, camp houses up to 100 Vietnamese people allegedly on their way to work illegally in Britain

Detailed accounts of a holding camp in Northern France, where hundreds of vulnerable Vietnamese young people are housed every year before being smuggled into exploitation in the UK, have prompted anti-trafficking charities to call on the British and French governments to disrupt the criminal networks running the site.

Hidden in woodland, on the site of an old coalmine, the well-organised camp known as Vietnam City is usually home to between 40 and 100 Vietnamese migrants, some of them minors, who are on their way to the UK to work illegally in cannabis farms, nail bars and restaurants, according to charity workers who recently visited. New, previously unpublished photos from the camp show squalid living conditions, with residents cooking and sleeping in unsafe conditions in a derelict coalminers’ barracks, with a collapsed roof and no heating.

The site, about 60 miles (100km) south-east of Calais, has been chosen by traffickers because of its proximity to a service station on the motorway where lorry drivers stop to rest, before travelling to the ferry port to cross to England. There is less security here than at the port, so it is easier to smuggle people into vehicles.

Although the site is understood to have existed for over a decade, hidden in plain sight at the edge of the town of Angres, there has been little concerted effort to close it by the French police and no effective work done by British authorities to address the smuggling of Vietnamese people through France.

A group of local residents, the Collectif Fraternité Migrants, pays for wood for the stove and has installed a generator in the camp, and food donations are delivered once or twice a week. The local government has supplied cold running water, and a French medical charity makes weekly visits to the site.

The issue of trafficking and exploitation of Vietnamese people in cannabis farms and nail bars in the UK is the subject of a report from the UK’s anti-slavery commissioner, Kevin Hyland, due to be published on Monday. However there is growing frustration from charities working to protect Vietnamese people trafficked into the UK that so little has been done to stop the trade in vulnerable people from impoverished rural parts of Vietnam.

In recent years police have repeatedly raided cannabis farms across the UK, staffed by Vietnamese young people. Earlier this year a former nuclear bunker in Wiltshire was found to have been converted into a cannabis farm on an industrial scale, with four Vietnamese workers locked inside. There have been no prosecutions of people-traffickers bringing Vietnamese labourers into the UK, although last month a British woman was found guilty of trying to smuggle 12 Vietnamese migrants into the UK from Calais, in a van loaded with tyres. Four men, five women and three children were found after a Border Force officer saw a pair of legs protruding from the tyres in the back of the van.

Chloe Setter, head of advocacy, policy and campaigns at Ecpat UK, which works on child-trafficking to Britain, said: “Vietnam is almost consistently the top country for adults and children trafficked to the UK and it has been well documented that there has been a ‘Vietnam City’ in northern France where many Vietnamese migrants pass through en route to the UK. Yet there appears to have been little effort made by the UK or French authorities to prevent or disrupt the trafficking of Vietnamese people to the UK, despite the known threat.

“It quite beggars belief that vulnerable children and adults have been allowed for so many years to live in an isolated makeshift encampment in a forest and left open to such a huge risk of exploitation. Such inaction renders the UK government’s purported tough approach to modern slavery pretty hollow.”

Mimi Vu, of the Vietnam-based anti-trafficking charity Pacific Links Foundation, has visited the camp twice in the past year. She said there were 39 men and one woman at the site when she visited in May. A few of the group were minors.

“Everyone in the camp planned on working in nail salons in the UK, even though none had prior experience or training as nail technicians,” she wrote in a report on the visit. They had been told that it was usual “for men to be nail technicians in the UK, and that western women were used to men doing their nails”. There was disbelief when “we tried (gently) to correct these assumptions,” she wrote. All the camp’s residents assumed that they would find work easily in the UK and none wanted to remain in France.

Some were aware of the issue of exploitation in cannabis farms in the UK, but did not believe it would happen to them, Vu said. She believes that the camp has continued to exist under the radar because the migrants are not looking to work in France and are not a strain on local resources. Everyone is housed there temporarily until they are able to get on a lorry to take them to the UK. Most are there between a week and two months.

A recent study published by the charity France Terre d’Asile suggests that most migrants in the camp are fleeing poverty in rural parts of Vietnam, where the average salary for people working in agricultural labour is £88 a month. Some have paid up to £33,000 to agencies to be taken to the UK to work. Others have been tricked into exploitation, and told that they will be given legal jobs in the UK.

Local volunteers understand that the Angres mayor’s office has plans to demolish the unsafe buildings later this month, prompting concern about where the camp’s residents will relocate.

A spokesman from the NSPCC’s child-trafficking unit described the camp as “unregulated and dangerous”.

“Children being trafficked to the UK from Vietnam continues to be a significant concern in the UK and we must try to protect those we know are at risk”, he said. “There need to be facilities in place that can stop young people from falling into the hands of traffickers, who often deceive them with promises of a better life.