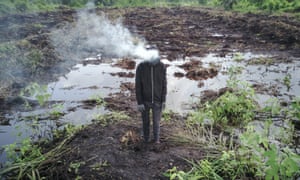 When smoke from Indonesia’s palm oil industry reached the studio of artist Ernest Zacharevic in Malaysia, a unique project was born. Intent on making the world reconsider the environment, Zacharevic sold one of his prints to raise funds for Splash and Burn, a public art campaign. The title is a play on the ‘slash and burn’ practices used by palm oil producers to clear land for farming

On a swampy patch of degraded forest land on the Indonesian island of Sumatra stands a hooded black figure, face obscured by plumes of smoke. Something strange is afoot.

Behind it all is a unique project, the brainchild of Lithuanian artist Ernest Zacharevic, who has spent the past year secretly curating a group of international artists in a collective, artistic response to the global palm oil industry.

Dotted across various sites and cities in Sumatra, the project is called Splash and Burn. The title is a play on “slash and burn”, the term used to describe the cheap method used by smallholder farmers to clear land for oil palm plantations.

The artist was provoked into action all the way from his studio in Penang, a city in neighbouring Malaysia where his work is playfully displayed on colonial-era buildings. Slash and burn methods often cause forest fires, creating a haze that affects the entire region. In late 2015, the problem – exacerbated by a protracted El Niño – reached epic proportions.

Tens of thousands of acres of rainforest were engulfed in flames, pollution indexes shot up to 2,000 – anything above 300 is considered hazardous – and six provinces declared a state of emergency as hundreds of thousands struggled to breathe the toxic yellow air.

As thick clouds of smoke from Sumatra and Indonesian Borneo wafted over to Malaysia and Singapore, enveloping Zacharevic’s Penang base, he began to reflect on Indonesia and its role in the palm oil industry.

I was thinking about how little we know about it, but how much we are involved in it economically, through palm oil. That was really how my art became directed to it

Indonesia is the world largest producer of palm oil, a vegetable oil so ubiquitous it is in about half of all packaged products – from lipstick and pizza dough to shampoo and ice cream – sold at your supermarket.

The idea, says Zacharevic, was to use street and public art to start a dialogue, a creative campaign to draw awareness to deforestation, the displacement of wildlife, and other issues connected to the industry.

One mural, which features children and an orangutan on a rickshaw, was painted around an existing sign that said dilarang masuk, meaning “no entry”. The children, he says, are a slightly cheeky symbol of surpassing taboo.

Each work in the Splash and Burn series was designed to highlight unregulated farming practices in the palm oil industry. Collaborators included the Sumatran Orangutan Society, a charity based in Oxfordshire, the Orangutan Information Centre in Indonesia, and a slew of local NGOs.

Speaking of his quirky but somewhat haunting figures, American installation artist Mark Jenkins says he wanted to interrogate ideas of ignorance and perception.

Ostriches also loomed large. Several of Jenkins’ installations feature figures with buried heads, an ostrich-like abstraction of ignorance, or just a pair of legs poking out. At first glance they appear to be dead bodies.

“We live in a culture now where people are so engrossed in their cell phones and things like that so they don’t really pay attention to surroundings,” says Jenkins, “So it almost takes something super surreal, or something that looks like a dead body to get people to stop.”

Post Banksy, Jenkins describes the Sumatra project as a reimagining, a reinvigoration of street art, refocused on the grassroots.

Among the eight artists involved are Britain’s Gabriel Pitcher, who painted the old woman at the window, Norwegian stencil artist StrØk, aka Anders Gjennestad, and the Spanish sculptor Isaac Cordal, whose series of poignant miniatures including a skeleton in a suit. Also involved are Italy’s Pixel Pancho, Malaysian painter Bibichun, and Axel Void, an American-born Spanish artist who is also working on a film exploring the lives of children born on the island’s plantations.

Together with coordinator Charlotte Pyatt, Zacharevic has spent almost two years carefully orchestrating and secretly curating the project. The pair envisage that Splash and Burn will soon evolve into a regional exhibition.

Zacharevic says Splash and Burn is not so much anti-palm oil as a call to reconsider our environment.

I want to bring the artist and the viewer out of the box, looking at our dialogue and seeing that we can be conscious