This news was troubling, considering the fact that the World Health Organization recently declared Roundup’s active ingredient “probably carcinogenic to humans.” The 2015 WHO announcement raised major alarms because roughly 89 percent of American corn and over 90 percent of all soybeans produced in the United States—millions of tons of which are exported every year to dozens of countries around the world—are genetically engineered to be herbicide resistant, Roundup Ready being a preferred variety. These findings gave new scientific fodder to many GMO opponents who have long alleged that the world’s food supply is awash in dangerous chemicals.

But while new emails raise serious questions about the safety of consuming food contaminated with Roundup, historical documents reveal troubling issues further upstream. I obtained files from the EPA via a Freedom of Information Act request that tell the story of Roundup’s origins at a Superfund hazardous waste site. [Read about the U.S. Environmental Protection Agency’s Superfund Program here] These documents show that there are disturbing environmental and human health concerns at the beginning, not just at the end, of Roundup’s lifecycle.

Monsanto’s weedkiller comes from beneath the soil. The active ingredient in Roundup is glyphosate, which is ultimately derived from elemental phosphorous extracted from phosphate rock buried below ground. Monsanto gets its phosphate from mines in Southeast Idaho near the town of Soda Springs, a small community of about 3,000 people. The company has been operating there since the 1950s.

I went to visit last summer, and what I found was startling. I stood just beyond a barbed-wire fence at about nine o’clock at night and watched as trucks dumped molten red heaps of radioactive refuse over the edge of what is fast becoming a mountain of waste. This dumping happened about every fifteen minutes, lighting up the night sky. Horses grazed in a field just a few dozen yards away, glowing in the radiating rays coming from the lava-like sludge. Rows of barley, for Budweiser beer, waved in the distance.

When phosphate ore is refined into elemental phosphorous, it leaves a radioactive by-product known as slag. Monsanto’s elemental phosphorous facility, situated just a few miles from its phosphate mines, produces prodigious quantities of slag that contains elevated concentrations of radioactive material. For years, this slag was actually sold to the town of Soda Springs and nearby Pocatello, and people built their homes and roadways out it. In the 1980s, however, the EPA conducted a radiological survey of the community and warned that citizens might be at risk from elevated gamma ray exposure. The study concluded that if business continued as usual in Soda Springs, within four decades “the probability of contracting cancer due to exposure from elemental phosphorous slag” would “be about one chance in 2,500 in Pocatello and one chance in 700 in Soda Springs.”

The EPA, facing serious pressure from Monsanto and community members who feared what this study might mean for property values, later agreed to submit the report for review, and ultimately recommended the initiation of new studies. In the meantime, the mayor of Soda Springs worked with the city council to ban the further sale of slag in the community.

I spoke with a radiological scientist who studied the slag issue in the area for many years, and he assured me that homeowners in Southeast Idaho are exposed to only small levels of gamma radiation that should not be harmful—currently the EPA’s official position.

Nevertheless, a website created by the Phosphorous Slag Technical Work Group—a coalition that includes Monsanto, EPA officials, local public health agents, and other mining concerns—offers advice to Idahoans, including the helpful tip that if dangerous contamination is found, homeowners might consider “spending less time in the basement.”

Monsanto’s Soda Springs plant is currently an active Superfund site, having achieved that toxic waste site designation in 1990. Harmful onsite pollutants include cadmium, selenium, and radioactive radium all of which can cause serious health problems in humans in high concentrations. 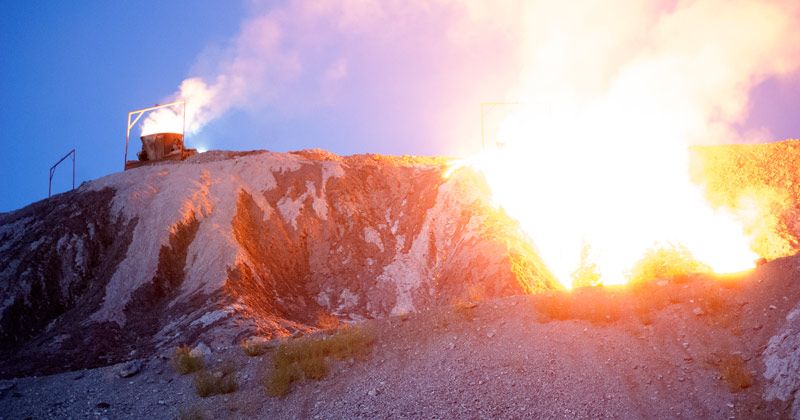 In 2013, over two decades after EPA declared Monsanto’s Soda Springs plant a Superfund site, the EPA explained that pollution problems continued to plague the facility: “The remedy for the Monsanto site is currently not protective because concentrations” of “contaminants of concern” continued to leach into groundwater. In a five-year review of the site, the EPA found that some harmful chemicals were increasing in plumes migrating from the plant. The agency offered a disheartening conclusion: “Monitoring trends indicate that the groundwater performance standards will not be met in the foreseeable future.” This was the last five-year review of the site to date. Currently, the EPA’s website for the facility reports that groundwater contamination is “not under control” even as elemental phosphorous production continues.

In the past, Monsanto has also had elevated levels of mercury emissions at the plant. Citing an EPA study, Keith Riddler of the Associated Press reported that in 2006 “about 684 pounds of mercury was emitted in [Idaho], 659 of that from Monsanto Co.’s Soda Springs phosphate processing plant in eastern Idaho.” In 2015, the company reported mercury compound emissions topping 875 pounds. For context, the third- and fourth-largest emitters of mercury compounds among power plants in the United States—which the Obama administration targeted for serious mercury emissions reductions under the Clean Power Plan—put out 823 pounds and 782 pounds respectively in 2013.

Toxic chemicals are not confined to Monsanto’s processing facility. In 2003, the EPA began Superfund remediation assessments at three closed Monsanto mine sites nearby—Ballard, Henry, and Enoch Valley—due in large part to selenium contamination in mining debris.

According to the U.S. Government Accountability Office, since 1996, “an estimated 600 head of livestock (including horses, cattle, and sheep) have died after ingesting plants or surface water containing high concentrations of selenium.” Some of these incidents took place at mine sites owned by other phosphate companies in the area, such as FMC, but Monsanto mines have contributed to this casualty count over the years.

Radioactive waste piles, groundwater pollution, mercury emissions, and poisoned livestock: these are just some of the supply-side costs of producing Roundup, an herbicide that Monsanto dubs the lynchpin of its “environmentally responsible weed control program.”

The prospects for resolution of these problems are bleak. President Trump’s EPA administrator, Scott Pruitt, is an avowed adversary of the agency he now heads, and he has given clear signs that he intends to annul regulations designed to curb polluting practices. If the EPA’s relationship with corporations like Monsanto was already cozy, it is likely only to become more so. In other words, Monsanto is not likely to face renewed federal pressure to clean up its act anytime soon.

As Monsanto looks to seal a multibillion-dollar merger with German rival Bayer, its power to spread Roundup around the world is due to expand in the years ahead. And if the past is any indication, Monsanto’s message to the world will be one of agricultural salvation through biotechnology. But communities that are the target of these corporate promises should take heed. The sustainable future Monsanto hawks remains tied to a toxic Superfund past that is not even past.

Bart Elmore is an assistant professor of environmental history at the Ohio State University and a Carnegie Fellow at New America.