END_OF_DOCUMENT_TOKEN_TO_BE_REPLACED

Summary: Researchers have found a variety of diseases and other health problems in the second- and third-generation offspring of rats exposed to glyphosate, the world’s most popular weed killer. In the first study of its kind, the researchers saw descendants of exposed rats developing prostate, kidney and ovarian diseases, obesity and birth abnormalities.

Washington State University researchers have found a variety of diseases and other health problems in the second- and third-generation offspring of rats exposed to glyphosate, the world’s most popular weed killer. In the first study of its kind, the researchers saw descendants of exposed rats developing prostate, kidney and ovarian diseases, obesity and birth abnormalities.

Michael Skinner, a WSU professor of biological sciences, and his colleagues exposed pregnant rats to the herbicide between their eighth and 14th days of gestation. The dose — half the amount expected to show no adverse effect — produced no apparent ill effects on either the parents or the first generation of offspring. END_OF_DOCUMENT_TOKEN_TO_BE_REPLACED

END_OF_DOCUMENT_TOKEN_TO_BE_REPLACED

Source:University of Texas at Austin

Summary: Honey bees exposed to glyphosate, the active ingredient in Roundup, lose some of the beneficial bacteria in their guts and are more susceptible to infection and death from harmful bacteria. Scientists believe this is evidence that glyphosate might be contributing to the decline of honey bees and native bees around the world.

Glyphosate might be contributing to the decline of bees around the world.
Credit: © marina_foteeva / Fotolia

END_OF_DOCUMENT_TOKEN_TO_BE_REPLACED

In its quarterly report released on today, German agrochemical giant Bayer, that now owns its American counterpart, said that the number of Monsanto-related ligitations in the US has reached 8700. [EPA]

END_OF_DOCUMENT_TOKEN_TO_BE_REPLACED

Monsanto denies that glyphosate, the world’s most widely used herbicide, causes cancer and says decades of scientific studies have shown the chemical to be safe for human use.
END_OF_DOCUMENT_TOKEN_TO_BE_REPLACED

DW_The European Union is deciding about the future of glyphosate — a controversial herbicide that may be linked with cancer. DW offers an overview on the most important points of the debate.

Despite warnings over potential risks to human health and the environment, farmers around the world are dependent on chemical giant Monsanto’s herbicide Roundup. Active ingredient: glyphosate.

In June 2016, European Union member states delayed a final decision on renewal for the weed killer, instead extending the license for 18 months. In October and November 2017, the European Commission again pushed back a vote on the issue. 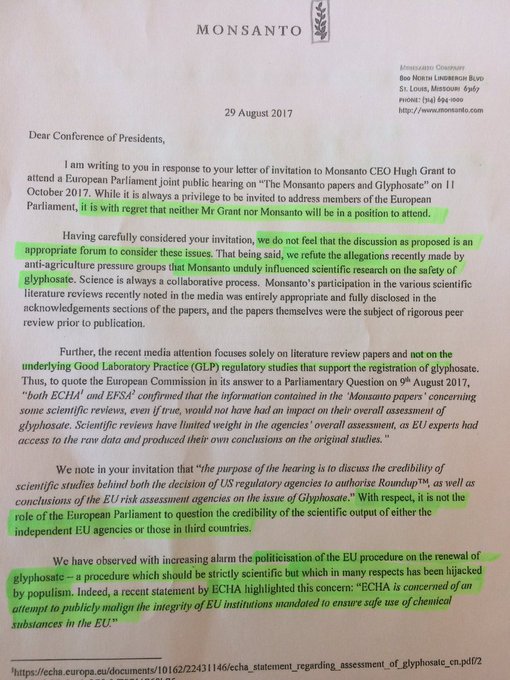 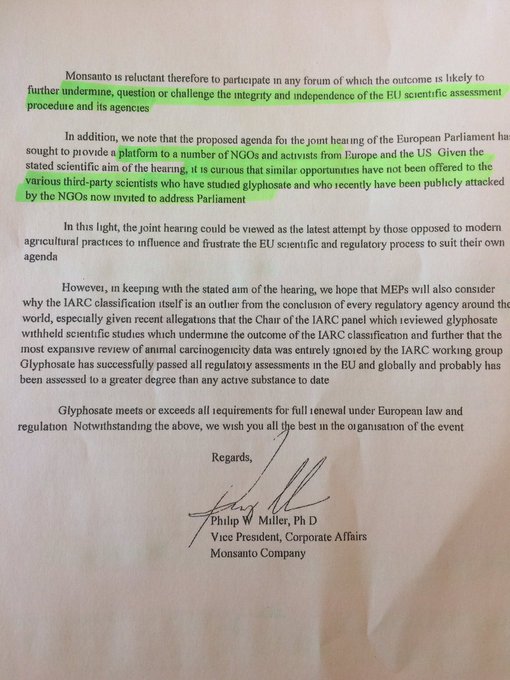