Science advances by debate. Unlike in politics, scientific arguments need to be backed by evidence and scientific reasoning.

These concerns surfaced again with the recent decision by the American Association for the Advancement of Science (AAAS) to award, and then suspend its 2019 Scientific Freedom and Responsibility Award.

On Feb. 4, the AAAS announced that “two public health researchers who battled powerful corporate interests to uncover the deadly effects of industrial herbicides, solving a medical mystery and protecting the health of farming communities across the world” were the latest winners of the award.

The AAAS press release said Sarath Gunatilake and Channa Jayasumana, both from Sri Lanka, had “faced death threats and claims of research misconduct while working to determine the cause of a kidney disease epidemic that has claimed tens of thousands of lives in their home country of Sri Lanka and around the world. Ultimately, their advocacy led to the culprit, an herbicide called glyphosate, being banned in several affected countries.”

The announcement immediately ran into a Twitter storm linked to the original AAAS tweet and stirred heated discussions elsewhere. Arguments raged between those who defended the duo and others who demanded evidence that glyphosate, best known as the key ingredient in the widely used and controversial herbicide Roundup, causes chronic kidney disease of uncertain etiology, or cause, known as CKDu.

Two days later, the AAAS changed its mind: “We are taking steps to reassess the 2019 Award for Scientific Freedom and Responsibility, after concerns were voiced by scientists and members. This award will not be presented next week as originally planned while we further evaluate the award selection.”

The AAAS also removed its press release, but several other websites had by then archived the original, or republished it. The award was not presented at the AAAS annual meeting held from Feb. 14 to 17 in Washington, D.C.

This year’s recipients of the AAAS Award for Scientific Freedom & Responsibility: Drs. Sarath Gunatilake & Channa Jayasumana who battled corporate interests while determining the cause of a kidney disease epidemic that claimed tens of thousands of lives. https://fcld.ly/hfs19n1 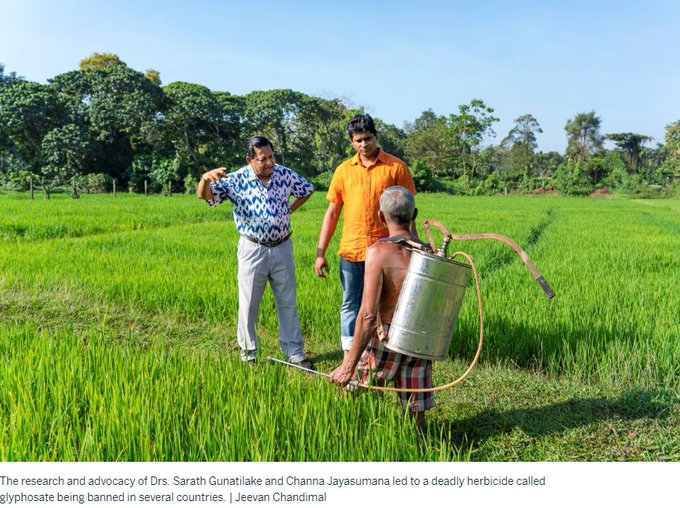 We are taking steps to reassess the 2019 Award for Scientific Freedom and Responsibility, after concerns were voiced by scientists and members. This award will not be presented next week as originally planned while we further evaluate the award selection.

85 people are talking about this

On Feb. 28, Mongabay reported that the AAAS had appointed a panel of experts to evaluate the scientific findings underlying the awards selection.

This controversy raises important questions about scientists’ role and responsibility in advocating for policy or regulatory changes, especially on issues where evidence is inconclusive or elusive.

What happens when some scientists become campaigners for environmental conservation or public health? Their causes may be laudable, but they must still be held to the same standards of rigor and scrutiny.

What is the right time for researchers to sound the alarm about a possible environmental or health hazard — when a correlation is detected, or only after some evidence is found for causation? How should policymakers respond to unresolved scientific debates where opinion is divided? Is the precautionary principle good enough to impose restrictions or bans that can have far-reaching consequences?

There are no easy answers, as we have seen in Sri Lanka where local and foreign researchers have been probing CKDu’s causes for more than two decades.

The disease was first reported from Sri Lanka’s rice-farming areas in the early 1990s. Hundreds of people were diagnosed with kidney failure, but none had the common trigger factors of diabetes or high blood pressure. Most were male farmers between 30 and 60 years old. The disease built up stealthily, manifesting only in advanced stages. By then, regular dialysis or transplants were the only treatment options.

Various environmental, geochemical and lifestyle-related factors have been examined, resulting in many peer-reviewed papers. More than two dozen hypotheses have been proposed, none proven as yet. The link to glyphosate is one.

The most comprehensive, multidisciplinary research project in Sri Lanka, conducted between 2009 and 2011, concluded that CKDu (chronic kidney disease of undetermined causes) resulted from not one but multiple factors. The findings, published in BMC Nephrology in August 2013, cited as risk factors long-term exposure to low levels of cadmium and arsenic through the food chain, which are linked to the widespread use of chemical fertilizers and pesticides. Selenium deficiency in the diet and genetic susceptibility might also play a part.

CKDu has been reported from other tropical countries, inspiring similar quests. A systematic review in 2015 that considered 1,607 papers from around the world concluded: “Studies examining etiologies of CKDu have reported many exposures that are heterogeneous and vary by region.”

One thing is certain: CKDu has become a humanitarian emergency in Sri Lanka, placing additional pressures on the already stretched public health system that provides free health care to all citizens.

Lack of timely and accurate data is also a concern, leaving room for activists to exaggerate the numbers affected. Recent media reports quoted an official count of 400,000 cases, but the actual number could be different. There is no reliable estimate of deaths attributable to CKDu.

Successive Sri Lankan governments have sanctioned more funds for screening and surveillance for CKDu as well as patient management. Significant investments have also been made to improve the quality of drinking water supplies (a development goal on its own).

The mystery of what exactly causes CKDu remains. As humans are exposed to multiple factors over time, pinpointing a single “rogue element” is never easy. While researchers try to crack this tough puzzle, some activists have been quick to assign the blame.

In 2011, a group of scientists turned activists claimed that CKDu was caused by excessive arsenic in imported pesticides and chemical fertilizers, when it combined with calcium in hard water. Their hypothesis became controversial when one researcher claimed to have derived key insights through a “divine intervention” from a local deity!

Agrochemicals are among the suspects, and the double-edged legacy of the green revolution must be critiqued. Bashing agrochemicals and their producers is a common practice among eco-activists. But should credentialed researchers resort to similar tactics?

Activist researchers can learn a few things from marine biologist Rachel Carson, whose 1962 book Silent Spring warned the U.S. public about the indiscriminate use of pesticides there.

Carson was an early practitioner of evidence-based policy advocacy. She spent years gathering the information and organizing her material before writing her best-known book. She drew on an informal network of scientists around the country. Her biographers note how she remained calm and focused amid skepticism and adversity.

A human tragedy like CKDu needs interim and long-term solutions, but the crisis cannot be an excuse for bypassing the scientific process or panicking policymakers.

That is what happened in Sri Lanka, where the government banned glyphosate in 2015. The president, hailing from an area where CKDu is rampant, acted on unproven science.

The National Academy of Sciences Sri Lanka, an independent body, said at the time: “We are not aware of any scientific evidence from studies in Sri Lanka or abroad showing that CKDu is caused by glyphosate. The very limited information available on glyphosate in Sri Lanka do not show that levels of glyphosate in drinking water in CKDu affected areas … are above the international standards set for safety.”

The ban had a drastic impact on Sri Lanka’s $1 billion tea industry, responsible for a big share of export income. Lacking alternative herbicides, tea plantations were overrun by weeds and production dropped. In mid-2018, the government removed the glyphosate ban.

There are no quick fixes to complex problems like CKDu, and policymakers should be wary of those advocating any. Socially engaged scientists are to be saluted — as long as they are driven by evidence and debate.

A few years ago, assessing Rachel Carson’s legacy, Harvard biologist Edward O. Wilson gave some useful advice to scientist-activists everywhere: “Scientists should first establish themselves as scientists, with a solid record of peer-reviewed achievement, then speak out in their area of expertise — loudly, if necessary.”