This underperformance, and the subsequent inability of many South American countries to escape the middle-income trap, has been explained by a number of broad but interrelated factors.

The first was their failure to upgrade their economic structures, develop internationally competitive industries and reduce their reliance on primary exports. The second was their ineffectiveness at addressing widening income and social inequalities and the third was the region’s political instability which resulted in more short-term populism than long-term economic thinking.

South America may be geographically distant from Southeast Asia, but there are now many existing and emerging similarities between the two regions.

Like South America, Southeast Asian countries, with the notable exception of Singapore, are struggling to develop the more advanced industries so necessary to transition from simple employment-led economic expansion to more sustainable productivity-led growth.

It is true that there are pockets of manufacturing excellence within the region, but these are geographically concentrated and often not at the scale to be internationally competitive. The region’s manufacturers are instead generally low-order and domestically-orientated, despite numerous but frequently futile efforts to develop more advanced sectors.

In fact, many Southeast Asian countries have experienced premature deindustrialization given their positions in the development cycle. And it may now be too late to reverse this trend. In the same way, South America failed to develop their manufacturing sectors in the face of American and European competition, Southeast Asia’s producers will almost certainly struggle against hypercompetitive Chinese imports.

The fundamental problem is that if Southeast Asia cannot develop more advanced industries, then it will not escape a future in which it specializes in the exports of raw materials, agricultural products, lower-order goods and tourism, while relying on more advanced manufactured imports from the region’s dominant economy just like South America. And if this geographic division of labor and trade emerges, then the long-term consequences will be the same.

Such an outcome is looking increasingly likely, though, because many of the necessary ingredients for such productivity-led economic development are missing across much of the region.

Not only is there a lack of regionally coordinated industrial policies — important if Southeast Asian countries are to develop complementary rather than competitive industrial structures — but there is a widespread reluctance to invest in the necessary human capital. Indonesia, Thailand and the Philippines, for example, all spend significantly less on education, as a proportion of GDP, than Brazil, Argentina and Mexico. 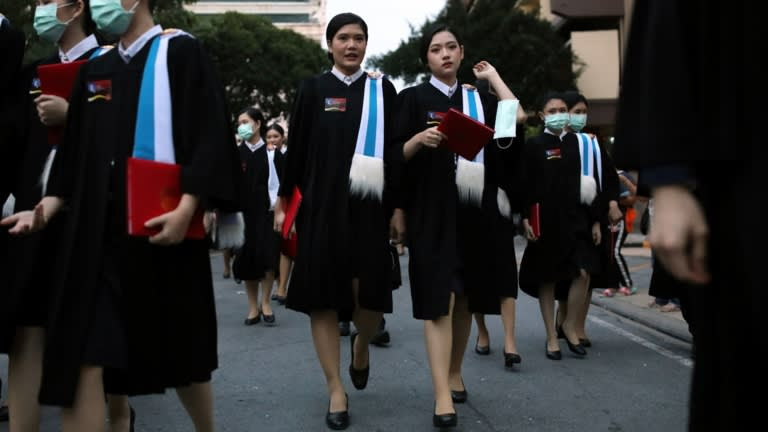 Students leave after their graduation ceremony at Thammasat University in Bangkok in October 2020: Thailand spend significantly less on education as a proportion of GDP.   © Reuters

That feeds through to a lack of innovation and technological advances. This reality may seem at odds with the current excitement over the emergence of various regional internet platforms, which are often presented as examples of Southeast Asia’s advances, but these are the exceptions rather than the general rule.

Over the last three years, Southeast Asian entities secured just 19,300 patent grants, not much more than Australia’s 17,300 over the same period and significantly fewer than South Korea’s 424,600. Furthermore, much of Southeast Asia’s innovation is concentrated in Singapore and, to a lesser extent, Malaysia. There is little evidence that the rest of the region, especially Indonesia, the Philippines and Thailand, have the innovation capabilities required for longer-term growth.

These dynamics will also have a more insidious outcome: widening social and income inequalities. This will not just constrain the region’s economic outlook. It also increases the risk of political instability over time.

Political instability would not be new to Southeast Asia, of course. After all, many countries across the region, Singapore again being the notable exception, are already typified by short-term populism, patronage and weak institutions.

The problem, however, is that the region’s current economic trajectory is likely to make its political environments worse. And, as South America has already demonstrated, political instability is rarely conducive to the longer-term thinking needed to sustain development.

There are, therefore, important lessons for Southeast Asia from South America’s difficulties, especially as the similarities between the two regions are increasing.

The fundamental question is whether the Southeast Asian countries will address their industrial structures, widening inequalities and unstable political environments more successfully than their South American peers.

As of now, the evidence is not promising, especially as certain trends are becoming more entrenched. In the same way South America struggled in the shadow of the U.S., Southeast Asia faces a difficult outlook as China’s economic edge. This is already being reflected in differing economic performances. Indonesia’s GDP per capita, in constant dollar terms, was 87% of China’s in 2000 but just 37% in 2020, while Thailand’s fell from 164% to 61% over the same period.

This is not to say that the region will not achieve economic growth. On current trajectories, though, it will continue to underperform China and will struggle to achieve the necessary economic momentum to escape the middle-income trap over the longer term.

If such a fate is to be avoided, countries across the region need to learn from South America and take action now.