The prospect of any Japan-China military face-off over disputed islands holds even more gravity because the US-Japan mutual defense treaty obligates Washington to defend the islands as if they are American territory.close dialog

Get daily analysis on the historic 2020 US election delivered to your inbox.Sign Me UpNo ThanksBy subscribing you agree to ourprivacy policy.The US has been steadfast in that commitment, as echoed in Schneider’s comments on Monday.In July, US Secretary of State Mike Pompeo included the Senkakus dispute as one of the areas in the Indo-Pacific where he said China was “instigating territorial disputes” as part of a pattern of “bullying” its Asian neighbors.So the huge US and Japanese military presence in the Pacific this week adds visual heft to statements that Tokyo and Washington stand united over the Senkakus and beyond.The fleets include some 9,000 US troops, a US aircraft carrier strike group, more than 100 US military aircraft, more than 37,000 Japanese troops, a flotilla of 20 Japan Maritime Self Defense Force warships, 100 Japanese military planes, plus a frigate from Canada — all focused on landing large forces on islands around Okinawa, 250 miles (400 kilometers) to the east of the Senkakus.Since becoming Japanese Prime Minister in September, Yoshihide Suga has been pushing Japan’s support for a “free and open Indo-Pacific.” He’s overseen Japanese naval deployments to the South China Sea — which Beijing claims almost in its entirety — visiting both Vietnam and Indonesia to strengthen Japanese ties with those countries that also have claims in the vast waterway. Suga has also reaffirmed defense ties with India and Australia, which along with the US and Japan are known as “the Quad.” 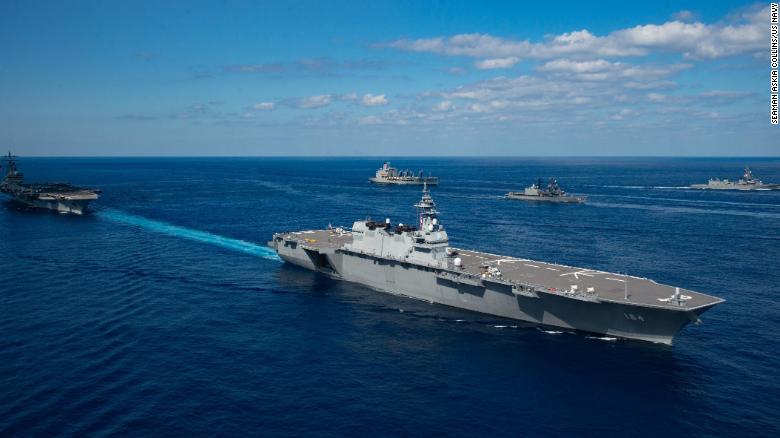 Japan’s helicopter destroyer JS Kaga steams with the aircraft carrier USS Ronald Reagan during exercise Keen Sword 21.While not a formal military alliance like NATO, the Quad is seen by some as a potential counterweight to growing Chinese influence and alleged aggression in Asia-Pacific. The collation has been denounced by Beijing as an anti-China bloc.Naval forces from all four Quad nations will participate in the large-scale Malabar military exercises in the Indian Ocean next month.But first China’s eye will likely be focused on what’s happening with Keen Sword.A statement from the US Pacific Fleet in Hawaii said the US and Japanese forces “will train in a comprehensive scenario designed to exercise the critical capabilities required to support the defense of Japan and respond to a crisis or contingency in the Indo-Pacific region.”The troops “will exercise a wide range of warfighting capabilities and demonstrate the inherent flexibility and capability of the US and Japanese militaries,” the Pacific Fleet statement said.Photos released by the US Navy on Monday showed 16 US, Japanese and Canadian warships sailing in formation in the Philippine Sea as Keen Sword began.

The large-scale exercises have strong “deterrent value” toward China, said Carl Schuster, a former director of operations at the US Pacific Command’s Joint Intelligence Center.”They show (island) seizure is not going to be cheap or unchallenged,” he said.Corey Wallace, an assistant professor focusing on Japanese foreign policy at Kanagawa University, said the exercises are displaying new levels of interoperability between the Japanese and US militaries.

Rare footage shows US patrol of South China Sea 02:56The US will land MV-22 Osprey transport aircraft on Japan’s largest warship, the JS Kaga, said Wallace. And it could be just a glimpse of what the two militaries might do in the future with their stealth fighters.”This speaks to the intensifying nature of the amphibious exercises but also the future possibilities for further cross-decking, perhaps first with US F-35Bs on Japanese ships, and later, possibly Japanese F-35Bs on American amphibious vessels,” Wallace said. “Demonstrating interoperability between the two forces in realistic scenarios is as important, if not more so, than displaying any shiny new hardware.”Meanwhile, with much less fanfare, China’s People’s Liberation Army is in the midst of two sets of military exercises in the Bohai Sea and Yellow Sea, according to a posting on the PLA’s official English language website. The nature of the exercises was not disclosed.Those exercises, scheduled to end on November 10 and October 30, respectively, are just the latest in a busy few months for China’s military, which has recently had as many as five exercises running simultaneously.