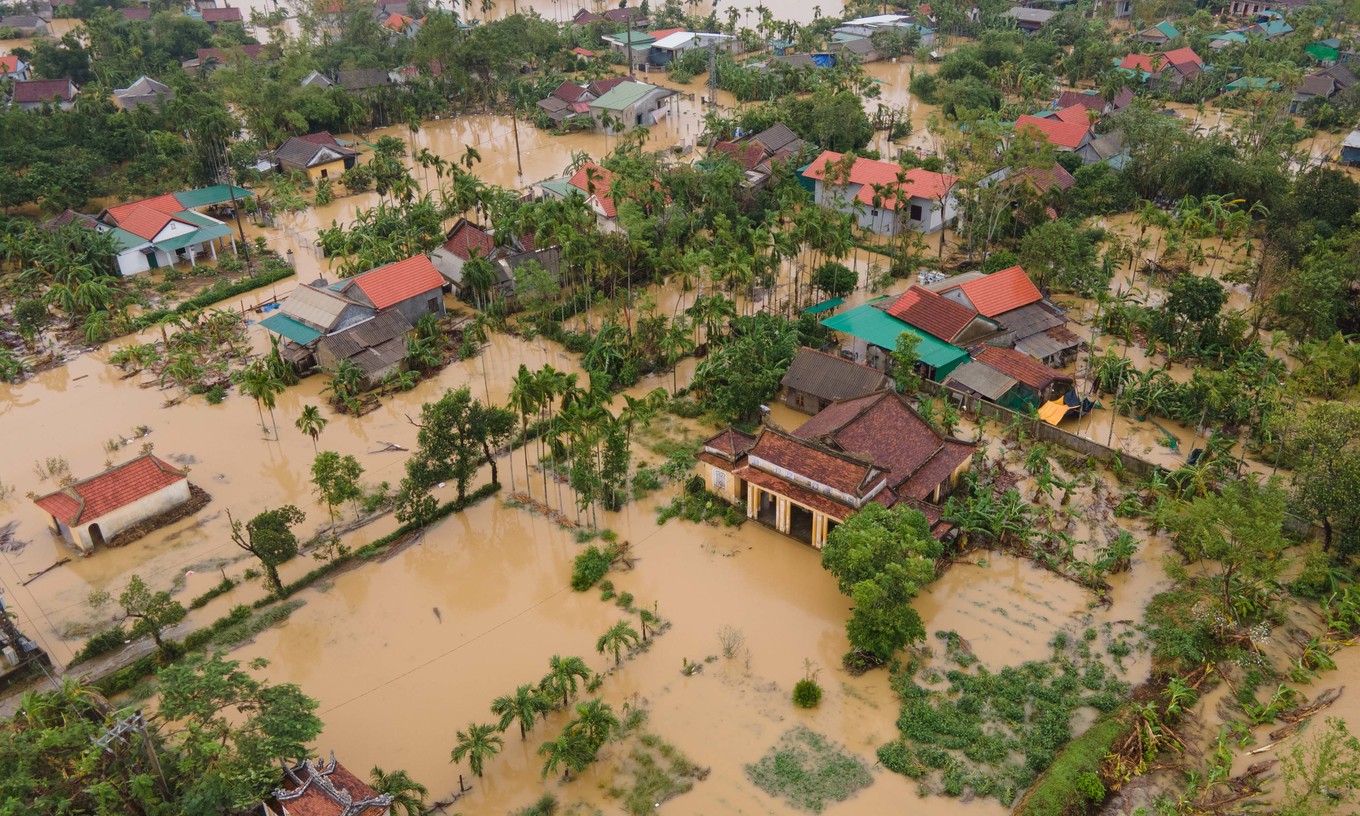 “According to our global assessment of current meteorological conditions, Vietnam is experiencing the worst weather impacts in the world at present,” said Grahame Madge, a spokesman for U.K. Met Office that provides critical weather services and world-leading climate science.

As the compiler of Decree 91 on fighting spam SMS, calls and messages, an official with the Authority for Information Security, Dang Huy Hoang, said he was happy that he could contribute to reducing ‘garbage’ in digital space.

Spam messages, e-mails and calls have been a burning issue for years. How to prevent spam is a topic of discussion at many National Assembly’s sessions.

END_OF_DOCUMENT_TOKEN_TO_BE_REPLACED

Vietnam is making all-out efforts to boost the disbursement of public investment as it seeks to post GDP growth of 3 percent this year amid the global economic downturn triggered by the COVID-19 pandemic.

The Government views public investment as an engine for growth that can offset the impact of the pandemic.

The 10th session of the 14th tenure of the National Assembly kicked off on October 20. It is scheduled to last for nineteen and a half days.

Vietnam moved up one spot to rank 12th out of 26 countries and territories in the 2020 Asia Power Index conducted by the Lowy Institute, an independent think-tank in Australia.

Vietnam’s rank improved thanks to gains in diplomatic influence, in which it was placed 9th, up three places against last year.

A victory for the government could remake one of America’s most recognizable companies and the internet economy that it has helped define.

By David McCabe and Cecilia Kang

WASHINGTON — The Justice Department plans to accuse Google of maintaining an illegal monopoly over search and search advertising in a lawsuit to be filed on Tuesday, the government’s most significant legal challenge to a tech company’s market power in a generation, according to officials at the agency.

In its suit, to be filed in a federal court in Washington, D.C., the agency will accuse Google, a unit of Alphabet, of illegally maintaining its monopoly over search through several exclusive business contracts and agreements that lock out competition, said the officials, who were not authorized to speak on the record. Such contracts include Google’s payment of billions of dollars to Apple to place the Google search engine as the default for iPhones.

The agency will argue that Google, which controls about 80 percent of search queries in the United States, struck agreements with phone makers using Alphabet’s Android operating system to pre-load the search engine on their phones and make it hard for rival search engines to become a replacement. By using contracts to maintain its monopoly, competition and innovation has suffered, the suit with argue.

The suit reflects the pushback against the power of the nation’s largest corporations, and especially technology giants like Google, Amazon, Facebook and Apple. Conservatives like President Trump and liberals like Senator Elizabeth Warren have been highly critical of the concentration of power in a handful of tech behemoths.

Attorney General William P. Barr, who was appointed by Mr. Trump, has played an unusually active role in the investigation. He pushed career Justice Department attorneys to bring the case by the end of September, prompting pushback from lawyers who wanted more time and complained of political influence. Mr. Barr has spoken publicly about the inquiry for months and set tight deadlines for the prosecutors leading the effort.

The lawsuit may stretch on for years and could set off a cascade of other antitrust lawsuits from state attorneys general. About four dozen states and jurisdictions have conducted parallel investigations and are expected to bring separate complaints against the company’s grip on technology for online advertising.

A victory for the government could remake one of America’s most recognizable companies and the internet economy that it has helped define since it was founded by two Stanford University graduate students in 1998.

But Google has long denied accusations of antitrust violations and is expected to fight the government’s efforts by using a global network of lawyers, economists and lobbyists. Alphabet, valued at $1.04 trillion and with cash reserves of $120 billion, has fought similar antitrust lawsuits in Europe.

The company says it has strong competition in the search market, with more people finding information on sites like Amazon. It says its services have been a boon for small businesses.

He Married a Sociopath: MeA Korean Store Owner. A Black Employee. A Tense Neighborhood.My Boss’s Drinking Is Getting Worse. How Do We Intervene?

Google didn’t immediately respond to a request for comment.

The lawsuit comes two weeks after Democratic lawmakers on the House Judiciary Committee released a sprawling report on the tech giants that accused Google of controlling a monopoly over online search and the ads that come up when users enter a query.

“A significant number of entities — spanning major public corporations, small businesses and entrepreneurs — depend on Google for traffic, and no alternate search engine serves as a substitute,” the report said. The lawmakers also accused Apple, Amazon and Facebook of abusing their market power.

The scrutiny reflects how Google has become a dominant player in communications, commerce and media over the last two decades. It controls 90 percent of the market for online searches, according to one estimate. That business is lucrative: Last year, Google brought in $34.3 billion in search revenue in the United States, according to the research firm eMarketer. That figure is expected to grow to $42.5 billion by 2022, the firm said.

The lawsuit is the result of an investigation that has stretched for more than a year. Prosecutors have spoken with Google’s rivals in technology and media, collecting information and documents that could be used to build a case.

Mr. Barr, a former telecom executive who once argued an antitrust case before the Supreme Court, signaled that he would put the tech giants under new scrutiny at his confirmation hearing in early 2019. He said that “a lot of people wonder how such huge behemoths that now exist in Silicon Valley have taken shape under the nose of the antitrust enforcers.”

He put the investigation under the control of his deputy, Jeffrey Rosen, who in turn hired an aide from a major law firm to oversee the case and other technology matters. Mr. Barr’s grip over the investigation tightened when the head of the Justice Department’s antitrust division, Makan Delrahim, recused himself from the investigation because he had lobbied for Google’s acquisition of the ad service DoubleClick in 2007.

Mr. Barr pushed prosecutors to wrap up their inquiries — and decide whether to bring a case — before Election Day. While Justice Department officials are usually tight-lipped about their investigations until a case is filed, Mr. Barr publicly declared his intention to make a decision on the Google matter by the end of the summer. He mentioned the agency’s antitrust investigation when asked about unproven charges that conservative speech is stifled online.

This year, most of the roughly 40 lawyers building the case said they opposed bringing a complaint by Mr. Barr’s Sept. 30 deadline. Some said they would not sign the complaint, and several left the case this summer.

Google last faced serious scrutiny from an American antitrust regulator nearly a decade ago, when the Federal Trade Commission investigated whether it had abused its power over the search market. The agency’s staff recommended bringing charges against the company, according to a memo reported on by The Wall Street Journal. But the agency’s five commissioners voted in 2013 not to bring a case.

Other governments have been more aggressive against the big tech companies. The European Union has brought three antitrust cases against Google in recent years, focused on its search engine, advertising business and Android mobile operating system. Regulators in Britain and Australia are examining the digital advertising market, in inquiries that could ultimately implicate the company.

“It’s the most newsworthy monopolization action brought by the government since the Microsoft case in the late ‘90s,” said Bill Baer, a former chief of the Justice Department’s antitrust division. “It’s significant in that the government believes that a highly successful tech platform has engaged in conduct that maintains its monopoly power unlawfully, and as a result injures consumers and competition.”

Google and its allies will likely criticize the suit as being politically motivated. The Trump administration has attacked Google, which owns YouTube, and other online platform companies, as being slanted against conservative views.

The lawsuit will likely outlast the Trump administration itself. The government’s case against Microsoft took more than a decade to settle.

While it is possible that a new Democratic administration would review the strategy behind the case, some experts said it was unlikely that it would be withdrawn under new leadership.U.S. v. GoogleRead more about the legal battle that has been brewing for more than a year.

David McCabe covers tech policy. He joined The Times from Axios in 2019.

GUANGZHOU, China — Political tensions between the U.S. and China have thrust technology and supply chains into the spotlight and threaten to fracture the internet.