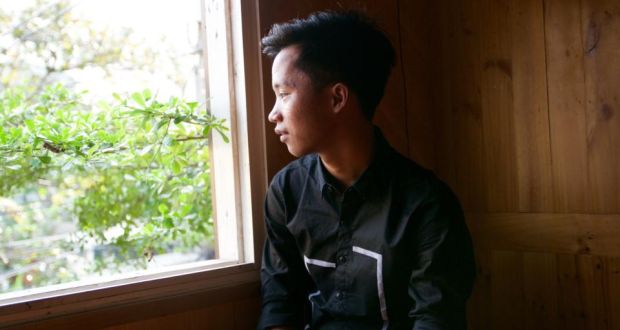 Nguyen Van Thanh worked 17-hour days in a garment factory. He was rescued after a year. Photograph: Adrien le Coärer

irishtimes_A female singer belts out a Vietnamese love song on the radio as a tear rolls down Tran Bao Ngoc’s cheek. Her voice falls to little more than a hush.

“I was lied to about my job. I wanted to leave but at some point, I realised I wasn’t allowed to go. Nobody had to tell me but I knew I was trapped,” says the 22-year-old. “I didn’t know where I was or how to go home.”

Tran, whose name has been changed to protect her privacy, is from a fishing family in a remote part of Hue province in central Vietnam. She was 12 when two traffickers from her region posing as a couple offered her a job as an assistant in a clothing shop in Ho Chi Minh City for a salary of 3 million Vietnamese dong (now €112) per year.

“My family couldn’t afford my school fees and I wanted to help them,” she explains. “This seemed like a good opportunity.”

Instead, Tran was trafficked to a garment factory on the city’s outskirts, where she was forced to work from 7am to midnight with only short breaks. She slept in a small room with a dozen other girls and women and subsisted off plates of rice and the occasional fish.

“I was exhausted from the long hours,” she said. “My boss would shout at me when I didn’t sew fast enough but I didn’t have the energy.”

Tran was rescued six months later with other children from her village in a raid by the Blue Dragon Children’s Foundation, a non-profit organisation working to rehabilitate trafficking victims. She was never paid for her work.

Her story is similar to that of thousands of children across Vietnam. Lured with the promise of employment in cities like Ho Chi Minh and Hanoi, minors as young as 11 are enslaved, working long hours with little or no pay.

According to the International Labour Organisation, an estimated 1.75 million Vietnamese children were employed in 2012, the equivalent of one in 10 children. About one-third of the child labourers are forced to work more than 42 hours each week and don’t attend school.

Vietnam, meanwhile, has enjoyed one of the fastest GDP per capita growth rates in the past three decades, and t. The World Bank heralded the country as a development success story. With treaties such as the EU-Vietnam Free Trade Agreement and the Trans-Pacific Partnership, the Vietnamese government is actively pursuing international accords to spur the country’s development forward. But at what cost to its people?

Nguyen Van Thanh, whose name has been changed to protect his privacy, grew up next to one of the lakes that dot Hue’s countryside. The son of a fisherman, he is the youngest of eight siblings.

“I loved to go fishing and play football with my friends. I scored a lot of goals,” remembers the 20-year-old, sipping an iced coffee. “Those were good times.”

A neighbour offered Nguyen and his brother work at a factory in Ho Chi Minh City for 700,000 Vietnamese dong (€26.20) per month. He and his brother took a bus on the day-long journey south.

When the brothers arrived, they immediately began arranging clothes in plastic covers for 17 hours each day. They made their beds under the sewing machines that lined the factory. Workers were given only short breaks to eat modest meals of tofu, meat and rice before rejoining the assembly line.

“The work was very hard and my boss wasn’t a nice man, but I wasn’t angry at my parents because I knew they were poor,” he says.

Nguyen was rescued a year later by Blue Dragon, though his 18-year-old brother decided to stay behind in the factory. His family only received part of his salary.

According to Michael Brosowski, founder of Blue Dragon, traffickers target children who come from rural and remote provinces, such as Thura Thien-Hue or Dien Bien, making it more difficult to escape. Recruiters are usually from the same region as their victims, so they are able to gain their parents’ trust. It is also a common strategy to use women, who are considered less threatening than men, and to promise an education for minors.

“The parents find themselves in desperate situations, sometimes with food shortages and here are these traffickers offering hope so they send these kids to work,” Brosowski explains from his office in Hanoi.

“The traffickers know that if the kids escape from the factory, going back home is just about impossible because they are from far away. It is also particularly cruel when the kids are from ethnic minority backgrounds and can’t speak fluent Vietnamese,” he says.

Le Vinh, whose name has been changed to protect his privacy, remembers his own rescue from another garment factory in Ho Chi Minh City. The son of a rice farmer, the 19-year-old left his village with a friend at 14. After a year of unpaid work sewing clothes, a team of social workers called him using a colleague’s phone to inform him of a sting operation to bring him and five other enslaved children home.

“I was so happy when I left that factory. It wasn’t a job – it was like I belonged to my boss,” he says.

Non-profit organisations such as Blue Dragon, and government agencies, are working together to identify factories suspected of using child labour. Planning a rescue takes months before it is executed.

While Brosowski and his team normally lead the search, it is the police who now carry out the raid instead of Blue Dragon, forcing their way on to the property.

“It is a good sign for Vietnam because it shouldn’t be up to a foreign non-governmental organisation to do all of this. It shows the police don’t accept this crime [and are] putting their time and resources into solving these cases,” he says.

Brosowski is careful not to reveal too many details of a typical mission, but he says the team works diligently through different methods to identify factories where children are being held. Potential locations are scouted in advance and families are notified about the plan. If possible, the rescuers try to reach out to the children to tell them details about the escape.

Factory owners will often go to incredible lengths to prevent the children from being rescued. They can be aggressive and refuse to hand over the minors for whom they paid hefty sums to traffickers. Brosowski and the police refuse to pay owners for the children.

Despite progress being made, factory owners and traffickers aren’t being prosecuted, in spite of new laws introduced in 2012 and again in 2015 to increase the penalties for using child labour, including an increase in the maximum prison sentence from three to seven years.

“There hasn’t been a prosecution but I’d like there to be. I think it would get the message out that child trafficking and forced labour isn’t tolerated anymore even if factories are slowly abandoning the practice,” he says.

Once the elation of being home subsides, victims have to contend with the psychological trauma of being enslaved, impacting on their ability to return to their former lives. Tran, Nguyen and Le all struggled to return to school and rejoin their communities once they were freed.

“My classmates tormented me when I got home. I was the oldest student in grade 8 and my old friends told me I was stupid for falling behind. I felt it was my fault for what had happened to me and my grades were bad,” says Le.

He needed the help of a social worker before he was able to feel comfortable again in his community. By providing basic therapy and life coaching, the care worker helped Le return to some semblance of normal. Now he is studying to be a mechanic.

“I had to accept my past and I learned that children are too young to work because they need to go to school, spend time with their family and develop,” he explains. “I only saw my family once in the year I was gone and we were all different when I came home.”

Tran still bears the invisible scars of being forced to work. She can’t discuss her past without breaking down in tears and she still has nightmares. She moved to Hue, the capital of its namesake province, for a fresh start.

“Here I can be who I want to be. I am an art student and my goal is to become a famous fashion designer,” she explains. “At home, I can’t escape my past.”

The young woman hopes other children in Vietnam and elsewhere won’t be forced to work. Instead, she works to promote the importance of education to lift them out of poverty.

“Before going to Ho Chi Minh City, I didn’t care about my future. After my rescue, I realised that school was the only way I would be able to make a better life for myself and my country,” she says.

* This article was supported by a grant from the Simon Cumbers Media Fund.