Donald Trump called for the deportation of a Chinese dissident living in the US, after receiving a request from Beijing hand-delivered by a casino owner with business interests in China, according to a US report.

The Wall Street Journal described a Chinese government attempt to put pressure on Guo Wengui, a real estate tycoon living in exile in New York, to halt his allegations of corruption in high places in China. 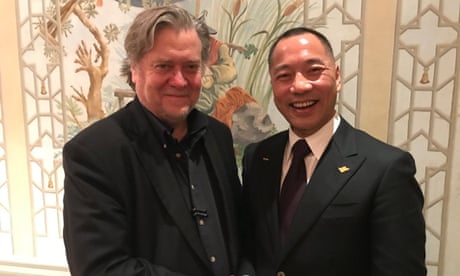 A group of officials from China’s ministry of state security, who entered the US on visas that did not allow them to conduct official business, visited Guo in his New York apartment in May, and used veiled threats in an attempt to persuade Guo to stop his accusatory tweets, which have a wide following in China, and return home. Guo shrugged off the pressure and made a recording of his conversation with the officials, part of which he posted online.

After that visit, FBI agents confronted the Chinese officials at New York’s Pennsylvania Station. The Chinese visitors first claimed to be cultural diplomats and then admitted they were security officials. The agents warned them they were violating the terms of their visa and told them to leave the country.

However, two days later, just before leaving the country, the Chinese officials paid a second visit to Guo, triggering a debate within the administration over whether they should be arrested. FBI agents were posted at John F Kennedy airport ready to carry out the arrests before the officials boarded their flight, but they were not made, after the state department argued it could trigger a diplomatic crisis.

Guo has filed an application for political asylum in the US, which is pending. But according to the Journal’s account, Trump called for Guo’s deportation in a discussion on policy towards China, describing him as a “criminal” at an Oval Office policy meeting in June, on the basis of a letter from Beijing accusing him of serious crimes.

The report said the letter had been hand-delivered to him at a private dinner by Steve Wynn, a Las Vegas casino magnate and Republican National Committee finance chairman with interests in the Chinese gambling enclave of Macau, for which Wynn relies on Beijing for licensing.

The marketing director for Wynn Resorts Ltd, Michael Weaver, told the Journal in a written statement: “[T]hat report regarding Mr Wynn is false. Beyond that, he doesn’t have any comment.”

Weaver did not respond to a request for comment from the Guardian on what part of the story was false and whether Wynn had ever delivered a letter from the Chinese government to Trump.

The Journal report said that aides tried to persuade Trump out of going ahead with Guo’s deportation, noting he was a member of the president’s Mar-a-Lago club in Florida. The aides later ensured that the deportation would not go ahead.

There was no immediate response from the White House or the state department to a request to comment on the report. A state department representative told the Journal: “Decisions on these kinds of matters are based on interagency consensus.”

A justice department representative said: “It is a criminal offense for an individual, other than a diplomatic or consular officer or attache, to act in the United States as an agent of a foreign power without prior notification to the attorney general.”