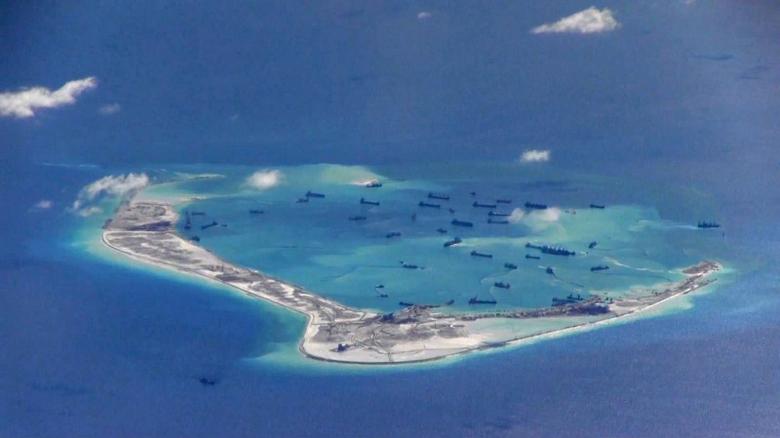 Chinese dredging vessels are purportedly seen in the waters around Mischief Reef in the disputed Spratly Islands in the South China Sea in this still image from video taken by a P-8A Poseidon surveillance aircraft provided by the United States Navy May 21, 2015. U.S….

Singapore’s ambassador to China on Tuesday accused a major state-run Chinese newspaper of fabricating a report about Singapore’s position on the South China Sea, but the paper stuck by its story.

The Global Times said on Sept. 21 that at a summit of the Non-Aligned Movement in Venezuela, Singapore had raised the issue of the disputed waterway and an international tribunal’s ruling in favor of the Philippines in a case it lodged against Chinese claims.

The influential tabloid, published by the ruling Communist Party’s official People’s Daily, said Singapore’s attempt was foiled by the opposition of “many” other countries.

The paper cited an unidentified “person in the know”.

Stanley Loh, Singapore’s ambassador in Beijing, said in the letter to the paper’s editor in chief Hu Xijin that the actions and words attributed to Singapore in the article were “false and unfounded”.

“Contrary to the claim fabricated by the Global Times, the Singapore delegation did not raise the South China Sea or the tribunal ruling at the NAM Summit,” he said.

“We are disappointed that an established newspaper published this irresponsible report replete with fabrications and unfounded allegations with no regard for the facts.”

Hu, in a statement in response carried on the paper’s official microblog, said he stood by the story and added that its source was “serious and reliable” and the report accurate, so he could not accept the ambassador’s accusations.

While not being a party to the South China Sea dispute, Singapore had taken sides with the Philippines and Vietnam, and allowed U.S. air force jets to be based in Singapore “which everyone knows are aimed at China”, Hu added.

China’s Foreign Ministry did not directly comment on the spat between Singapore and the paper, with a spokesman saying only that they had “noted” the reports and that the two countries should understand and respect each other’s core interests.

China claims almost all of the South China Sea, through which ships carrying about $5 trillion in trade pass every year. Brunei, Malaysia, the Philippines, Taiwan and Vietnam also have claims in the sea, which is also believed to be rich in energy resources and fish stocks.

In July, an arbitration court in the Hague said China’s claims to the waterway were invalid, after a case was brought by the Philippines. Beijing has refused to recognize the ruling.