U.S. chief of naval operations Admiral John Richardson told Reuters on March 19 that the United States was monitoring increased Chinese activity around Scarborough Shoal. He warned, “I think we see some surface ship activity … survey type of activity … That’s an area of concern … a next possible area of reclamation.”

Satellite imagery from March 24 shows no Chinese dredging or construction activity at Scarborough Shoal. The only vessels present were a Chinese civilian ship anchored within the mouth of the lagoon, which has been typical for several years, and two Filipino trimaran-type fishing ships outside the shoal (see images below). But that does not mean that Chinese ships have not performed surveys in preparation for reclamation, as Admiral Richardson suggested.

Given that Beijing is expected to lose at least part of the case that Manila has brought against it in the Permanent Court of Arbitration, China might take action to demonstrate that it will not be constrained by the court’s decision. Potential escalations include re-imposing a blockade of Filipino troops stationed at Second Thomas Shoal, deploying military assets to the Spratly Islands, or announcing an air defense identification zone over the South China Sea—but undertaking reclamation work at Scarborough Shoal would be particularly concerning.

Scarborough Shoal lies about 120 nautical miles from the main Philippine island of Luzon and 185 nautical miles from Manila. It is situated in an otherwise empty area of the South China Sea more than 250 nautical miles from each of the region’s two disputed island groups, the Paracels to the northwest and the Spratlys to the southwest. Were China to undertake reclamation at Scarborough, it would allow the Chinese military to maintain a presence throughout the South China Sea and even extend its reach over parts of the Philippine home islands. That would have enormous strategic implications for both the Philippines and the United States, which just negotiated U.S. access to five Philippine bases under the Enhanced Defense Cooperation Agreement.

Chinese land reclamation at Scarborough Shoal would present the Philippines and the United States with multiple challenges. From a security perspective, it would undermine perceptions of U.S. willingness to uphold regional security. This is particularly true because the Philippines lost access to Scarborough in 2012 after a failed U.S. effort to negotiate a mutual Chinese and Philippine withdrawal. An airfield or port at Scarborough would strengthen Chinese military capabilities in and around the South China Sea, as well as complicate U.S., ally, and partner planning for a crisis.

From a diplomatic perspective, Scarborough reclamation might also be the final nail in the coffin for ASEAN’s stuttering efforts to diplomatically manage regional tensions. In the 2002 Declaration on the Conduct of Parties in the South China Sea, the ASEAN states and China explicitly agreed to refrain from only one thing: “inhabiting on the presently uninhabited islands, reefs, shoals, cays, and other features.” Reclamation at Scarborough would violate that cardinal rule; it would be a signal to the region that Beijing’s negotiations with ASEAN were a smokescreen—one which it no longer needs.

Although Washington and Manila face constraints in responding to this type of “grey zone” tactic—in which China seeks to change the status quo without overt use of force, often employing civilian or paramilitary vessels—a coordinated three-part strategy could potentially deter reclamation. The security, environmental, and diplomatic costs of reclamation at Scarborough necessitate such a response.

The first step in countering Chinese reclamation is to ensure that Washington and Manila are sharing intelligence on potential Chinese actions. China’s preference has been to take advantage of regional states’ poor maritime domain awareness capabilities by presenting them with faits accomplis. Admiral Richardson’s statement to Reuters indicates that the United States is keeping a close eye on Scarborough Shoal, but statements from Philippine officials suggest they might not be briefed on U.S. intelligence. Both sides must not only collect intelligence, but share that information in order to response appropriately at the first sign of imminent reclamation.

The second key to a successful deterrence posture needs to be clearly communicated beforehand: the United States should state publicly that it will consider itself bound to intervene if Philippine troops or ships are attacked at Scarborough Shoal or other areas of the South China Sea. Article V of the U.S.-Philippines defense treaty commits the United States to respond to any attack on Philippine “armed forces, public vessels or aircraft in the Pacific.” That means the United States can, and should, remain neutral on the legitimacy of Manila’s territorial claims while still clarifying that any unprovoked attack on Philippine forces in disputed waters or territory would fall within the scope of the treaty commitment.

Filipinos have been looking for that kind of explicit commitment from Washington for several years, and the U.S. government’s refusal to give it has created an undercurrent of skepticism in the Philippines about just how “ironclad” the American commitment really is. When he visits Manila in April, Secretary of Defense Ashton Carter will have an opportunity to put those fears to rest. Doing so, and being willing to follow through if that commitment is challenged, is key to bolstering Philippine resolve to confront China in grey zone incidents, and to deterring China from escalating incidents into open conflict.

The final and most difficult step to blocking Chinese reclamation at Scarborough Shoal will be having Philippine assets prepared to intervene at short notice. Despite the severe gaps in its naval and coast guard capabilities, the Philippines, not the United States, must take the lead in confronting Chinese activities at Scarborough. The shoal includes several rocks that entitle it to a territorial sea. Sending a U.S. naval vessel into the territorial sea of a disputed feature in the absence of any use of force by China would violate (or at least seriously muddy) the very international laws and norms that the United States is looking to uphold. Even if successful in blocking Chinese reclamation, such a U.S. operation would be a Pyrrhic victory.

Instead, the best chance to stop land reclamation at Scarborough Shoal would be through the use of Philippine assets, with the United States just outside the territorial sea. The Philippines should be prepared to send assets—likely several smaller coast guard vessels and at least one of the Hamilton-class cutters its navy received from the United States—to prevent Chinese reclamation at the shoal. Doing so would not require overt aggression from the Philippine ships—blocking the entrance to the shoal or maneuvering to interfere with the operation of dredging ships could make a reclamation operation prohibitively difficult. In the meantime, U.S. Navy assets would need to remain in position over the horizon to signal that they would be prepared to intervene should China attack Philippine forces.

Despite its bullying and coercion, Beijing has been hesitant to risk a military clash, especially with the United States, but also with its neighbors. The key to a successful response, as shown by Vietnam during the Haiyang Shiyou 981 standoff or the Philippines when it ran a Chinese blockade of Second Thomas Shoal in early 2014, has been to force Beijing to choose between achieving its aims with force or backing off and trying again another day. Featured Imagery: Scarborough Shoal – March 24, 2016. 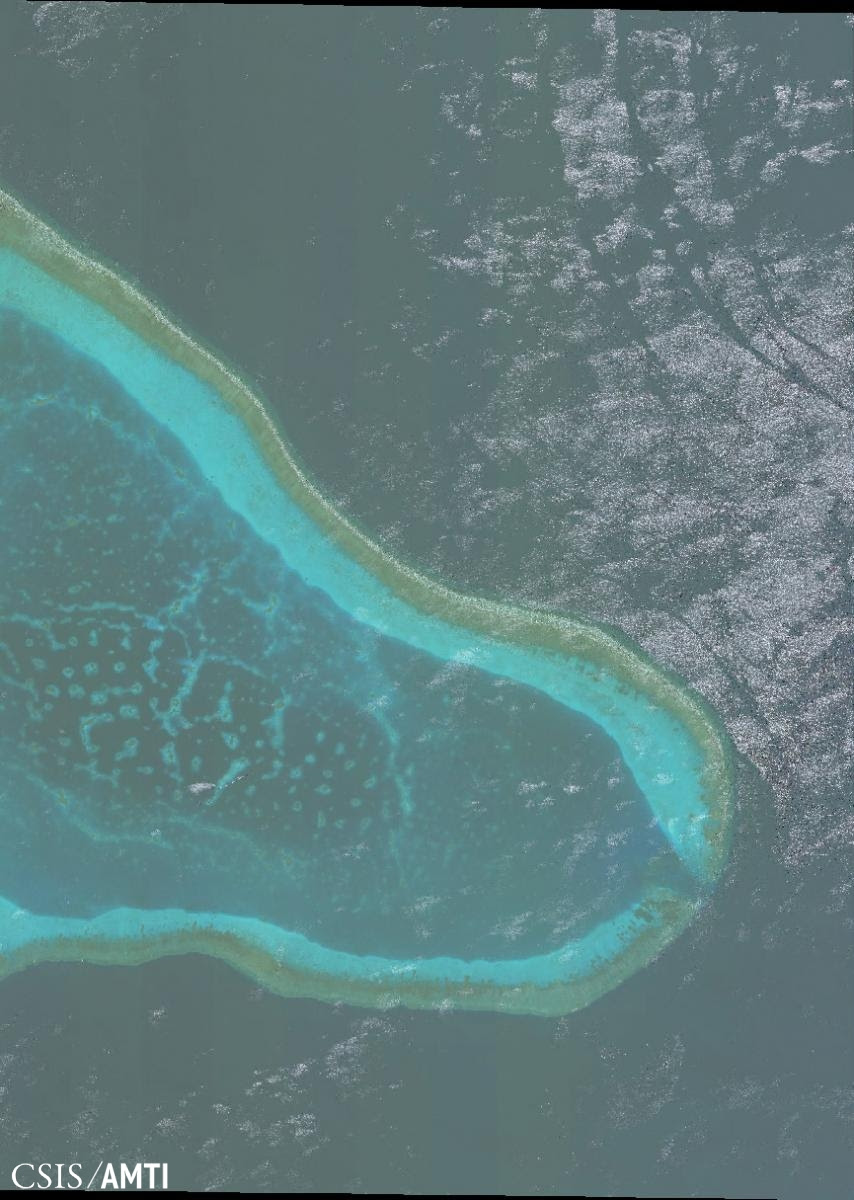 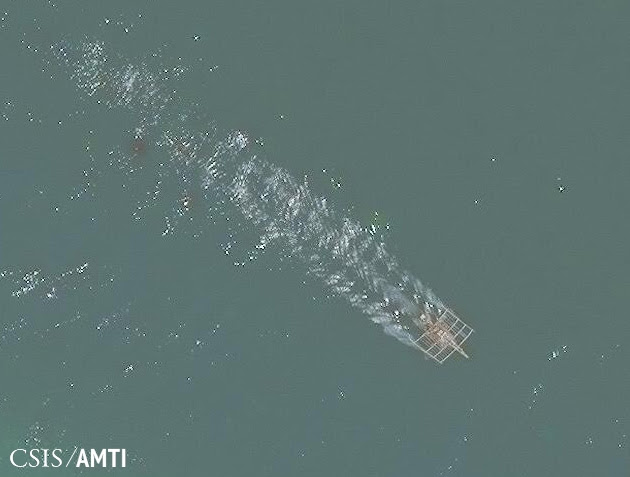 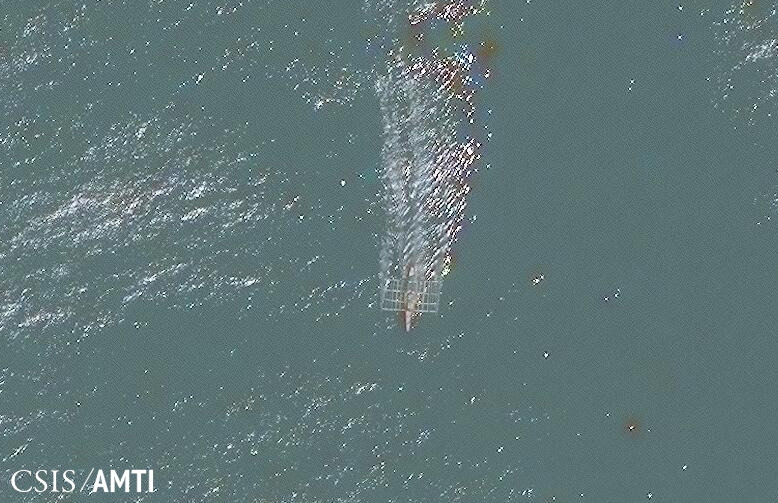