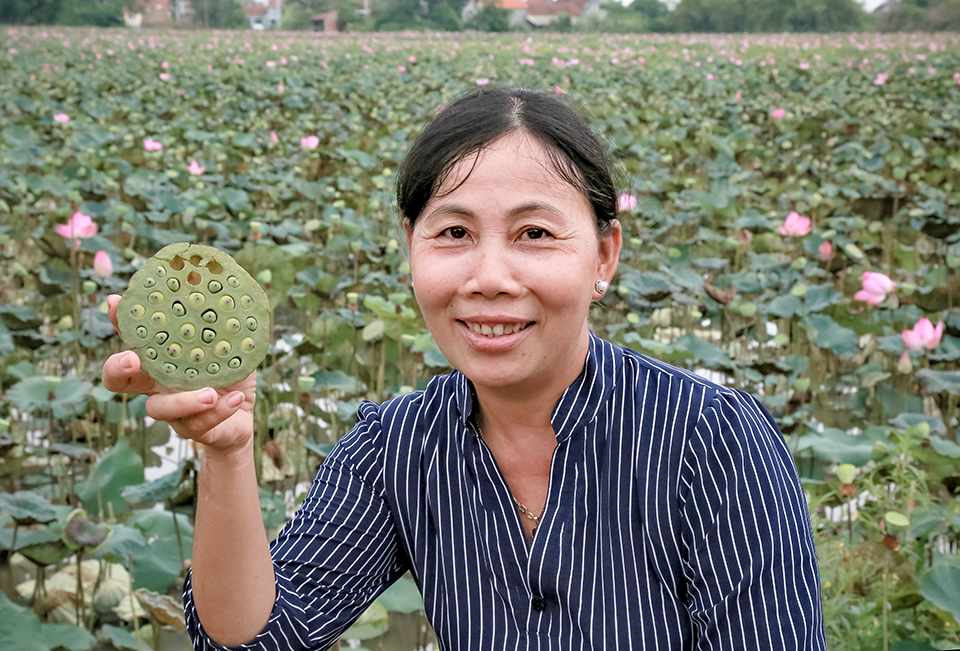 “The weather has become more extreme and erratic. Storms, heavy rains and floods are more frequent and unpredictable. My commune is always at high risk of flooding. Almost every year, the commune suffers at least one severe flood that heavily damages our rice crops. I knew that sooner or later my family must find a new livelihood,” Linh explained. 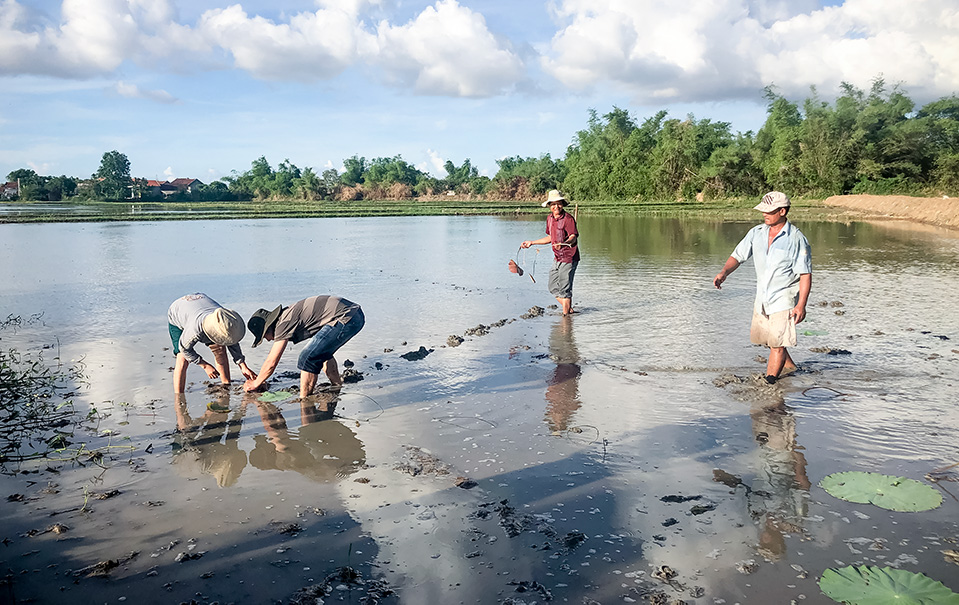 When Linh heard about a new project on livelihoods coming to her village, she immediately persuaded her husband and her neighbours to join. Besides Linh’s family, 25 households were selected to join the project. With UN Women’s support, the famers were trained in new skills to plant lotus following the standards of VietGAP (Vietnamese Good Agricultural Practices). They also learned about the market, business and skills to build a strong brand for their products. 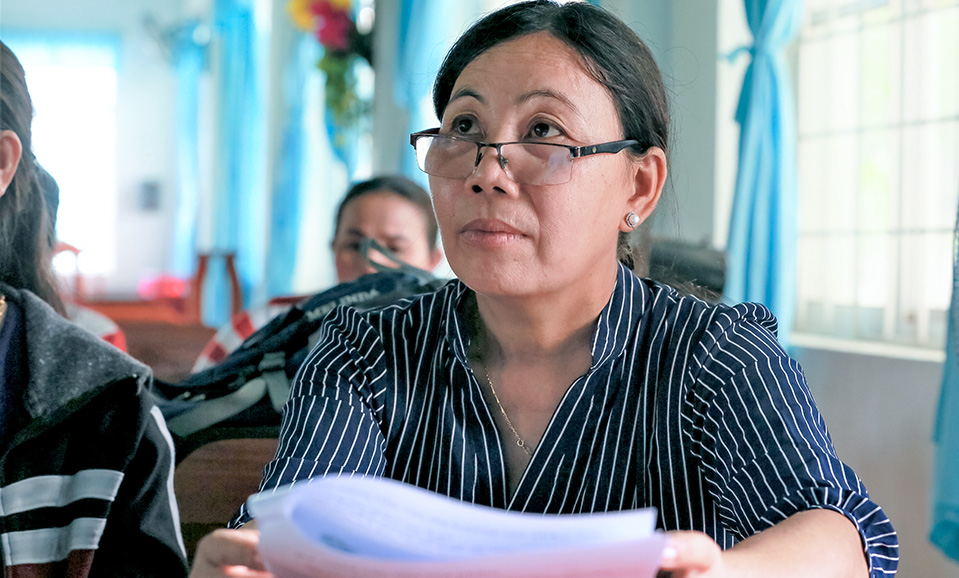 After four months, Linh and her peers have achieved financial success, the income from the lotus fields is six times more than rice.

“We can sell the lotus seeds and other products, for example the lotus leaves and roots, for a higher price. Some local enterprises promise to buy all the lotus products from our field,” Linh explained.

Mrs. Dang Thi Hong Nga, Chairperson of the Phu Yen Women’s Union said, “The project not only brings new opportunities for local women to increase their resilience to disasters in a sustainable way, more importantly, they can fully participate in the decision-making process throughout the project implementation. Before this project, we tried different livelihood models but did not have this level of success. In September, the lotus fields became the first lotus model in Phu Yen to receive the VietGAP certificate, which will open more opportunities for rural women to earn higher incomes.” 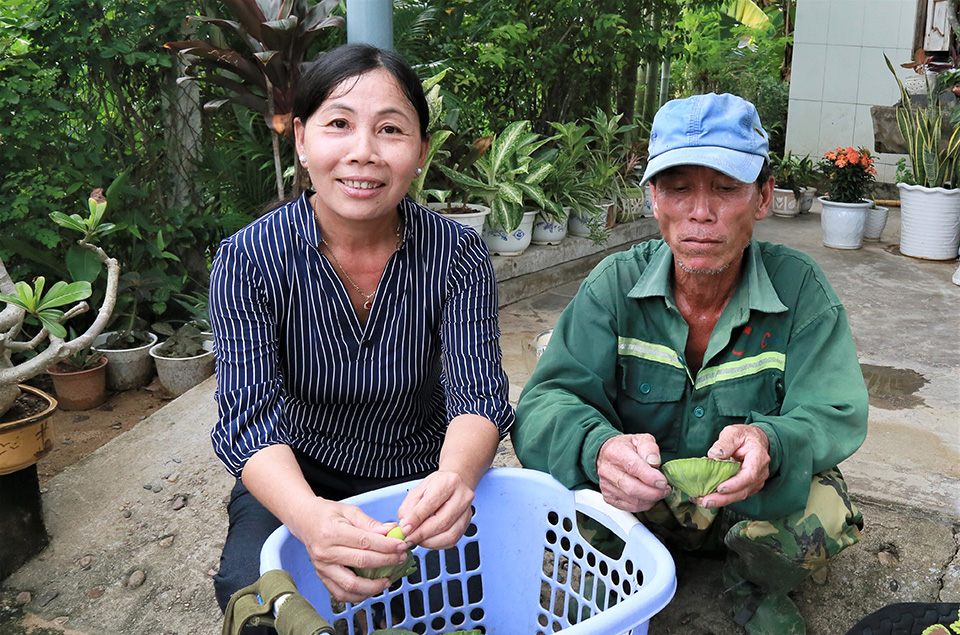 Viet Nam is one of the most vulnerable countries to, and most affected by, climate change and disasters. It is ranked ninth according to the Global Climate Risk Index 2019. In Viet Nam, 65.76 per cent of the population live in rural areas. Agriculture employs of about half of the labour force and is by far the main source of livelihoods for ethnic minorities. Most rural women are engaged in smallholder farming and subsistence agriculture with less access to information, resources, credit, markets, vocational training and extension services, especially those from poor and ethnic minority households. This limits their ability to adapt and build resilience to climate change. 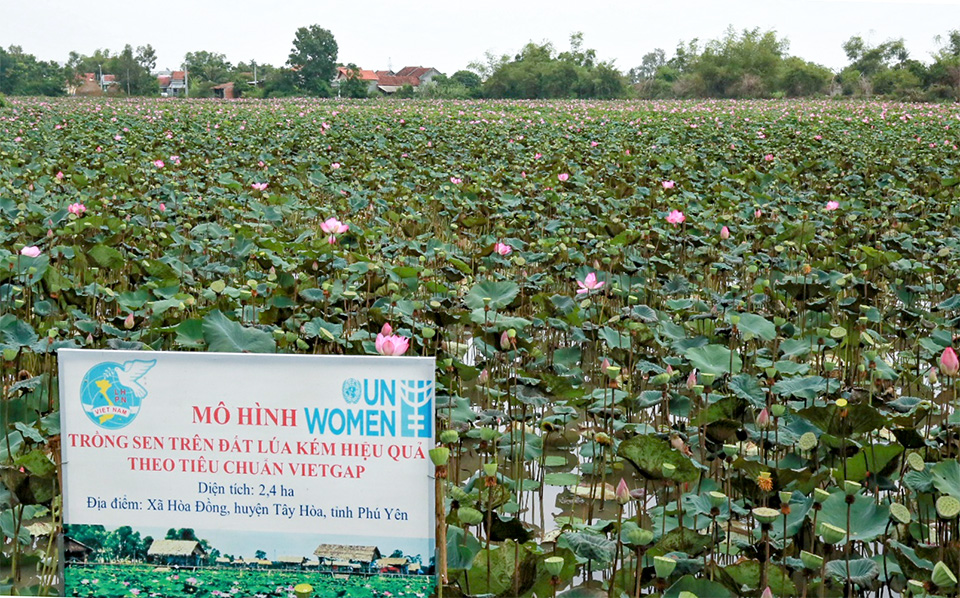 Elisa Fernandez, UN Women Head of Office in Viet Nam, said that local women in the areas affected by climate change could contribute effectively to efforts to adapt to climate change and enhance resilience and sustainable development if they receive adequate support to improve their livelihoods and capacity.

“Gender equality is therefore regarded as a basis for effective disaster response and climate change adaptation activities, and also a mechanism for achieving the Sustainable Development Goals,” Fernandez affirmed.

The project, “Strengthening women’s livelihoods and participation for greater resilience to disasters and climate change in Viet Nam,” has been implemented in three provinces, including Lao Cai, Quang Nam and Phu Yen, directly impacting around 400 people. The project is financed through the generous contributions of the Chanel Foundation for a three-year period (2018-2021).