It’s been nearly a month since Hà and Thông decided to replace their stilt house’s cement roof with traditional and more eco-friendly palm leaves.

Husband Hà and wife Thông form an ethnic Tày household in Bản Liền Commune of Bắc Hà District in northwest Lào Cai Province. When people refer to them they call out their names together Hà-Thông.

It is late in the afternoon twilight, and two rows of Tày women clad in traditional black tunics with colourful headscarves and waistbands are tying leaves to bamboo bars on the roof under the watchful eye of a master roof-maker.

In the front yard, another woman, Vàng thị Phóng, 24, is tying a pile of leaves for three men to swing up to the roof. The working process is going well when visitors from a neighbouring house stop by.

It does not stop the work, the passers-by say hello and continue going about their business. The images of these hardworking women, set against the sky, form a powerful positive scene, showing the decisive role of women in family and community life. 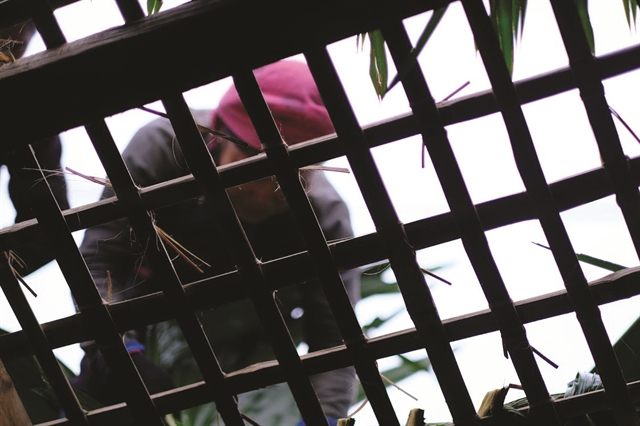 In Bản Liền, a hilly commune of Tày people in Bắc Hà, the women also do hard farm work alongside the men. They make the terraced fields, plant rice and tea, and tend to the family orchards. They raise chickens, ducks, geese, dogs, buffaloes and horses. They also plant cinnamon in the hills for a secure future, all while giving birth to children and taking care of ailing parents.

Since Bản Liền awoke like a sleeping beauty to open up and receive homestay guests, the people have made room for visitors to sleep on their stilt-house floors, learn to cook new dishes and how to speak English, and, in the springtime, practise their traditional games and dances, which they will perform for guests.

“Today we have come to help Hà-Thông to roof their house,” says Phóng, a local mother of two and head of the village music and dance group. “When the men are not at home, we women have to roof the house. In Bản Liền, it’s always women who climb onto the top of our house and fix the roof.”

A popular Vietnamese saying goes “Con không cha như nhà không nóc“ (a child without a father, is like a house without a roof). So, it’s notable, perhaps even a touch ironic, that it is not the men but the women who are hard at work fixing the roof.

“It’s been more than a month since we decided to change our roof with palm leaves,” says Thông, who owns the house with her husband. “This new roof shall be more eco-friendly, warm in winter and cool in summer, and it’s supposed to last for 20 years.”

It is a tradition of the Tày women in Bản Liền that a month or two before a family gets a new roof, the village shaman should be consulted on what days are most auspicious to the change and have a housewarming party. And before any construction, the woman of the house must be consulted. A house cannot be fixed without a mother’s permission.

In recent years, the women in Bản Liền have formed their own women’s power network, where they can share their homes and farm work. And now they work with a Vietnamese NGO, the Centre for Rural Economic Development (CRED), which helps connect them to a wider network, teaching them how to turn their homes into homestays for international travellers.

The women have become busier, yet they laugh more, feel more confident about themselves and are enjoying themselves more as they can sing and dance and show their traditional values to people from all over the world.

Despite the complex rules regarding building or fixing a house, there is no rule for who should arrange the leaves on the roof. The young tend to like it more; they like to walk up to the roof where they can look around, learn the job, and later teach others how to do it.

When the work is finished, the owner prepares a food tray to invite everyone who helped. The chief of the clan prepares a ceremony, and they invite all families with married daughters, and the uncles from the mother’s side of family bring sticky rice cakes and black glutinous rice dumplings to contribute.

Since March 2019, a community-based project to enhance the economic and social status of ethnic minority women through community-based tourism (CBT) in Bắc Hà has started to take root in the mountainous district.

CRED has helped to form six co-operatives on tourism with 21 groups of different crafts set up in seven communes and one township, with 690 people from 271 households. Of these, 331 are women and 95 per cent from minority groups. All CBT groups have women on the management boards.

More than 800 men and women (52 per cent) have also been trained in on-the-spot training workshops, with courses on advanced marketing and hosting guests for people providing tourism services.

The total turnover of these groups in the CBT project reached VNĐ600 million from June 2020 to March 2021, despite the fact it coincided with the coronavirus pandemic.

“The most visible results the project has brought about so far, is to see minority women taking more roles in social activities,” says Thái Huyền Nga, project manager. “The women are now more confident speaking up in public. Other social activities that were associated with men only, now can be seen being performed by women. Their voices have been heard and used for community purposes.”

The project has also held conferences and events to raise local people’s awareness on giving women authority and power, and gender equality, with a total of 80 per cent of local women taking part.

About 10,000 residents in 137 hamlets and communities of five communes and a township have gained access to information on gender equality, domestic violence, female trafficking and child labour through more than 1,000 radio broadcasts in Vietnamese and ethnic Mông languages.

The ongoing projects have helped more women get access to community cultural activities. At the beginning of the project, only 50 per cent of local women’s opinions were listened to and considered when making an important family decision, and now it is 80 per cent. More than 95 per cent of the men agreed to let the women — their wives, sisters and daughters — participate in tourism activities.

Over the past two-and-a-half years, 23 tourism companies, both inbound and local, have participated in designing tourism products forBắc Hà District. More than 40,000 visitors came to project destinations that were unknown to domestic tourists before 2019. The project has completed a Bắc Hà Tourism website, which reached out to 100,000 visitors on multimedia platforms.

It has also trained communal cultural officers, improving their understanding of preserving local traditions and customs for tourism.

LABOUR OF LOVE: Two men weave bamboo back-baskets, between them sits the wife of the man on the right. She’s suffered from a stroke and is partly paralysed in one leg, but she is well-taken care of. Photo Huy Phạm

So much work has been done during a brief period of time. Even as the world is fighting this ongoing pandemic, up in the mountains of Bắc Hà, people are tending their terraced fields, washing their bedding and mosquito nets, and learning to manage household micro-economics. The women here are becoming more empowered.

All households involved have been working hard to join forces. As for Hà-Thông, the young couple wants to preserve their traditional Tày home with a palm leaf roof and give their visiting guests a warm welcome in winter and a cool breeze in summer.

Through their hard work and tireless industry, the future looks bright for the Tày women of Bản Liền. They are fixing the roof while the sun is shining. VNS