Christmas light shipments to the US from Vietnam have more than doubled this year, while those from China have plunged.

In living rooms across the U.S. and the world, Christmas lights this year tell a complicated trade-war tale that stretches all the way to Vietnam.

For many years the holiday lights were produced almost solely in China, but increased U.S. tariffs on Chinese goods pushed many buyers to source the goods elsewhere. One country that’s come out a clear winner is Vietnam: Sea-borne shipments of Christmas lights from Vietnam to the U.S. more than doubled in the first 10 months of the year from the same period in 2018, according to U.S. customs data. At the same time, American imports of the lights from China fell 49%.

A deeper look at the data and discussions with trade experts and businesses reveal a complex story.

Christmas lights are following a pattern that’s becoming familiar up and down the U.S. tariff lists: Chinese suppliers are finding ways to ditch the “Made in China” label to evade penalties, using neighboring countries like Vietnam to transport goods across borders, relabel them and ship them to the U.S.

There’s no doubt Vietnam is attracting legitimate foreign investment and manufacturing business — and had been doing so well before President Donald Trump began shaking up global supply chains. However, the trade war has increased the risk of illegal goods trafficking, putting Vietnam under the spotlight.

The Chinese “are very good at churning out low value and high volumes with a certain amount of skill that can’t easily be moved or replicated,” said Deborah Elms, executive director of the Asian Trade Centre in Singapore. Businesses have “huge incentives” to move items in a different way to avoid hefty tariffs that can eclipse profit margins, she said. 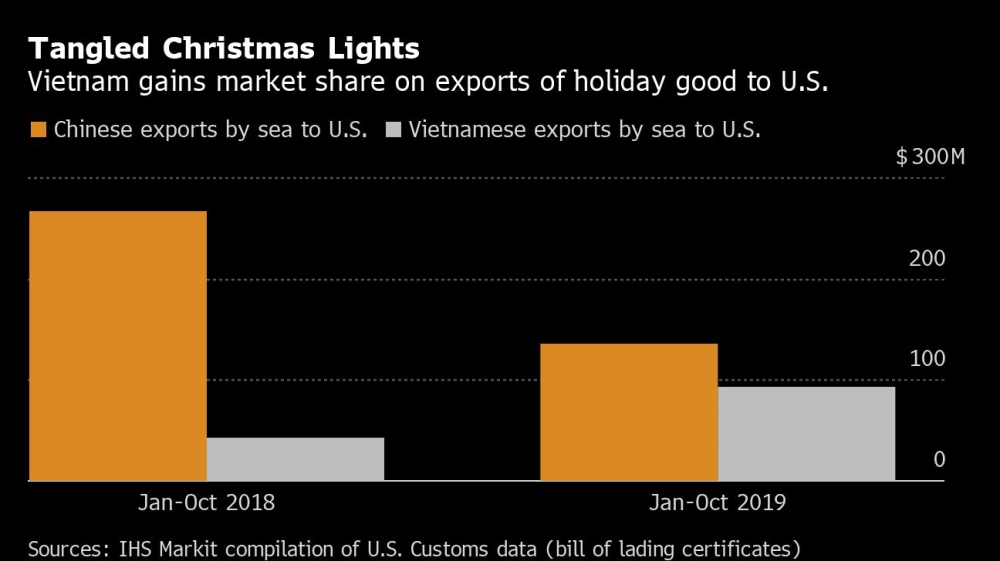 It’s a conclusion vividly illustrated in Vietnam, where a stretch of three consecutive blocks in Hanoi’s Old Quarter is flush with Christmas retail at this time of year.

“There are some local companies that brought material, parts from China and assemble them into these kinds of lights to sell,” said Nguyen Thi Ha, a 34-year-old shopkeeper along Hang Ma, which roughly translates to “Votive Street” for the ever-changing holiday retail offered throughout the year.

“They can’t produce by themselves because it will cost them way more than importing parts from China to assemble,” she said in Vietnamese through a translator.

In May the Trump administration slapped 25% tariffs on Christmas lights from China, up from 10% previously. The item isn’t covered by the phase-one trade deal the U.S. and China agreed on earlier this month.

For Au Anh Tuan, head of customs control and supervision in the General Department of Vietnam Customs, curbing the flow of illegal goods is a struggle. Through October, officials had uncovered about 14 significant cases of exports with fake labels this year.

“We’ve been working with the ministry of planning and investment in scanning thoroughly FDI from China and Hong Kong,” he said in a November interview in Hanoi. Chinese foreign direct investment into Vietnam grew by triple digits in 2019, data through November show.

Tuan said they’ve been looking at the investment value — and especially the scale of factories and technology use — to determine whether investors aim to “just set up a place to assemble all the parts they brought from China.” They also check whether the planned products are subject to U.S. tariffs, a clue that investors may be trying to evade the penalties. 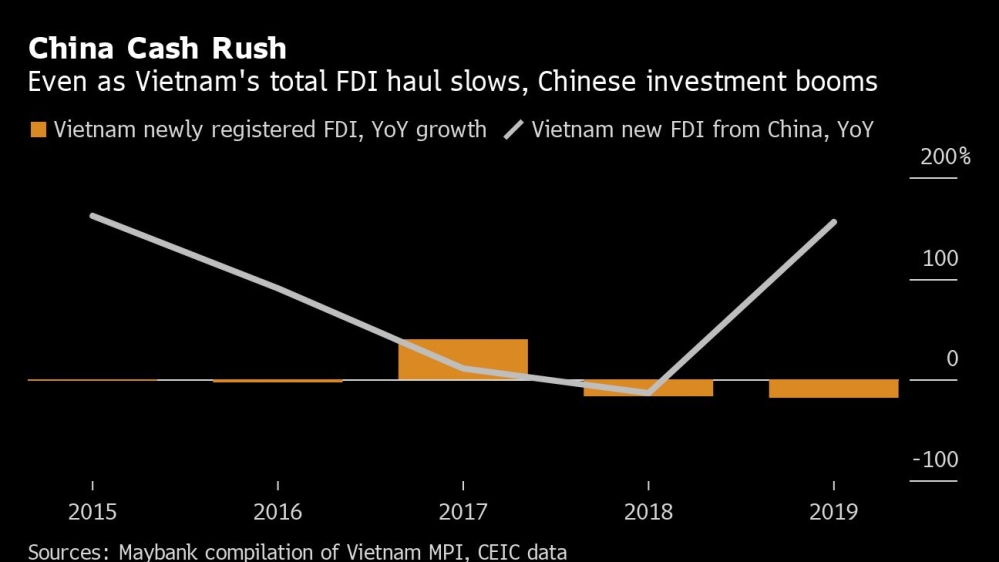 Several big-name companies like Kyocera Corp., Sharp Corp., and Nintendo Co. have invested in Vietnam since the trade war began, with others actively considering it. FDI into Vietnam is on track to reach $35 billion this year, around the same as each of the previous two years.

That success has come with a cost. Vietnam’s goods surplus with the U.S. climbed to $46.3 billion in the first 10 months of 2019 — a 39% increase from the same period last year — making it a target for the White House. Trump has called Vietnam a trade abuser, with the U.S. slapping tariffs of more than 400% on steel from Vietnam due to charges of illegal trans-shipment. 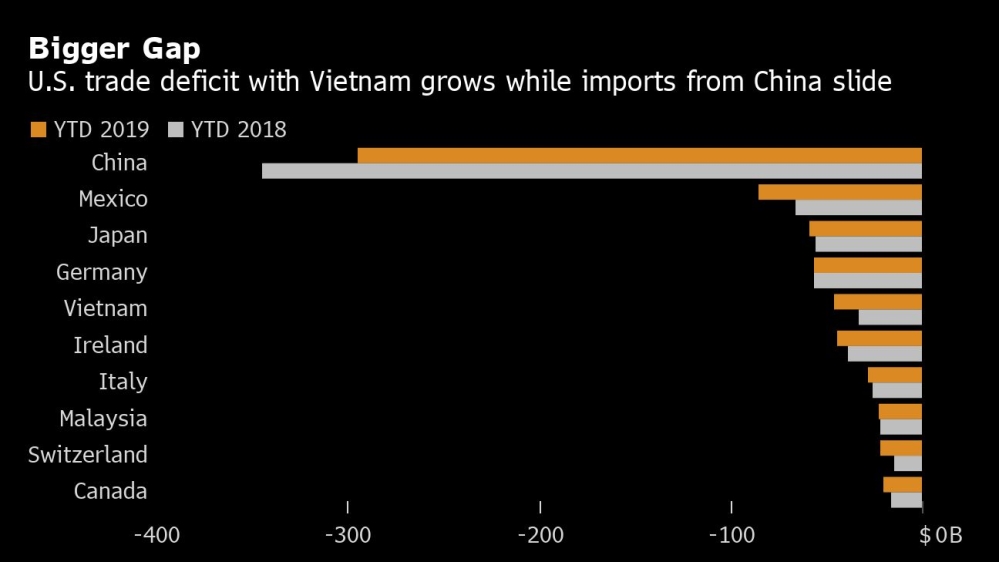 Source: US Commerce Department
Notes: Data are on Balance of Payments (BoP) basis and not seasonally adjusted; updated through October 2019 [Bloomberg]

In the meantime, businesses on the other side of the world remain troubled by their own painful supply-chain revisions — including around Christmas lights.

“It’s a large disruption to economies of scale that took years to establish,” said Frank Skinner, marketing director of Georgia-based Wintergreen Corp., whose company imports Christmas lights and other holiday decorations. “It’ll take several years for companies to work through this. For those companies like us who also have a huge seasonality demand curve, it’s that much more challenging.”