With an average score of 0,700 on a scale of 1, Vietnam is making little progress toward gender equality, according to 2019 Global Gender Gap Report released by World Economic Forum.

The report measured 153 countries and territories globally on economic participation and opportunity, educational attainment, health and life expectancy, as well as political empowerment.

Of the four, Vietnam did best in economic participation and opportunity, ranking 31st globally. Almost 80 percent of local women participate in the workforce, compared to 86.4 percent of men. 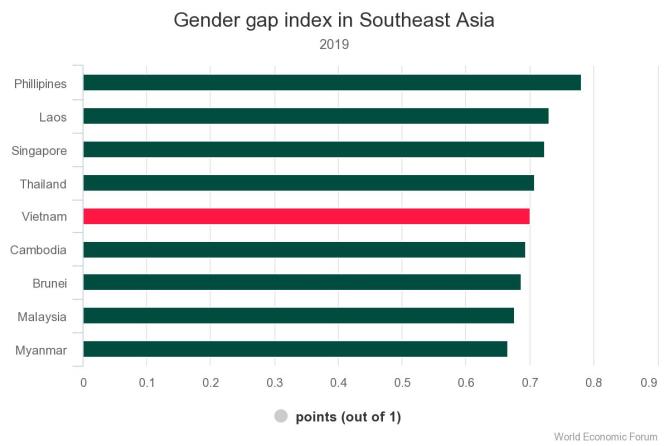 The proportion of Vietnamese women occupying professional and technical positions was 54.6 percent while men account for only 45.4 percent.

In terms of education, the country ranked 93rd globally, having made substantial improvements in ensuring access for women, among whom the literacy rate reached 93.6 percent compared to 96.5 percent of men.

However, political empowerment for women is still limited, standing 110th globally. Vietnamese women have a 26.7 percent share in parliament seats while only 4 percent hold ministerial positions.

This year, Vietnam performed worst in health and life expectancy, ranking 151st globally, with local women unable to gain the same access to health as men.

Iceland topped the list as the closest to eliminating its gender gap, followed by Norway, Finland, Sweden and Nicaragua. Yemen ranked worst for gender equality, followed by poor, conflict-torn Iraq and Pakistan.

The report stated that as a whole, the world had experienced some improvement in gender equality, thanks to a significant rise in female parliamentarians, ministers and even heads of state.

This improvement, however, has mostly occurred in Western Europe and South America, where gender parity, at the current rate, could be achieved in 54 and 59 years, respectively. Asia-Pacific, on the other hand, is estimated to take 163 years to reach the same level.