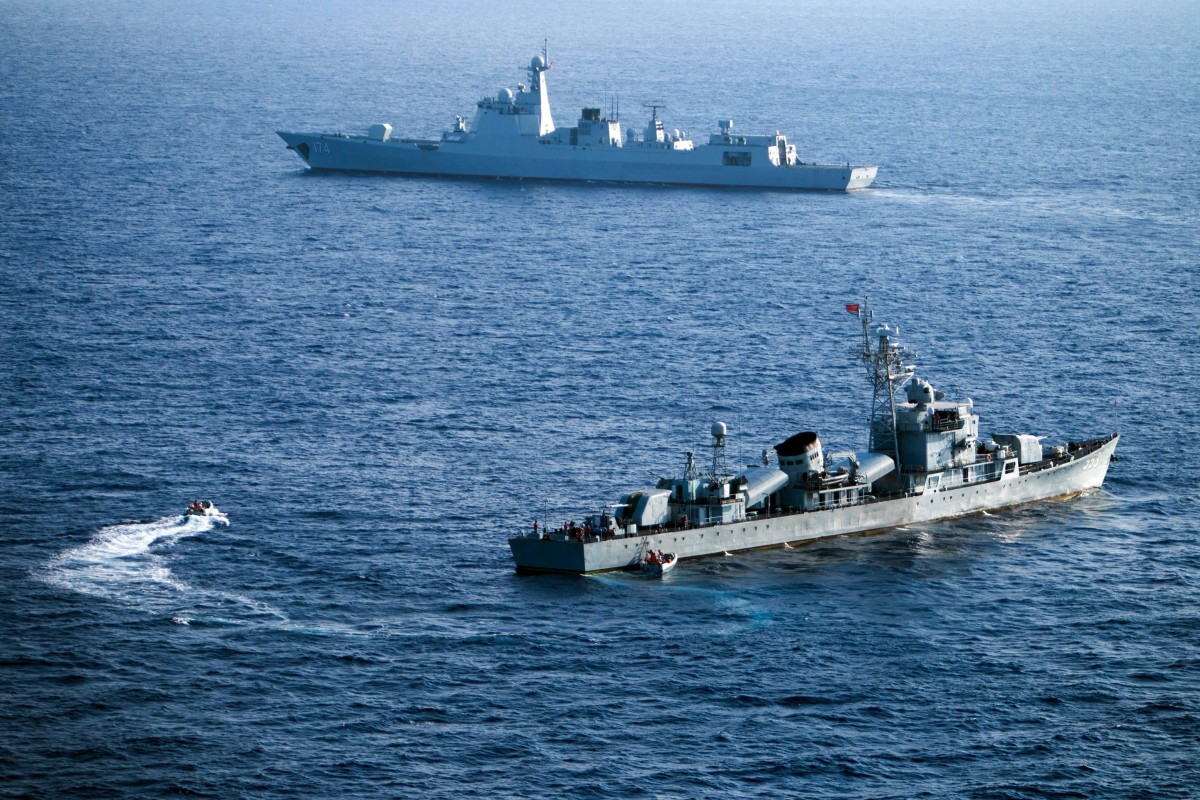 Chinese vessels during a previous military exercise near the disputed Paracel Islands in the South China Sea. Photo: AFP

China started a series of military training exercises near the Paracel chain of islands in the disputed South China Sea on Tuesday, amid growing tensions with Vietnam over the vital maritime trade route.

Ships were prohibited from entering three locations in and near the Paracels from Tuesday morning until Thursday afternoon, according to three brief notices published on the Maritime Safety Administration website on Monday. No details were given of the purpose of the training, nor which military units would be involved.

Tensions in the South China Sea re-emerged last month, with a week-long confrontation between Chinese and Vietnamese coastguard vessels around the energy-rich Vanguard Bank, after Chinese survey ship the Haiyang Dizhi 8 entered the area, which Hanoi has declared part of its exclusive economic zone.

Vietnam’s foreign ministry has also complained about the presence of Chinese coastguard ships near its oil rig operation off the Vanguard Bank.

Vietnam refuses to back down in South China Sea stand-off

On Tuesday, Vietnamese police said they had dispersed a brief protest outside the Chinese embassy in Hanoi, in which about 10 people demanded the departure of the Chinese ships from Vanguard Bank. The protest came just days after a Vietnamese fishermen’s association publicly urged the government to take stronger action to remove the ships, which it said had disrupted fishing in the area.

While observers said this week’s training could be part of China’s regular military exercises as Beijing seeks to consolidate its control of the Paracels – also known as Xisha in Chinese and Hoang Sa in Vietnamese – many believed it also could be a message to Hanoi.

Song Zhongping, a military analyst based in Hong Kong, said the Paracel chain was an important foothold for Beijing in the South China Sea.

“China can be expected to want to improve its defence capability in the waters near the Paracels, in response to challenges from countries like Vietnam, as well as the US with its freedom of navigation operations,” he said.

Song said China regarded the regular US operations sending surveillance ships and planes close to the 12 nautical mile limit of its claimed territory in the area as reconnaissance activity near its territorial waters, which also posed a threat to Beijing’s claims in the South China Sea.

Song said the military exercises also could be part of Beijing’s efforts to improve its search and rescue system in the Paracels, which are claimed by Beijing, Hanoi and Taipei.

Adam Ni, a China researcher at Sydney’s Macquarie University, said that, with no sign of Beijing or Hanoi stepping back from their dispute at Vanguard Bank, the Chinese drills would be interpreted as “a clear message” that China was willing to use force, if necessary, to defend its territory in the South China Sea.

“This is a clear message to Vietnam that a continuous stand-off with China, and a hard-line confrontation with Beijing in the South China Sea, would not be in Hanoi’s interest,” Ni said.

But, he added, Vietnam was unlikely to be deterred, especially when the ongoing dispute also involved a Russian oil company and a Japanese rig operator – as well as expressions of support for Hanoi from the US.

“To Hanoi, by backing down you are really condoning Chinese coercion so if it takes a soft line then Beijing would become more emboldened to coerce Hanoi in the future,” Ni said. 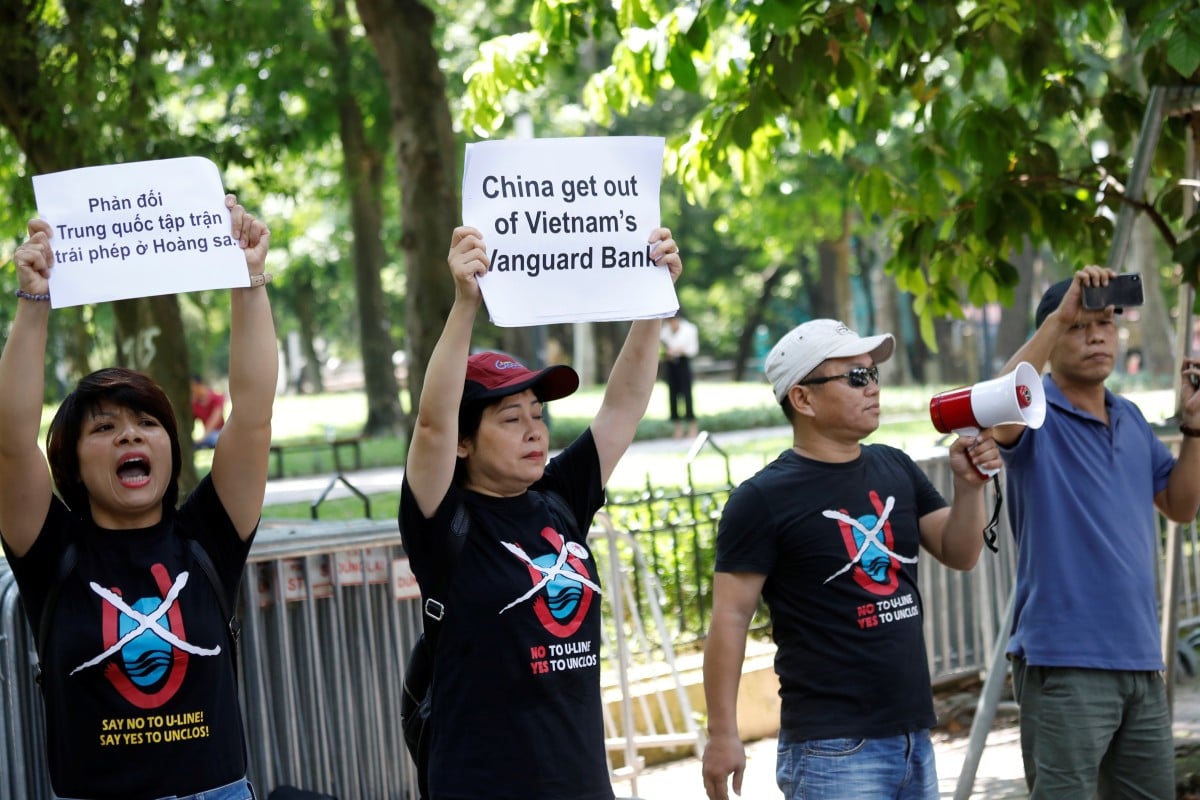 Vietnam refuses to back down in South China Sea stand-off

Anti-China protesters in front of the Chinese embassy in Hanoi. Photo: Reuters

Vietnamese police on Tuesday broke up a brief protest outside the Chinese embassy in Hanoi against Beijing’s maritime survey of an offshore block in the southeast Asian nation’s exclusive economic zone (EEZ).

near the oil block, the latest confrontation in waters that are a potential global flashpoint as the United States challenges China’s sweeping maritime claims.

Protests in the authoritarian and Communist-ruled Southeast Asian country are rare, and police dispersed the short-lived demonstration of about 10 activists of the “No-U” group within minutes.

“We are doing this in front of the Chinese embassy to show our anger to the world,” said Le Hoang, one of the protesters.

accuses Chinese survey vessel Haiyang Dizhi 8 and its escorts of illegal activities in the country’s exclusive economic zone and continental shelf, and has demanded that China withdraw all its ships.

Last week, a Vietnamese fishermen’s group urged the government to take stronger measures to remove the ships, saying they were disrupting fishing activities.

“I really hope that Vietnam will launch a lawsuit in the international court against China’s violations and its illegal nine-dash line,” Hoang added.
The “No-U” group takes its name from the U-shaped “nine-dash line” marking China’s claims in a vast expanse of the South China Sea, including large swathes of Vietnam’s continental shelf, where it has awarded oil concessions. 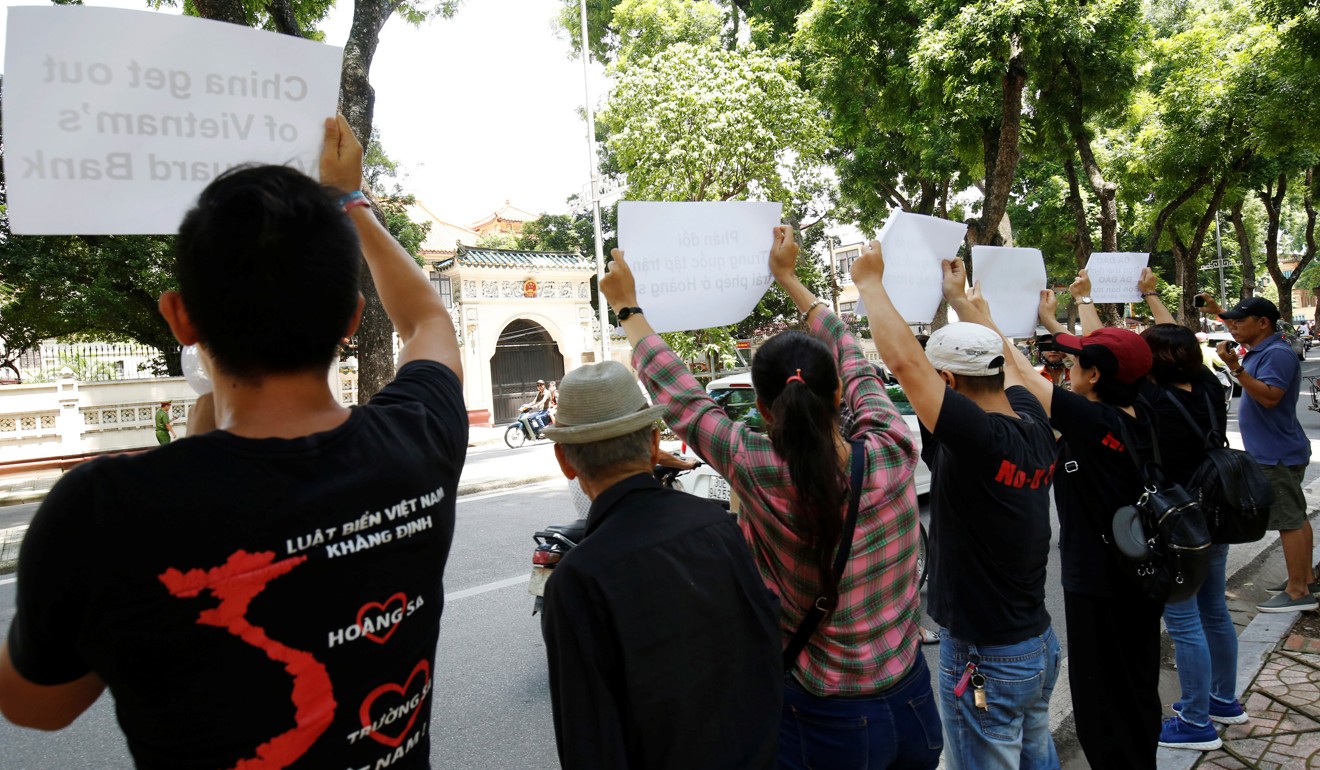 Anti-China protesters in front of the Chinese embassy in Hanoi. Photo: Reuters