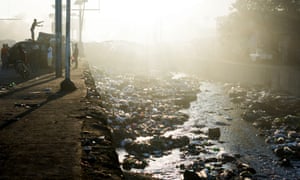 One of the biggest issues at the intersection of sanitation, poverty and global health, open defecation has also long been one of the hardest to represent visually.

For photographer Andrea Bruce, however, the challenge meant she did not have to think too long before agreeing to the year-long project documenting an issue both deeply sensitive and hugely important. The resulting photo essay, commissioned by National Geographic, has been selected for a first prize in the prestigious Pictures of the Year awards.

The US photographer, who has covered wars, and depicted the lives of sex workers in Baghdad after the US invasion in 2003, recalls: “To be honest, when they approached me and said, ‘We want you to do a story on open defecation,’ a million things went through my head.”

This is the time of day when women are often raped in India, Africa and Haiti​ – when [they] are most vulnerable

Bruce’s images – taken in India, Haiti and Vietnam – tell a compelling and dignified story about a global problem affecting 1.1 billion of the world’s poorest people.

Among that total, according to Unicef, are 524 million people in India – almost half the country’s population – where lack of sanitation is estimated to be responsible for more than a million deaths of children under the age of five from diarrhoea every year.

“The more I researched it,” says Bruce, “the more I realised how large a proportion of the world’s population is living in sewage and without clean water. More people die of health problems related to sanitation issues every day than do of malaria, HIV and the top five diseases combined.”

Although she says she “does not set herself boundaries” in advance when working on a photographic project, Bruce decided she would go with what her subjects found “acceptable”. She chose as the subject of her work in India a poor village where she had worked before, and was familiar to those who lived there.

“I had worked in the village before for the New York Times for a story on women and work, and people knew and trusted me. I know everyone in the village and they knew I was not going to be disrespectful.

“I wanted to make sure that it was something everyone can relate to so that it was about people not just about poverty.

“It is not only an issue about diseases that people are facing. For women, this is the time of day when women are often raped in India, Africa and Haiti – when [they] are most vulnerable and trying to find some privacy.”

The health issue was also dramatised for her in Haiti, where she arrived after Hurricane Matthew had devastated the country.

“It was kind of crazy timing. A huge hurricane came through and then you have contamination. One drop of cholera and it just sweeps through.”

She was particularly struck by the bayakou – latrine cleaners – whom she photographed for the project.

“In Haiti the people who are on the frontline are the bayakou who go into the latrines, which is this taboo subject.

“They can only work at night and people throw rocks at them even if they employ them. They are like the superheroes of Haiti. We also worked with a small NGO called Soil in Haiti, which brings composting toilets to slum areas and then collects them – like milkmen – to give to farmers to use as compost.”

And although the pictures are beautiful both as images and in their expression of a particular kind of vulnerability, Bruce adds that she was anxious to avoid the trap of exoticising the subject by emphasising its otherness to a western audience.

“For me it is not about making things exotic but to make them boring and important but still as beautiful as possible.”

Bruce has been back to the village in India since the images were first published – to a pleasant surprise.

“Since the pictures came out the Indian government has been to the village and they have built a community toilet. Who knows? Maybe they were going to come anyway but the the villagers are very happy.”