Chinese coastguard vessels maintain a near-constant presence around reefs claimed by Malaysia in the South China Sea, ship-tracking data shared with the Guardian has revealed.

The findings show the extent of Beijing’s military ambitions far south of its borders, antagonising south-east Asian countries and deepening a potentially explosive foreign policy crisis with the US president, Donald Trump.

During the first two months of 2017, three Chinese ships patrolled the Luconia Shoals, an area of islets and reefs that are more than 1,000 miles (1,600km) from mainland China and only about 90 miles (145 km) north of Malaysian Borneo.

The ships were traced by the Asia Maritime Transparency Initiative (AMTI), part of Washington’s Center for Strategic and International Studies, and the non-profit Center for Advanced Defense Studies (C4ADS).

The US-based groups said the two months were not unusual and were consistent with regular rotations of up to 11 Chinese patrol ships it had traced in the area since late 2015.

Control over the South China Sea, a route for half the world’s commercial shipping, has become a major international conflict point, with Beijing asserting sovereignty over maritime areas also claimed by Vietnam, Taiwan, Malaysia, Brunei, the Philippines and Japan.

The issue is expected to be high on the agenda for a meeting between Trump and the Chinese president, Xi Jinping, who will visit the US on Thursday.

Chinese vessels with armed personnel aboard that escort Chinese fishing boats have been spotted around Luconia Shoals before. Malaysian fishermen say these vessels have chased them away from the area. 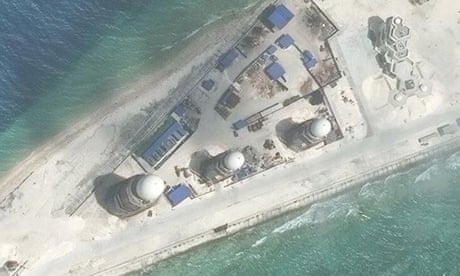 In 2015, Malaysia departed from its normally soft approach to the South China Sea dispute to protest against what it said was an intrusion.

The Chinese vessels were said to have withdrawn in late 2015 but AMTI and C4ADS said “it appears that Chinese ships returned almost immediately”. In March 2016, Malaysia summoned the Chinese ambassador to explain why a large number of China-flagged boats were in Malaysian waters.

During January and February this year, only one Malaysian government vessel patrolled the shoals, the AMTI and C4ADS said, adding that it came a close as four miles to a Chinese ship, “indicating that its purpose was likely to monitor the CCG presence”.

Malaysia’s ministry of defence did not respond to a request for comment.

The shoals, which remain under water at high-tide, are inside the 200 nautical mile exclusive economic zone claimed by Malaysia and are located between the hotly contested Spratly Islands to the north and James Shoal, which China often calls its southernmost territory, to the south.

China’s coastguard fleet is often armed with machine guns and can be placed under army control during wartime. The largest ship type operating in the Luconia Shoals is the 5,000-tonne Shuoshi II-class.

China denies it is militarising the South China Sea. 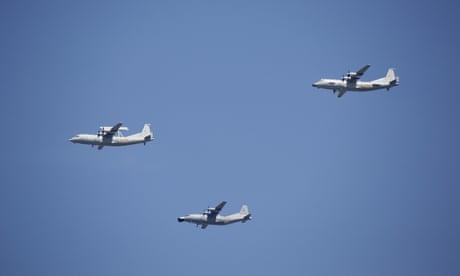 The US conducts regular air and naval patrols to assert its rights of passage. The US secretary of state, Rex Tillerson, said in January the US should block Chinese access to islands it has built in the South China Sea. A Chinese military aircraft had an “unsafe” encounter with a US navy surveillance aircraft over the area in February.

China has installed HQ-9 surface-to-air missiles at one island as well as anti-ship cruise missiles, AMTI said. It had also built enough hangars for 72 combat aircraft and several larger bombers.

The reclamation of the islands has also had a devastating impact on some of the world’s most biodiverse coral reefs.