(CNN)This was the week when the war in Ukraine truly transitioned from one nation’s bloody fight for liberation against Russia’s vicious onslaught to a potentially years-long great power struggle.

Every day brought a sense of grave, historic events and decisions that will not just decide who wins the biggest land war between two countries in Europe since World War II, but will shape the course of the rest of the 21st century.

President Joe Biden declared Thursday that two months of fighting in the war triggered by Russian President Vladimir Putin’s unprovoked invasion had brought the world to a critical point.

“Throughout our history, we’ve learned that when dictators do not pay the price for their aggression, they cause more chaos and engage in more aggression,” Biden said. “They keep moving. And the costs, the threats to America and the world, keep rising. We can’t let this happen.”Hawkish British Foreign Secretary Liz Truss was more blunt: “Geopolitics is back.”

Over just a few days, a new realization dawned in Washington, Europe, Kyiv and Moscow. The war is now transitioning into a long, bitter struggle, which will likely cost thousands more lives and tens of billions of dollars. The US strategy is now unequivocal and public — to weaken Russia to diminish its global threat. There are fresh signs of the Kremlin’s desire to eradicate Ukrainian culture in its pulverizing of eastern and southern cities. And Putin unleashed a new front — energy warfare — as he cut off natural gas supplies to Bulgaria and Poland in what the EU quickly branded “blackmail.”

As these conflicting aims came into focus, nuclear rhetoric heated up yet again, with Russia keen to warn of the implied power of its vast arsenal, and Washington trying to avoid an escalatory cycle that could lead to a direct superpower clash.

The carnage in Ukraine, meanwhile, goes on. Vicious attacks and sieges of civilian areas prefaced Russia’s new assault on the south and east — battles that could decide whether Ukraine survives as a nation. Yet this week also brought the first signs that Russians accused of atrocities could face accountability.

But the alarming reality that no credible diplomatic track exists to end the war was laid bare when Russian missiles slammed into Kyiv on Thursday while UN Secretary-General António Guterres was still in town on an apparently futile mission, which had begun earlier in the week with tense talks with Putin. 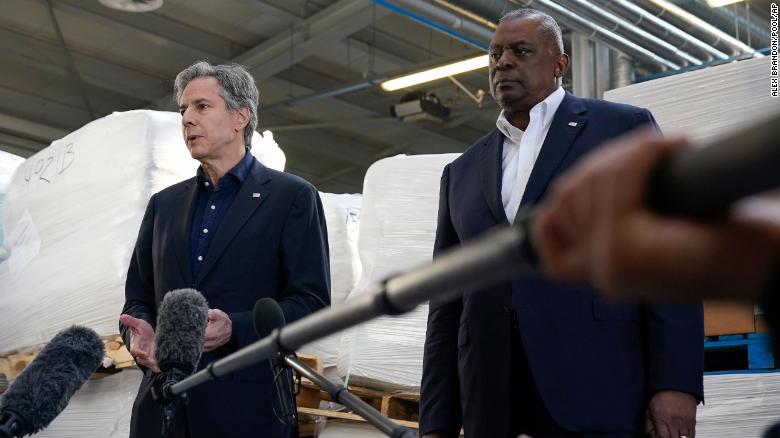 Secretary of State Antony Blinken and Secretary of Defense Lloyd Austin speak with reporters on April 25, 2022, in Poland.

A visit to Kyiv by Secretary of Defense Lloyd Austin and Secretary of State Antony Blinken under a news blackout on Sunday set the stage for a week in which the West threw itself ever deeper into what looks like a proxy war with Russia.

The President’s request underscored how the war in Ukraine is not just a defining stand of his administration but that the events of recent days will cause political, economic and geopolitical chain reactions that will be impossible to predict and difficult to control.

The strategic broadening of the war was accompanied by a new round of alarming nuclear rhetoric from Moscow.

While casual talk about the use of the world’s most dangerous weapons might be designed to scare Western populations, it nevertheless underscored that the possibility of a disastrous clash between the world’s two most powerful nuclear nations — the United States and Russia — will exist as long as the war drags on.

Some US experts dismiss the Russia tough talk as a sign that Putin is frustrated by failing to fulfill his strategic goals in Ukraine. But it also serves to remind Western leaders that their massive injection of arms into Ukraine could come up against Putin’s hard-to-define red lines and cause a dangerous escalation. And fears linger that if he is pushed into a corner, Putin could deploy one of Russia’s smaller-yield tactical nuclear weapons on the battlefield in Ukraine.

The carnage gets worse 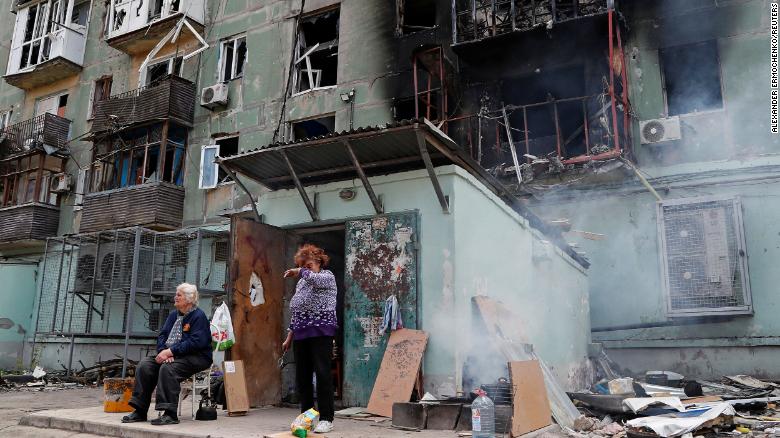 Local residents are seen outside an apartment building damaged in Mariupol on April 28, 2022.

The Russian effort to control eastern and southern Ukraine and to strangle the country by cutting off its access to the Black Sea — a new phase of Moscow’s war strategy after failing to capture Kyiv — is intensifying. But one thing hasn’t changed. Ukrainian civilians are bearing the brunt of the horror in an expression of Putin’s resolve and cruelty. Russian soldiers are also apparently paying an extraordinary price for their leader’s obsession with Ukraine. 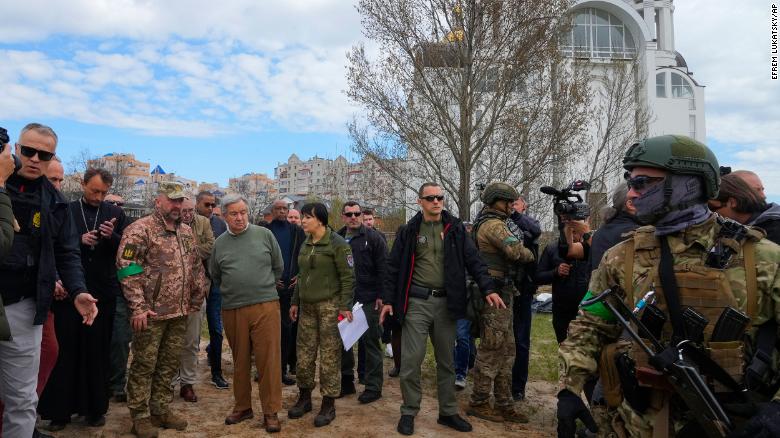 UN Secretary-General António Guterres, fourth left, is seen during his visit to Bucha, on the outskirts of Kyiv, on April 28, 2022.

The big diplomatic hope of the week was the trip by the UN’s Guterres to both Moscow and Kyiv. But neither side seems to see a rationale for talking right now. This is partly due to Ukraine’s understandable mistrust of Putin after his unprovoked invasion. But there is also a sense in Ukraine and in western capitals that Putin’s indifference to the bloody cost of his war is a clear sign that he is committed to grinding on until he has reasonable grounds to declare some kind of victory that is not yet in sight.

The dispiriting reality at the end of a defining week for the West and Russia is that peace in Ukraine may be further away than it has been since the invasion. And while the West can send a torrent of arms, ammunition and aid into the country, it cannot end a war that will send painful and dangerous political, military and economic shock waves around the world for months to come. Only Putin can do that.

As Guterres put it in his interview with CNN’s Anderson Cooper, “The war will not end with meetings. The war will end when the Russian Federation decides to end it and when there is a serious political agreement. We can have all meetings but that is not what will end the war.”