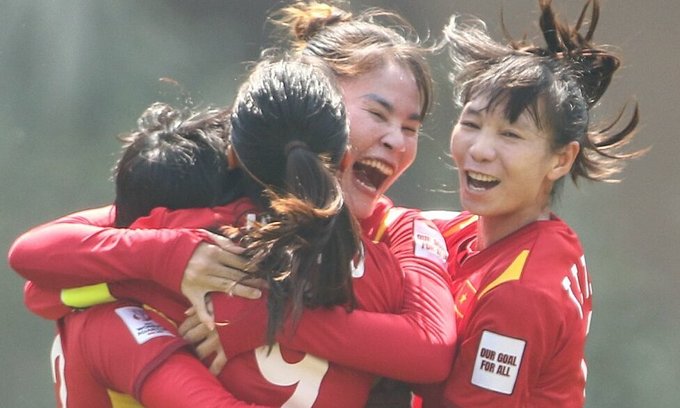 Playing in DY Patil Stadium in India, Vietnam opened the score in the seventh minute as Chuong Thi Kieu accurately headed the ball into the rival’s net after receiving a corner pass from Tuyet Dung.

The goal boosted the fighiting spirit of the Vietnamese women for the remainder of the match.

Goalkeeper Kim Thanh’s net was shaken in the 20th minute after a wrong pass by Phuong Thao. Taiwan’s brightest star, Su Yu-Hsuan, made the pass to Chen Yen-Ping who cushioned the ball into goal. The move was disallowed by the referee since the ball had already been out of touch.

In the second half, Vietnam focused on defending, with Kieu successfully blocking many attacks.

Taiwan managed to equalize in the 50th minute. Wu Wai-Ching ran past many Vietnamese defenders before passing the ball down for Su Yu-Hsuan to finish.

But only six minutes later, Vietnam regained the lead. Thanks to Thai Thi Thao’s precise pass, Bich Thuy managed to kick the ball straight into the opponent’s net.

The final whistle of referee Yoshimi Yamashita created a historic moment for Vietnamese women’s football, with the team bound for 2023 Women’s World Cup hosted by Australia and New Zealand in July next year.