Vietnam’s rapid economic growth and its increasing energy demand have led to an exponential increase in GHG emissions, leaving the country with the second highest air pollution levels in Southeast Asia in 2019. To meet its development and climate change goals, the new domestic carbon emission trading scheme enabled by Vietnam’s revised Law on Environmental Protection aimed to create a carbon pricing instrument that will penalize emitters of GHG emissions based on the principle of “polluter pays.”

The carbon emission trading scheme (ETS) envisioned creating a market instrument through which production facilities, localities, and countries seeking to reduce their contribution of GHG emissions could buy credits to offset their actual GHG emissions. The carbon pricing mechanism would be supported by complementary policies and instruments such as the national GHG inventory system, monitoring, reporting and verification (MRV) system, National Registry. In line with international best practices, the Vietnam ETS was expected to be applied to big emitters first before being scaled up to encompass smaller entities.

The rising air pollution levels amounted to over 60,000 deaths in 2017. Reducing emissions would therefore save thousands of lives in Vietnam.

Second, reducing emissions through a carbon pricing instrument would help reduce the impact of climate change and in turn reduce the pressures of environmental degradation. Vietnam has been particularly vulnerable to climate change: extreme weather events have been occurring more frequently and rising sea levels threatened to flood important economic zones in the coastal areas, potentially forcing millions of Vietnamese to relocate.

Vietnam aimed to reduce nine percent of its GHG emissions compared to business as usual with domestic resources as envisioned in their Nationally Determined Contributions (NDCs) and could potentially increase its reductions to 27 percent from business as usual with international financial support. At COP26 in Glassgow, Scotland, Vietnam’s Prime Minister Pham Minh Chinh announced that Vietnam aims to achieve net-zero emissions by 2050. The adoption of carbon pricing was expected to help deliver on these reductions while supporting the country as it tapped into its substantial renewable energy potential and transitioned to a low-carbon development model.

Third, carbon pricing mechanisms could raise revenue for the state budget and encourage greener and cleaner innovation technologies that will reduce emissions. The trading mechanism was expected to  create incentives for businesses to invest in solutions for GHG emission reductions and support achievement of the common goals.

Should Vietnam fall short of developing a domestic carbon market and fail to achieve decarbonization required to meet the EU requirements, then EU carbon standards could become a barrier for many Vietnamese exports to the European Union and many other markets. Besides, EU bilateral cooperation with other national carbon emission programs such as China’s could put Vietnamese exporters at a competitive disadvantage.

With support from the PMR project, a Vietnamese delegation from different line ministries and the National Assembly visited California Environment Protection Agency to learn about their experiences in developing the Carbon Cap and Trade Program in August 2019.

The pathway to a carbon pricing market

World Bank support has played an important role in setting the stage for Vietnam’s carbon pricing initiative. The World Bank has closely partnered with Vietnam in developing efficient low-carbon programs since 2016 as part of the Partnership for Market Readiness (PMR) Program, which was established to drive the development of a domestic carbon pricing mechanism. In addition to Vietnam, the program has been supporting 22 countries in designing carbon pricing policies and carbon markets suitable to each country’s circumstances. In Vietnam, the program provided US$3 million to strengthen the Government of Vietnam’s capacity to develop market-based instruments to reduce greenhouse gas emissions.

Through the program, the World Bank supported the government in assessing institutional, policy, and technical gaps and opportunities for implementing a carbon pricing approach in Vietnam. It also helped develop the main building blocks for carbon pricing at the national level including data collection, measuring, reporting, and verifying, and the crediting process.

This work reflected the strong commitment of the Government of Vietnam to develop a domestic carbon market, through constructive stakeholder consultations and extensive discussions among relevant stakeholders including the World Bank, Vietnam’s Ministries of Natural Resources and Environment, Industry and Trade, Construction, Finance, and Planning and Investment.

Over five years of implementation, the World Bank has provided international experience, technical assistance, and capacity building support to relevant government agencies in preparation for launching a carbon pricing market.

Looking ahead, the World Bank will continue to support the government in implementing carbon pricing instruments. The government requested continued support from the Partnership for Market Readiness Program for implementation and development of national policies and programs to enable the development and implementation of a national crediting program and emission trading system, including a pilot crediting program in energy-consuming sectors and the solid waste sector.

The Partnership for Market Readiness Program has helped pave the way for legislation stipulating the creation of an emissions trading system in Vietnam, which came into being thanks to a consensus across government agencies in favor of developing a carbon market and promoting decarbonization. The newly adopted Law on Environment Protection also sets the stage for the private sector to begin their preparation with regard to GHG emission reduction. 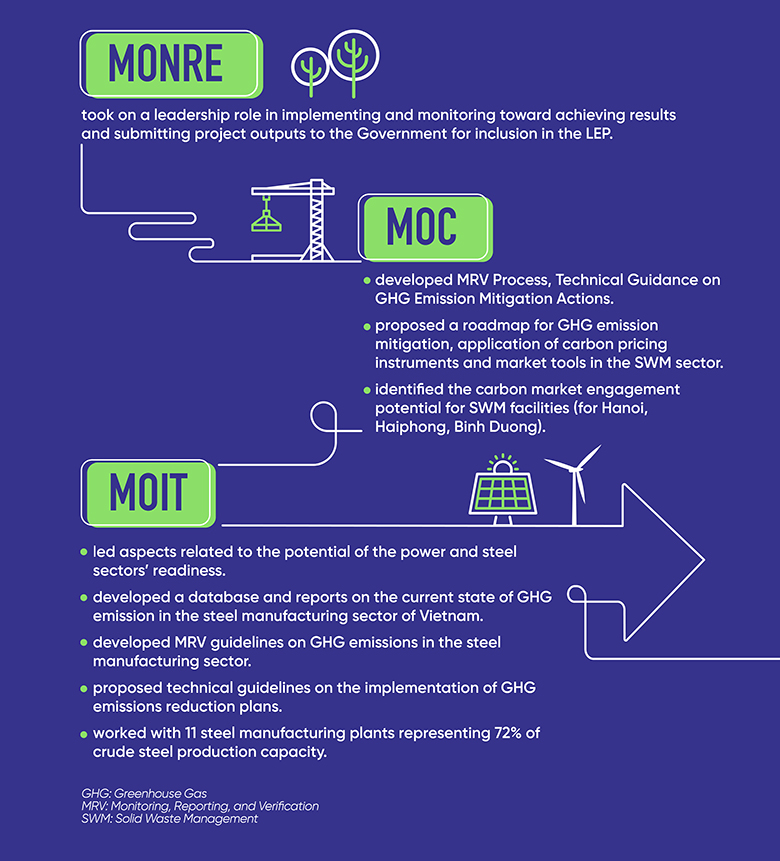