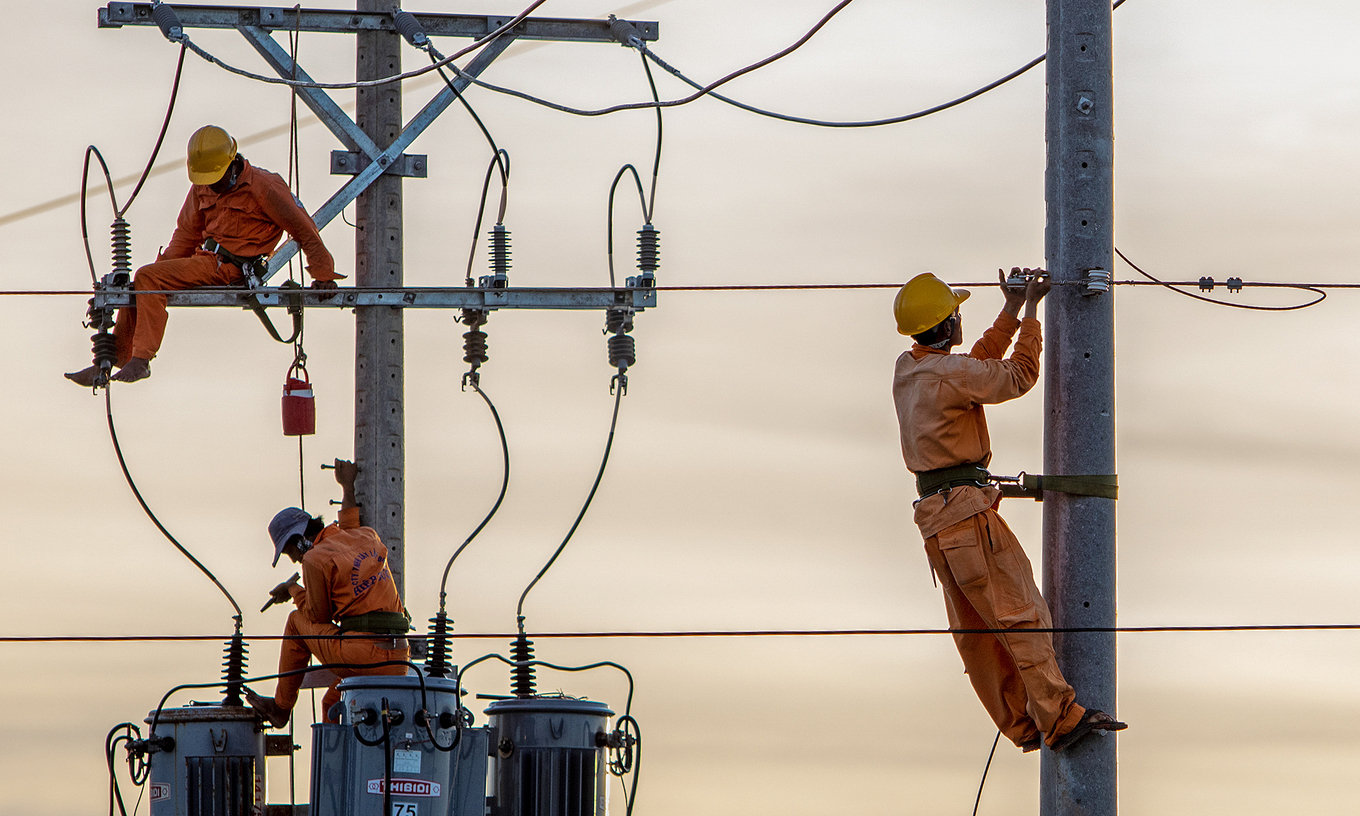 Electricians work on the poles in southern Bac Lieu Province, May 9, 2020. Photo by VnExpress/Nguyet Nhi.

With its energy deficit rising every year, several experts are advising Vietnam to reconsider the shelved nuclear power program.

Nuclear energy is one of the recommendations made by experts as the Industry and Trade Ministry (MoIT) gathers public inputs for its 2021-2030 National Energy Master Plan (with orientation towards 2050).

TOKYO — Antagonism between the U.S. and China has moved beyond trade and technology and is now intensifying in the financial sector as well.

Global attention has been drawn to the Hong Kong Autonomy Act, signed into law by U.S. President Donald Trump. It imposes sanctions, including seizure of assets and exclusion from dollar-denominated account settlements, on officials and entities in the city and mainland China that are deemed to aid in the violation of the former British colony’s guaranteed autonomy.

There have been a series of rhetorical attacks directed at the CCP from high-ranking US officials since late June.Advertisement

The Trump administration has taken concrete actions to decouple bilateral relations by closing the Chinese Consulate General in Houston, sending Health Secretary Alex Azar to Taiwan and attempting to ban Chinese social-media giants TikTok and WeChat in the United States.

READ: Commentary: A Digital Iron Curtain may be descending between the US and China

China’s reactions have been surprisingly conciliatory given its reputation for tit-for-tat actions against the United States.

In an interview with Xinhua in early August, China’s Foreign Minister Wang Yi firmly rejected the idea of a new Cold War and proposed easing current tensions through dialogue “at any level, in any area and at any time”.

Two days later Yang Jiechi, Director of the Office of Foreign Affairs of the CCP, published an article titled Respect History, Look to the Future and Firmly Safeguard and Stabilise China–US Relations.

Yang praised the legacy of US engagement with China — pioneered by the Richard Nixon administration — and called for more “mutually beneficial cooperation in all fields”.

China’s goodwill diplomacy seems too little too late because no one in the Trump administration is taking it seriously. Beijing’s call for dialogue is falling on deaf ears in Washington in part because any such communication is seen as diplomatic kowtowing by the United States.

But this interpretation of Chinese diplomacy seems overly simplistic. Chinese culture and history offer a better way to understand the three messages China intends to convey to salvage relations with the United States.

CHINA DOES NOT WANT CONFLICT

First, China does not want a Cold War with the United States. Wang Yi remarked that China was not the former Soviet Union and it had no intention of becoming another United States.

This might be wishful thinking from the CCP, but it takes two to tango, and China has said it wants to avoid the Cold War trap that ensnared the Soviet Union and the United States.

Wang and Yang highlighted the good old days of US–China relations after Richard Nixon’s 1972 visit to remind their US counterparts that the two countries co-existed by transcending their ideological differences. This is a taichi response to the punches thrown by the “four horsemen”.

READ: Commentary: The biggest IPO in history is happening but millions may miss out

READ: Commentary: Why doesn’t India have as many tech unicorns as China does?

THE US CANNOT GO ALONE

The second message is that the United States is unable to wage this Cold War alone. China wants to make it clear to US allies — including five-eyes countries Australia, New Zealand, the United Kingdom and Canada — that it has no intention to fight a new Cold War with the United States.

By striking a conciliatory tone, China aims to reduce the likelihood of the United States building a coalition against it. China’s anti-Cold War effort can also be seen in Wang Yi’s recent visits to five European countries.

Other interested countries — especially US allies — will need to choose whether to turn the Cold War into a reality or treat it as an illusion of the four horsemen.

While the Trump administration is trying to checkmate China through short-term confrontation, Chinese leaders are playing a game of Go insofar as they are seeking to position themselves for future advantages. This avoids direct confrontation in a game of high stakes, even if it forsakes short-term gains.

THE DANGERS OF CONFLICT

The third and final message is a warning to the international community about the danger of a potential conflict between the United States and China.

There are worries about the guns of August in the Asia Pacific — any strategic miscalculation or military accident might trigger a hot and potentially nuclear conflict in the South China Sea, East China Sea or over the Taiwan Strait.

The recent visit by US Health Secretary Azar to Taiwan may have led to Chinese military exercises around the Taiwan Strait as well as the carrier killer missile test in the South China Sea.

An early and sincere call for international cooperation during the pandemic is potentially China’s way of taking the moral high ground in preparation for something more heated with the United States.

READ: Commentary: The hope for change in a Biden-Harris US election win

Will China’s messages cut through to the United States? Will China behave according to the gentle signals it is trying to convey?

The coming months before the US election will be critical for US–China relations. It is time for the United States and China to work together to avoid a real, even if accidental, conflict.

Kai He is Professor of International Relations at the Griffith Asia Institute and the Centre for Governance and Public Policy, Griffith University. This commentary first appeared in The Conversation.
Source: CNA/sl

Whoever wins in the US on November 3, there will be a new normal in US-China ties. There will be new opportunity for India if it builds on its Comprehensive Global Strategic Partnership with the US, to consolidate a ‘trusted partner’ status, or ‘supply chain resilience’

On August 7, under the United States International Emergency Powers Act, US President Donald Trump issued an executive order banning, after 45 days, any transaction by a US entity with TikTok, and its parent company ByteDance. The order cited need to secure the information and communications technology and services supply chain, and asserted that “spread in the United States of mobile applications developed and owned by companies in China continues to threaten the national security, foreign policy, and economy of the United States”.

Concerns listed included TikTok automatically capturing vast swathes of information from users about network activity, location data, browsing and search histories. This, in turn, enabled the Chinese Communist Party (CCP) to get Americans’ personal and proprietary information, with the potential for future blackmail and corporate espionage. Among its justifications for arriving at this assessment, the order specifically referred to recent Indian government action banning TikTok. In a subsequent order of August 14, ByteDance was given 90 days to divest itself of all its properties in the US.

Several years earlier, Chinese hackers had been suspected to have stolen personal data of nearly 15 million US federal officials, and insurance-related data of more than 100 million people in US.

The US action against TikTok followed earlier steps against Chinese technology companies Huawei and ZTE, controlling any further access by them to US technology, equipment, software etc. It was followed by restrictions on US entities using Weibo and WeChat. The US has also been running an aggressive international campaign to prevent use of Huawei in 5G rollouts, with some success so far in Europe and Asia.

The Chinese had so far been restrained in their responses, recognising the continued US technology inter-linkages for many of their leading companies, and not wanting to provoke the unpredictable Trump as he headed into a difficult re-election campaign. In the TikTok case, however, they have barred any sale of AI-related technology, and the algorithm used by the App — a clear signal of some countervailing technology power.

In an article in the May issue of The Atlantic, HR McMaster, a former Trump national security advisor, cited Chinese Premier Li Keqiang telling Trump in November 2017 that “China, having already developed its industrial and technology base, no longer needed the US….its role in the future would merely be to provide China with raw materials, agricultural products, and energy to fuel its production of the world’s cutting- edge industrial and consumer products”.

It can now be legitimately asked if the US-China economic and technology rivalry has finally crossed the Rubicon, and if some measure of decoupling is inevitable. The US has been struggling with its China policy for more than a decade now. For a long time, mainstream opinion supported ‘integrating China into the international mainstream’, which was assessed as leading to inevitable economic and political liberalisation. This did not happen.

China gamed the WTO and international trading systems, initially keeping the Yuan devalued, and then subsidising heavily its State-owned enterprises, and building excess capacity in many areas, including steel. It sponsored national champions in technology. Under President Xi Jinping, China abandoned the Deng Xiaoping era policy of ‘hide your strength and bide your time’, and threw the gauntlet through its China Dream, and Made in China 2025, seeking to make China a leading global high-tech manufacturer.

Trump has, no doubt, seized on a sharp anti-China rhetoric as electoral strategy, hoping to retain the votes of his 2016 base, which had seen its jobs vanish under globalisation, and to deflect the anger of those impacted by COVID-19. At the same time, his administration has taken the strongest measures, since the 1971 US opening to China, on tariffs, trade, technology denial, sanctions against Chinese officials and others for their actions in Xinjiang, Hong Kong, Tibet, and the South China Sea.

Aside from Trump, many senior US officials, including the Vice-President, have made sustained statements calling out China on cyber hacking, disinformation, intellectual property theft, forced technology transfers, human rights violations, and transgressions of international law. Democratic Presidential candidate Joe Biden issued a statement on September 3, asserting that as US President he would “put values back at center of American foreign policy”, meet with Dalai Lama, and appoint a Special Coordinator for Tibetan issues.

Whoever wins in US on November 3, there will be a new normal in US-China ties. Tech rivalry and reordering of supply chains will continue. There will be new opportunity for India if it builds on its Comprehensive Global Strategic Partnership with the US, to consolidate a ‘trusted partner’ status, or ‘supply chain resilience’ in areas of strength such as digital and pharma, or in new tech areas such as AI, cyber, quantum and big data.