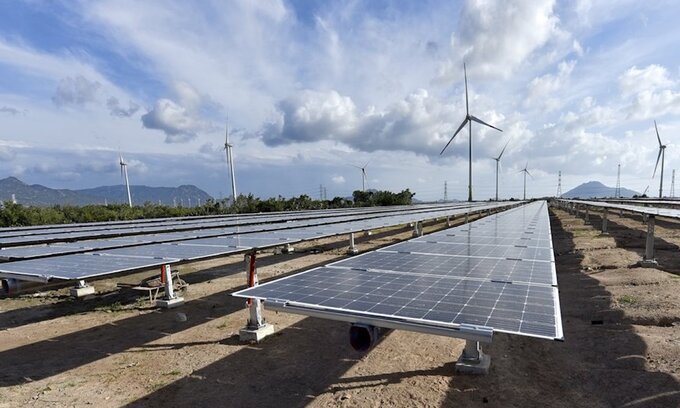 Solar panels seen in a complex in the central Binh Thuan Province. Photo by VnExpress/Tran Trung.

National utility Vietnam Electricity (EVN) has said in a recent report that the construction of new transmission lines might not be able to match the speed of new solar and wind power projects.

END_OF_DOCUMENT_TOKEN_TO_BE_REPLACED

10.09.2020 ~ Đào Thu Hằng ~ Bình luận về bài viết này
mckinsey.com
COVID-19 has interrupted the country’s journey to become a high-performing economy, but the right structural adjustments could help get it back on track.
This is the second of two articles in which McKinsey looks at COVID-19’s immediate impact on Vietnam’s economy and identifies the long-term challenges the country can address to realize its potential.With relatively few recorded COVID-19 cases and fatalities to date, Vietnam now has an opportunity—and an imperative—to consider its longer-term economic aspirations, even as the country responds to a resurgence of the virus. Enduring success will require Vietnam’s leaders to focus on issues and opportunities that long preceded the pandemic.
END_OF_DOCUMENT_TOKEN_TO_BE_REPLACED
10.09.2020 ~ Trần Đình Hoành ~ Bình luận về bài viết này

Clean Cities, Blue Ocean (CCBO) is USAID’s flagship program for combatting ocean plastic pollution. The program works globally to target ocean plastics directly at their source, focusing on rapidly urbanizing areas that contribute significantly to the estimated eight million metric tons of plastic that flow into the ocean each year.

Hong Kong (CNN Business)Disney has publicly thanked a Chinese government agency accused of human rights abuses in Xinjiang for its help in making “Mulan” — a revelation that has provoked a storm of criticism online.Disney (DIS) acknowledges several Chinese government bodies in the credits for the live-action remake of the 1998 animated picture of the same name, but a few in particular have raised red flags: The Xinjiang government’s publicity department and the Public Security and Tourism bureaus for Turpan, a city of about 633,400 people just outside Xinjiang’s capital Urumqi.Disney did not respond to a request for comment from CNN Business to its media inquiry line, and to US press officers about the film and the credits. It’s not clear how much of “Mulan” may have been shot in Xinjiang, though people who worked on the movie have said on social media and in interviews that they scouted and filmed locations there.The US State Department estimates that since 2015 as many as two million of the Muslim-majority Uyghurs and other Turkic minorities have been imprisoned in enormous re-education camps in Xinjiang.The Turpan Public Security Bureau has been listed by the US government as an organization involved in “human rights violations and abuses” in the region.Beijing has long defended the crackdown in Xinjiang as necessary to tackle extremism and terrorism, and said it is in line with Chinese law and international practice, calling accusations of mass detentions a “groundless lie” and “sensational rumor.” A spokesperson for the country’s foreign ministry on Tuesday reiterated its defense of what it calls its Xinjiang “vocational skills education and training centers.” CNN Business has reached out to the Xinjiang government and Turpan’s tourism bureau, but Turpan’s Public Security bureau could not be reached for comment.

U.S. Customs and Border Protection officials have prepared orders to block imports of cotton and tomato products from western China’s Xinjiang region over allegations they are produced with forced labor, although a formal announcement has been delayed.

The Trump administration announcement of the actions, initially expected on Tuesday, has been put off until later this week because of “scheduling issues,” a CBP spokesman said.

The cotton and tomato bans along with five other import bans over alleged Xinjiang forced-labor abuses would be an unprecedented move by CBP and likely stoke tensions between the world’s two largest economies.

The “Withhold Release Orders” allow the CBP to detain shipments based on suspicion of forced-labor involvement under long-standing U.S. laws aimed at combating human trafficking, child labor and other human rights abuses.STORY CONTINUES BELOW ADVERTISEMENT

President Donald Trump’s administration is ratcheting up pressure on China over its treatment of Xinjiang’s Uighur Muslims. The United Nations has said it has credible reports that 1 million Muslims have been detained in camps in the region, where they are put to work.

China denies mistreatment of the Uighurs and says the camps are vocational training centers needed to fight extremism.

CBP Executive Assistant Commissioner Brenda Smith told Reuters that the effective import bans would apply to the entire supply chains involving cotton, including cotton yarn, textiles and apparel, as well as tomatoes, tomato paste and other products exported from the region.

“We have reasonable but not conclusive evidence that there is a risk of forced labor in supply chains related to cotton textiles and tomatoes coming out of Xinjiang,” Smith said in an interview. “We will continue to work our investigations to fill in those gaps.”STORY CONTINUES BELOW ADVERTISEMENT

U.S. law requires the agency to detain shipments when there is an allegation of forced labor, such as from non-governmental organizations, she said.

The bans could have far-reaching effects for U.S. retailers and apparel producers, as well as food manufacturers. China produces about 20% of the world’s cotton and most of it comes from Xinjiang. China also is the world’s largest importer of cotton, including from the United States.

The China Cotton Association, a trade body, declined to comment on Wednesday.

“If Xinjiang cotton goes to the domestic industry and non-Western markets, the impact may be limited, it can probably still be digested,” he said.

In the short-term, it could also boost cotton imports into China, he added.STORY CONTINUES BELOW ADVERTISEMENThttps://df7719edd330f16da50a98d8c70a9d62.safeframe.googlesyndication.com/safeframe/1-0-37/html/container.html

In March, U.S. lawmakers proposed legislation that would effectively assume that all goods produced in Xinjiang are made with forced labor and would require certification that they are not.

In July, Washington issued an advisory saying companies doing business in Xinjiang or with entities using Xinjiang labor could be exposed to “reputational, economic, and legal risks.”

In a draft announcement seen by Reuters, the CBP said it identified forced-labor indicators involving the cotton, textile and tomato supply chains “including debt bondage, unfree movement, isolation, intimidation and threats, withholding of wages, and abusive working and living conditions.”STORY CONTINUES BELOW ADVERTISEMENT

In addition, the proposed CBP orders would block imports of products made at the Lop County Industrial Park as well as the Lop County No. 4 Vocational Skills Education and Training Center. The moves follow the detention on July 1 of hair extensions and other goods from the Lop County Meixin Hair Product Co..

The CBP orders would also block imports of computer parts made by the Hefei Bitland Information Technology Co Ltd, based in Anhui, China.

WASHINGTON/BEIJING (Reuters) – The United States has revoked visas for more than 1,000 Chinese nationals under a May 29 presidential proclamation to suspend entry from China of students and researchers deemed security risks, a State Department spokeswoman said on Wednesday.