The Central Steering Committee for Anti-Corruption held its 17th session on January 15 under the chair of Party General Secretary, President and head of the committee Nguyen Phu Trong, to look back at its work in 2019 and line out key tasks for 2020.
VNA Wednesday, January 15, 2020 16:29 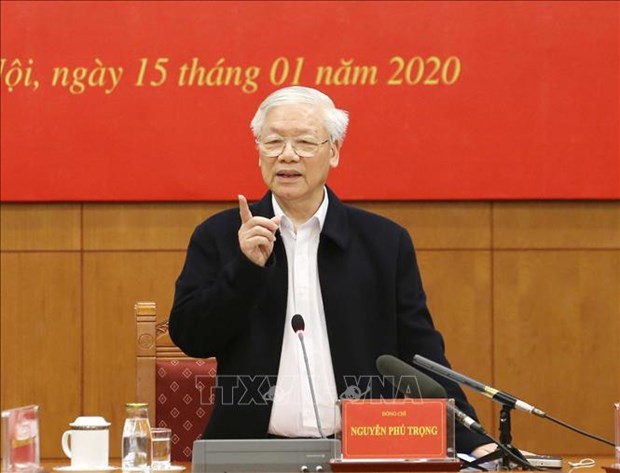 Hanoi (VNA) – The Central Steering Committee for Anti-Corruption held its 17th session on January 15 under the chair of Party General Secretary, President and head of the committee Nguyen Phu Trong, to look back at its work in 2019 and line out key tasks for 2020.

Looking back at the year 2019 and the time since the 12th National Party Congress, the committee agreed that the anti-corruption fight has made strong advances with more evident results, winning approval of cadres, Party members and the people.

Corruption has been step-by-step curbed and shown a declining trend, contributing to maintaining political stability, promoting socio-economic development and enhancing the country’s position and prestige on the international arena.

Party General Secretary Nguyen Phu Trong underlined that the steering committee had focused its instruction on completing institutions of socio-economic management and corruption prevention and combat, towards making it impossible for committing corrupt acts.

During 2019, the Party Central Committee and its Politburo, Secretariat have issued nearly 30 documents on strengthening the Party and political system and preventing and fighting corruption, the National Assembly has passed 18 laws, 20 resolutions; the Government and the Prime Minister have issued 100 decrees, 119 resolutions, 37 decisions and 33 directives to enhance the efficiency and effectiveness of State management across the fields of social life, helping preventing negative phenomena and corruption.

Since the beginning of the tenure, the Party Central Committee and its Politburo, Secretariat have issued nearly 80 documents, the National Assembly has passed 63 laws and ordinances, 66 resolutions; the Government and the Prime Minister have issued 611 decrees, 523 resolutions, and 197 decisions to strengthen the corruption preventive mechanism.

The inspection, auditing, investigation, prosecution and trial work has been intensified, resulting in new breakthroughs in discovering and handling corrupt acts.

The investigation and handling of corruption and economic cases have becoming stricter and more effective. In 2019, the central steering committee for anti-corruption supervised and instructed the handling of 67 legal cases and 55 other cases. It is noteworthy that 10 serious cases of public concern have been brought to first-instance court

Since the start of the tenure, the committee has instructed the handling of 107 legal cases and 90 other cases, with 53 cases put on trial.

Delegates at the session were unanimous that the steering committee should focus its instruction on improving weak links in the anti-corruption fight such as appraisal and valuation of assets, recovery of assets in corruption and economic cases. They also urged intensifying the prevention of pet corruption, and pushing actions at ministries, agencies and localities.

Many opinions highlighted positive changes in educational and communication activities on fighting corruption, with functional agencies proactively releasing information on issues of public concern. The Vietnam Fatherland Front and its member organisations continued to well perform their role of supervision and social criticism, and the media actively promoted communication campaigns with article, special columns and forums on corruption.

Party General Secretary Trong said the outcome is attributable to the high resolve from the highest to the lowest levels, united leadership, appropriate methods and smooth coordination among involved agencies and links. The support of the public and the engagement of the mass media are also important factors.

He stressed that the organisation of Party congresses at all levels in 2020 is not the reason for relaxing efforts to fight corruption. On the contrary, the fight should be intensified to serve the 13th National Party Congress.

According to the Party leader, the focus of the work ahead is to continue perfecting institutions for socio-economic management and anti-corruption efforts, and to research and propose major orientations for corruption prevention and combat in draft documents of the 13th National Party Congress.

He required the steering committee to press on with the inspection and auditing of sensitive fields of public concern, timely detect and punish officials and Party members violating the law, and intensify the inspection of anti-corruption performance by top position holders in Party committees, Party organisations and administrations at all levels.

Trong also urged accelerating the handling of serious corruption and economic cases, naming 10 cases of public concern to be settled in 2020, such as the violation of land management regulations at Sabeco in District 1, Ho Chi Minh City, and the violation of regulations on State asset management and use related to the project at No 8-12 Le Duan street in HCM City’s District 1, among others.

The steering committee was also required to create stronger and more consistent changes in the fight against corruption at grassroots level and effectively curb pet corruption in the time ahead./.