Hong Kong (CNN)Chinese officials and state media have reacted with fury to the almost-unanimous passage of the Hong Kong Human Rights and Democracy Act by the US House of Representatives on Wednesday.

Though the bill has yet to go before US President Donald Trump for consideration, China wasted little time in condemning the vote, with the state-owned People’s Daily describing it as “a piece of waste paper,” and a “serious provocation against the entire Chinese people” in an editorial published Thursday.
“If the US side goes its own way, China will take effective measures to resolutely counteract it, and all consequences must be fully borne by the US,” the editorial said.
The potential showdown risks undermining ongoing trade talks between Washington and Beijing during a critical juncture. Trump, who has yet to confirm whether he will sign the act, has so far appeared reticent to challenge China on the issue of Hong Kong, even promising Chinese President Xi Jinping in October that the US would remain silent on the city’s ongoing pro-democracy protests while trade talks continued.
The US government treats semi-autonomous Hong Kong, which has its own legal and political systems, differently from the Chinese mainland when it comes to trade and export controls. Should it become law, the Hong Kong Act would require the US government to annually confirm that those freedoms were being maintained by Beijing — failure to do so could result in Washington withdrawing the city’s special trading status, a massive blow to the Hong Kong economy.
Additionally, the bill also lays out a process for the President to impose sanctions and travel restrictions on those who are found to be knowingly responsible for arbitrary detention, torture, forced confession of any individual in Hong Kong, or other violations of internationally recognized human rights in the Asian financial hub. 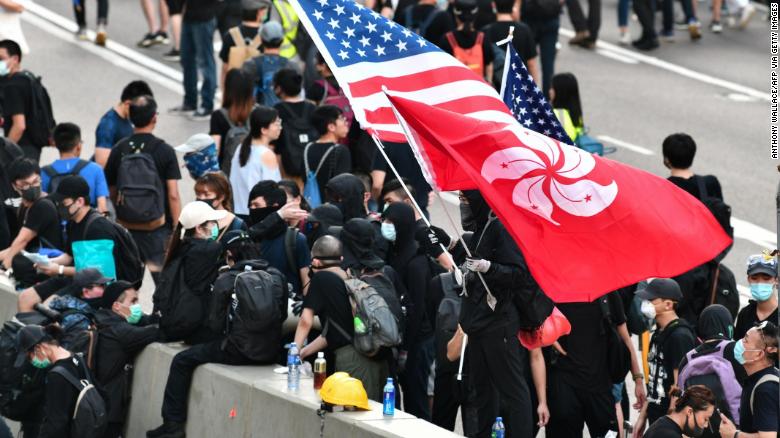 A man waves a US and Hong Kong flag while standing on a divider after he and other protesters occupied Harcourt Road while marching against a controversial extradition bill in Hong Kong on July 21.

The legislation, which is aimed at safeguarding freedoms in Hong Kong, comes as protests in the city near their sixth month.
Chinese state-run media has been ramping up its criticism of the Hong Kong protests as the demonstrations have grown increasingly violent in recent weeks, even as momentum has sped up for the legislation in Washington.
Writing in his daily newsletter, Sinocism, China expert Bill Bishop, said that state television CCTV had 11 segments criticizing the US and the legislation during its evening news on Wednesday night.
State-run tabloid the Global Times said instead of the Hong Kong Human Rights and Democracy Act, it should be called the “Support Hong Kong Violence Act.”
The Chinese government has repeatedly called on the US to stop “interfering” in their internal affairs, even accusing Washington repeatedly of being partially behind the lengthy demonstrations in Hong Kong.
Speaking in Beijing on Wednesday, Foreign Ministry spokesman Geng Shuang called the bill a “serious violation of international law” and said the Chinese government opposed and condemned it.
“I’d like to stress once again that Hong Kong is part of China, and Hong Kong affairs are China’s internal affairs. We urge the US to grasp the situation, stop its wrongdoing before it’s too late, and immediately take measures to prevent this act from becoming law,” he said.
The legislation has already passed the US Senate in its current form, meaning it now heads to the White House for President Trump’s signature. But despite the strong support in the US Congress, there is no indication at this stage whether or not Trump will sign it.