Even as China turns away from coal-fired power domestically, its financial institutions continue to fund coal plants overseas, including in countries like Vietnam, which have great potential for wind and solar power generation A a child on a Saigon waterbus brandishes a pinwheel as he passes Landmark 81, Vietnam’s tallest building, in Ho Chi Minh City on June 6. While Vietnam has enormous potential for wind and solar power generation, funding for coal-power electricity plants under China’s Belt and Road Initiative could derail its renewable energy push. Photo: Reuters

Since its unveiling in 2013, Chinese President Xi Jinping’s US$1 trillion global infrastructure

has struggled to deflect mounting criticism over its lack of

More recent criticism has focused on allegations of “

”, of using the initiative to load debt on to poor countries which then struggle to repay, ultimately forcing them to

control of strategic economic and military assets, such as ports, railways and power plants, to China in lieu of payment.

One criticism of the initiative which needs far more attention concerns its environmental consequences, particularly emanating from the power sector. As Beijing continues to

its domestic coal-fired power plants and shift towards cleaner

Should these promises be met, those poorer countries could account for some 50 per cent of global emissions by 2050, according to a forthcoming report by Tsinghua University in Beijing.

Chinese President Xi Jinping is keenly aware of the environmental concerns surrounding his signature initiative and attempted to allay those fears at a forum held in April,

the Belt and Road “aims to promote green development”. Despite the fine words and the country’s credentials as a leader in renewable energy, it appears Xi’s pledge to support green development does not currently rule out ongoing support for dirty power.

China’s track record overseas so far has not been clean. Between 2000 and 2017, the China Development Bank and China Export-Import Bank together provided some

in finance to coal projects overseas. Of course, some countries face greater risk from pollution than others, and Vietnam may be the nation most at risk given the number of coal-fired power plants financed or to be financed by China. As this centrally planned country transitions to more of a market economy, electricity demand is projected to increase by 8 per cent annually until 2025.

To meet the growing demand, Vietnam needs 96,500 megawatts of electricity by 2025. Chinese banks have so far provided

in funding for 14 coal-fired power plants from 2000 to 2018, an amount greater than any other country taking part in the Belt and Road Initiative.

Though long wary of its northern neighbour, Vietnam stands ready to accept vast sums from Beijing to build electricity generation capacity. With a total proposed coal-fired capacity of 13,380 megawatts, Vietnam attracts the fourth-highest proposed Chinese funding (US$3.6 billion) and is second only to Bangladesh as the country with the most capacity under development with Chinese financing.

While Vietnam clearly needs the electricity, its choice to turn to coal-fired generation runs counter to any government-led efforts to clean up its environment and is no longer the cheapest alternative, according to IEEFA. The institute “considers more private investment in cheaper zero-emissions energy to be a smarter path forward, rather than blindly agreeing to investment in outdated and expensive coal-fired plants backed by governments intent on filling their own coffers “. 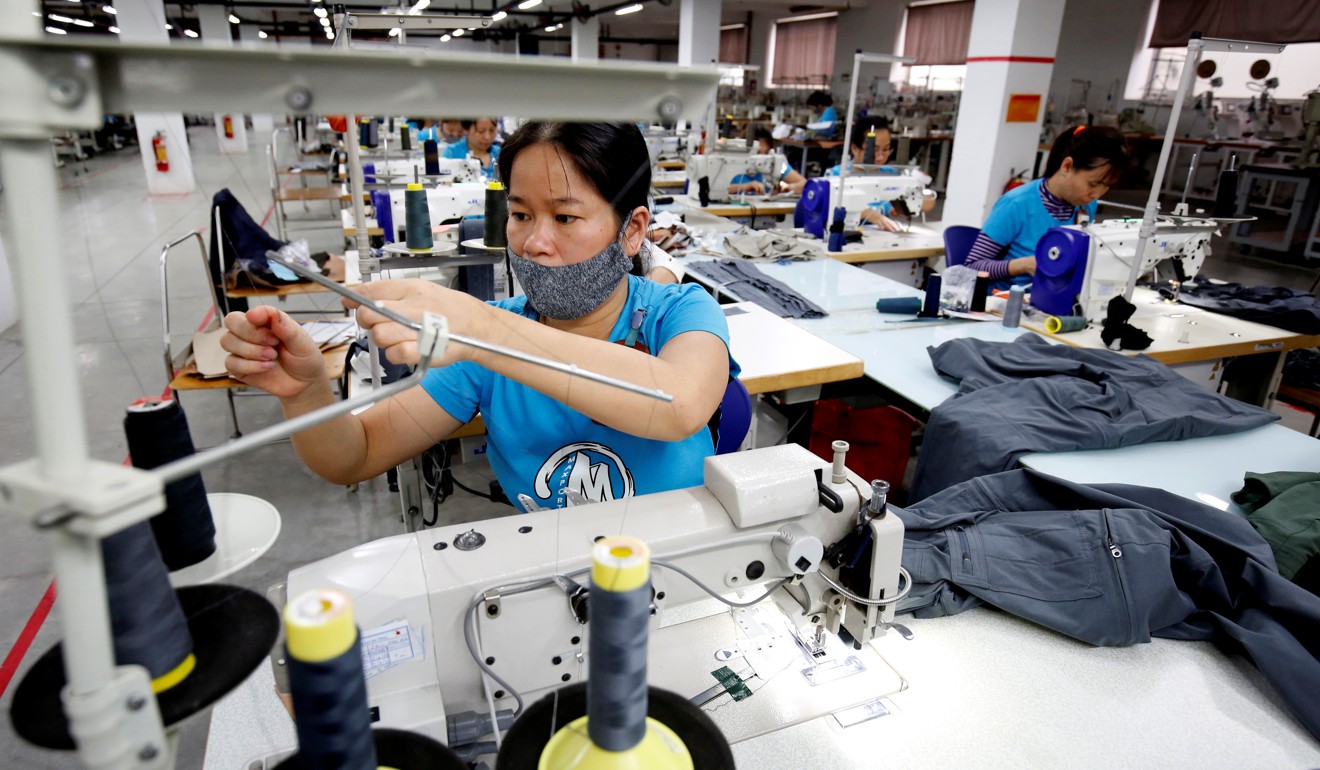 Labourers work at an export garment factory in Hanoi, Vietnam, on March 20. To meet the growing demand, Vietnam needs 96,500 megawatts of electricity by 2025. Photo: Reuters
Share:

Unlike many countries, Vietnam has enormous potential for wind and solar power generation, with some 1,600 to 2,700 hours of sunlight per year and average wind speeds of 7-11 metres per second between Quy Nhon and Ho Chi Minh City. Despite its potential, renewable energy has struggled to gain traction in Vietnam. Total installed wind power capacity is only around 190 megawatts from four wind farms onshore and near shore.

Solar energy is seriously lagging behind much of the region, with a mere 8 megawatts of installed capacity, though interest among developers is growing fast, and small-scale rooftop solar power projects are being developed.

Vietnam clearly has an ideal opportunity to tap into its abundant wind and solar potential, but greater levels of green investment are being constrained by relatively low payments to households or businesses generating electricity through renewable means, power purchase agreements that involve high local risks, the perceived credit risk of EVN, the sole purchaser of electricity, and a general lack of technical expertise among local developers.

In recent years, there has been an abundance of international assistance on offer for Hanoi to help tackle these difficult issues, from bankable power-purchase agreement templates to partial guarantees, yet Vietnamese regulatory authorities may find it far easier to again succumb to the money on offer from Beijing and renewable energy projects will be displaced by dirtier coal.

Unless and until belt and road funding for coal-fired power is withdrawn or Hanoi changes its approach, Vietnam will remain a laggard in the development of renewable energy in the region and continue to put its environment and people in jeopardy.

Gary Sands is a senior analyst at Wikistrat, a crowdsourced consultancy, and a director at Highway West Capital Advisors, a venture capital, project finance and political risk advisory

This article appeared in the South China Morning Post print edition as: Hanoi must come clean