The Rainforest Action Network (RAN) says consumers have been “deceived” by promises from the brands to clean up their supply chains which were subsequently delayed, revised or watered down.

Laurel Sutherlin, a spokesman for the group, told the Guardian: “For too many years, Nestlé, Mars and Hershey have cherry-picked their [palm oil] targets and then moved the goalposts when they don’t achieve them. There’s just no further room for error to prevent the extinction of tigers, orangutans and elephants.”

The last parcel of Sumatran rainforest in which these three species all roam – along with rhinos, clouded leopards and sun bears – is vanishing at a dramatic pace as lucrative palm oil plantations illegally eat into tropical forestland.

The brands source palm oil from this 2.6m hectare Leuser region, via complex supply chains, some involving traders linked to suppliers illegally logging in the region.

Nestlé promised to end deforestation in its supply chain by 2015 in response to Greenpeace’s KitKat campaign of 2010. After Ran’s “Snack food 20” report, this was upgraded to a pledge of “no sourcing from areas converted from natural forests after 1 February 2013”. The target was missed.

“Four years later we can now trace over 90% of our palm oil back to the mill of origin and almost two thirds back to the plantation level,” said Nestlé spokeswoman Peggy Diby. “Our ambition is to raise this figure to 100% by 2020, back to plantation.” 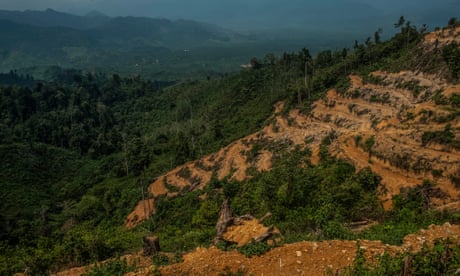 In July, Nestlé told the Guardian it could only source 47% of its palm oil to plantations, suggesting a big improvement in the last three months.

Jeff Beckman, Hershey’s communications director said: “While we remain deeply committed to pushing all stakeholders to accelerate traceability and bring full transparency to this supply chain along with our supplier partners, we realised it would take more time to achieve this goal than originally anticipated.”

Mars did not respond to a request for comment, despite a promise of “cutting suppliers trafficking conflict palm oil by the end of 2015,” which campaigners claim has not been met.

Gemma Tillack, Ran’s campaign director said: “It is our view that the brands have deceived consumers by continually claiming to be tackling deforestation when they have not executed the actions required to achieve a moratorium on the forest frontlines of their global supply chains.”